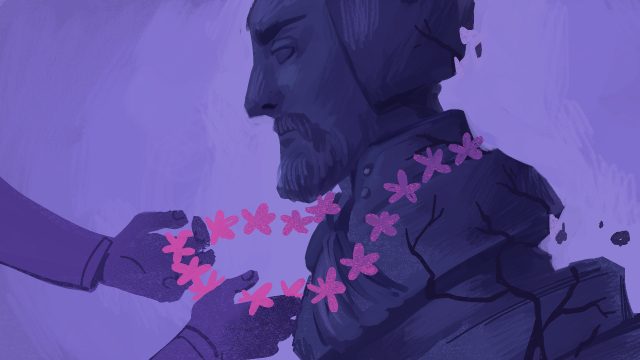 Interesting times we’re living in. Observe the current crisis surrounding historical monuments the world over in the wake of the murder of George Floyd (among others before him) in the US, as well as the racial reckoning so eloquently demanded by all the global protests against it. (READ: US House approves removing Confederate statues from Capitol)

The broader context of this latest historical push towards symbolic decolonization applies to all countries, including the Philippines. At its most basic level, the issues revolve around the relationship between monuments and historical commemoration. Who or what do these monuments celebrate, and what do they leave out? More pointedly, what do they erase and what do they choose to celebrate and canonize?

In looking at our heritage, perhaps we need to go beyond the conventional urge to merely add to collections and archive objects according to an accepted “nationalist narrative.” (READ: [OPINION] Appreciating the Filipino identity through our literature and culture)

How do we in the Philippines address questions of memory and memorialization?

To begin with, we might ask, what is a monument? As Karl Marx once said, contradiction is the motor of history. It turns the past into an open-ended site of struggle. Monuments are attempts to resolve the contradictions of history in favor of producing a unified, monolithic account. They rise to suture the open wounds of the past. But, often, they fail to close those wounds.

Perhaps we need to step back, going beyond the how and the what, into the WHY. It’s time, perhaps, to question our own assumptions, looking at what Terry Eagleton once described as the “ideology of the aesthetic.” His point is that texts can only be properly understood in the context of their historical circumstances or the “conditions of their production.” Edward Said raised a similar point, adding that the aesthetic ideology of the West tends to depict the “Orient” as its Other, at once menacing and enabling, different yet subordinate.

Not just hallmarks of civilization

The value of this kind of cultural criticism is that it gives us the methodological tools to study structures and relations of power. It allows us to think of monuments not simply as hallmarks of civilization but also, as Walther Benjamin once wrote, as “documents of barbarism.” By monumentalizing heroes, do we also fetishize them, turning them into idols to be worshipped rather than as important human beings with their own respective flaws and weaknesses?

It is useful to look at these questions in the context of UNESCO, which tries to foster global peace by igniting intellectual partnerships between and among nations. While many of its original principles and conventions are deeply laudable, it cannot be denied that the international agency tends to subscribe to “Enlightenment” notions of what constitute heritage and beauty. For instance, in its World Heritage (WH) description of some of the pyramids of Egypt, there is little discussion about the fact that they were built by slaves.

Perhaps Elizabeth Betsy Keough is too scathing and dismissive, but her thoughts merit consideration: “At its best, the WH program is characterized as teetering on its once sound foundations as its principles and priorities crumble under the weight of bureaucracy and outside influence… At its worst, the program has left its original aims in the dust in favor of materialism and pacification, and is now incapable of protecting the world’s truly endangered places.”

Equally, Lynn Meskell observes: “Often critiqued for its inherent Eurocentrism, UNESCO and its WH program today remain embedded within modernist principles of ‘progress’ and ‘development’ and subscribe to the liberal principles of diplomacy and mutual tolerance. However, its mission to prevent conflict, destruction and intolerance, while noble and much needed, increasingly fall short…”

This is not the space to critique UNESCO, which continues to have great value, in my opinion. My point, simply, is that, in such a context, the Philippines often tends to be seen as merely derivative and marginal compared to other “monumental” cultures.

What might be an alternative view? Rather than think of the absence of monuments in the Philippines, perhaps we can think of the presence of another set of traditions to mark and commemorate the past.

Here anthropology can be very useful. William Henry Scott in “Pre-Hispanic Source Studies for the Study of Philippine History,” points out that, given the absence of a centralized state structure, much less an empire in pre-colonial societies, there was neither the technology nor the social need for monuments. Rather than a monumental tradition, there existed an ornamental one characterized by elaborate practices of weaving, jewelry making, tattooing and decorative dentistry, etc., that focused on the body as the bearer of status.

My own view is that the importance of the ornamental and functional over the monumental tends to be overlooked because of the preoccupation with WH sites among certain actors in the Philippine state. But I would argue that our strengths lie precisely in the areas of Intangible Cultural Heritage (ICH) and other forms of UNESCO inscription.

The problems with ICH in the Philippines merit a deeper discussion elsewhere, but they ARE often tied to notions of romanticism (for an idyllic, primordial, pristine past, as opposed to an organic, contemporary one), which regrettably some key gatekeepers in government still cling to, despite all the theoretical work that has already been done by cultural critics the world over. (READ: [OPINION] The slow death of Philippine history in high school)

This is why, during my time as Secretary-General of the UNESCO National Commission of the Philippines (UNACOM), my staff and I also focused on other registers of UNESCO recognition beyond WH.

I am happy to say that, with the help of other agencies, we were able to get four UNESCO designations for the country: in ICH, Creative Cities and Memory of the World. (In 2019, the “buklog” of the Subanen was inscribed in UNESCO’s Intangible Cultural Heritage of Humanity in Need of Urgent Safeguarding. That same year, Cebu was named a UNESCO Creative City of Design. In 2018, the Culion Leprosy Archives in Palawan were inscribed in the UNESCO Memory of the World Asia-Pacific Register. In 2017, Baguio was named a UNESCO Creative City of Crafts and Folk Art).

In my opinion, these national achievements are as important as WH inscriptions, since they reflect the vibrant culture of particular Filipino communities.  – Rappler.com

Lila Ramos Shahani is the former Secretary-General of the UNESCO National Commission of the Philippines. She has served the government for 13 years under three presidential administrations.