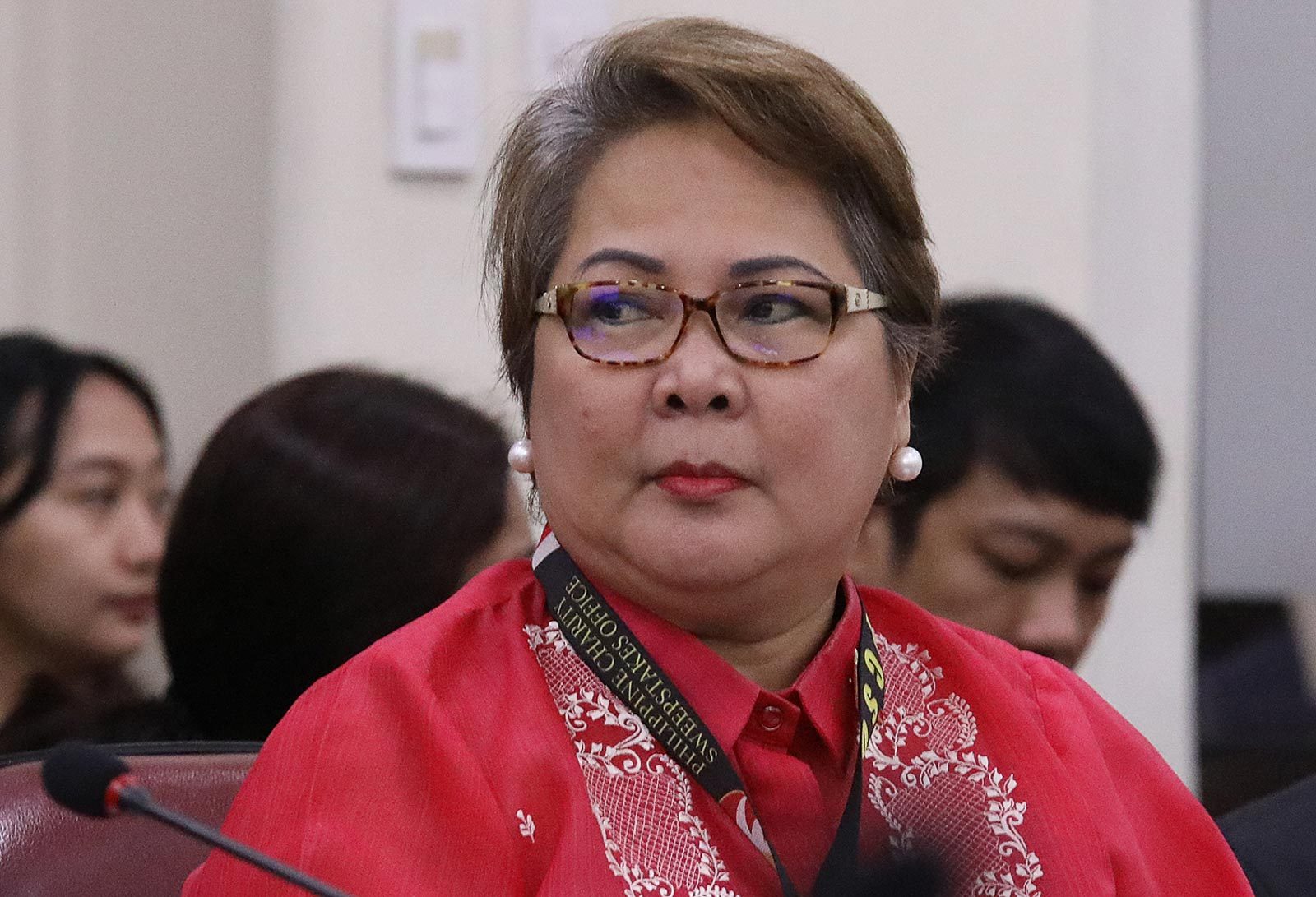 PCSO member of the Board Sandra Cam during a congress inquiry on February 26, 2020, on the update by the Philippine Charity Sweepstakes Office (PCSO) on the status of its Peryahan ng Bayan games and small town lottery. Photo by Darren Langit/Rappler

Facebook Twitter Copy URL
Copied
'The queen of scam Sandra Cam now wants us to believe she is contrite for her sins. No, Ma’am, that is no true remorse.'

Shedding tears in her press conference while surrounded by three lawyers, Sandra Cam said she found God in her 20 months of incarceration. Her cell was right next door to former senator Leila de Lima’s, the woman whom she helped put in jail. She said she went through the realization that she was “used as a tool for the imprisonment of De Lima.”

“Used.” Wait let’s put that in perspective. Who used her? What exactly did these users ask her to do? She gives no names and no details. That is double-speak and not a real repentance.

In November 2016, Cam said she had three new sex videos of De Lima with three different men that she will play during the Senate probe on the then senator. Her threat to De Lima was acerbic: “If she dares me, right then and there I will show it.”

Cam claimed having the videos as early as 2014 when she opposed De Lima’s confirmation hearings at the Commission on Appointments for justice secretary. But an interesting twist developed in 2016 when Rodrigo Duterte began his shaming vengeance against De Lima. The story on the alleged sex videos was bruited about by known pro-Duterte blogs and Facebook fan pages “President Rodrigo ‘Rody’ Roa Duterte Supporters,” “Diehard Duterte Supporters,” “Duterte Balita,’ and “Duterte Defenders.”

In other words, the Duterte troll battalions released the fake news bombshell. But who supplied them with the alleged sex videos? Only one person had previously possessed such material – Sandra Cam. She used the power of fake news but not the power of substance, because when you clicked on the link to these videos, all that you could see was a “13-minute and 36-second video compilation of two news reports about Sandra Cam, the president of the Whistleblowers Association of the Philippines.” It was a hasty and shabby conspiracy with the Duterte camp.

Of course there was no such video of Leila de Lima. I had seen one purported video. That was no Leila de Lima there but a character who the conspirators thought was her look-alike. But because Duterte trolls gobbled up the fake news like the speed of light, the burlesque forgery became gospel truth. Then in March 2017 was the time she made a scene at the airport. Flying to Masbate, she wanted the privilege of the airport’s VIP Lounge. The lady at the reception asked her for a government ID and this was customary. She had none.  But this was her mistake: she said she had no government-issued ID, but in three months she will have because she “will be a member of the cabinet.” My! That was the most outlandish thing to say. She was only a VIP wannabe, but was already throwing her weight around as though she was God’s gift to the Filipino people. That was an instant red flag there. Only the nefarious behave that way.

In lashing at the girl during her tirade, she tried to drop names. That was when her big mouth disclosed a detail: Bong Go. That indicated she was indeed soliciting a government appointment through Duterte’s notorious man Friday. She also told the airport staff (quoting the news report on Cam’s own clarification) “to search her name on Google so she would recognize the whistleblower.”

The problem with that is when you type “Sandra Cam” on search engines, here’s what comes out: “Sandra Cam (born June 30, 1972 in Ougrée, Liège, Belgium) is a Belgian retired freestyle swimmer who represented her country in two consecutive Summer Olympics, in Barcelona, Spain (1992) and Atlanta, United States (1996).”

Who came rapidly to her defense? Duterte. “Her behavior? Let the public judge it,” he said. “She helped me, I’ll help her. And it’s not erased just because she was shouting there. That’s her business. If she would ask me for work, I would give her the work.”

The question begs: what exactly did she help Duterte with, aside from helping in his presidential campaign as he claimed she did?

Nine months later, on December 2017, Duterte indeed appointed Cam, but not to a cabinet position. It was to one of those token positions usually given to political benefactors – member of the board of the Philippine Charity Sweepstakes Office. Was that the quid pro quo for conspiring with Duterte to bring down De Lima on false and invented charges?

When she was released from prison for non-bailable murder charges this week, there was still one favored treatment she got. Police escorted her to her residence once she got out from the PNP Custodial Center. Why the VIP treatment? So it is true that the Philippine National Police is still very much a Duterte loyalist clique?

The queen of scam Sandra Cam now wants us to believe she is contrite for her sins. No, Ma’am, that is no true remorse. You must reveal first who used you. Duterte? Vitaliano Aguirre? They are on their way to their International Criminal Court conviction, the trial of which is expected to commence this year, per sources from The Hague. You have nothing to lose if you name them.

So no, Ms. S. Cam, your asking for forgiveness cannot be granted.