[OPINION] To be Christian is to be angry 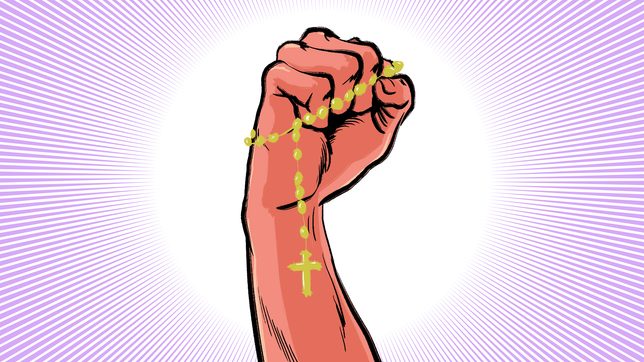 Facebook Twitter Copy URL
Copied
'In a manner that might surprise many, the command to hate evil elevates anger to a Christian duty. To hate evil includes speaking out against it.'

Compared to other emotions, anger is placed under so much surveillance. Happiness needs to be encouraged and sadness accepted.

But anger must be managed.

Too often this emotion is associated with destructive behavior, either to oneself or other people. Thus motivational speakers inspire us to control anger while therapists help us channel it in productive ways.

In church, Christians are taught to be peaceful. The ultimate example is Christ himself, who is often characterized as a meek lamb, willing to accept all the wrongdoings done to him.

But must Christians always be calm?

Despite everything that is happening in our country today – from utter disregard for the rule of law to the lies and malevolent schemes of those in power – some remain composed and even unbothered. Citing Luke 6:28, they believe that we should “bless and not curse.”

But Jesus himself, who commanded us to “love our enemies,” referred to the Pharisees as “hypocrites” (Matthew 23:23). During a confrontation, he called them “vipers.” The Filipino translation is far more uncompromising: “Mga ahas! Lahi ng mga ulupong!” (Matt 23:33).

Jesus did not think twice when he confronted the Pharisees. As religious and political leaders, they were mandated to uphold justice. But as they were more interested in protecting themselves, they failed to do so. [READ: Should Christians Protest?]

Christ’s example is a lesson to us all. He was not always the meek and unassuming figure depicted in many religious paintings.

Specifically, the command to love others does not mean Christians should tolerate what is clearly wrong. As the Apostle Paul states in his letter to the Romans, “love must be sincere; hate what is evil.”

In a manner that might surprise many, the command to hate evil elevates anger to a Christian duty. To hate evil includes speaking out against it.

And yet many Christians tend to equate love with silence.

Even if lies and injustice are already being committed right before our eyes, silence seems to be the default option for many Christians. For the sake of peace, some ministers have even exhorted their members to not comment anything political on social media. In the same spirit, pastors have invoked unity to silence criticism among their ranks.

We disagree. The doctrine of Christian love is maligned in the name of silence.

We have so much to learn from the martyr Dietrich Bonhoeffer, whom Hitler put in prison and later executed. For him, silence in the face of tyranny is “false composure” and “quite un-Christian.”

Yet the God of the Bible is not “composed.” God is angry at injustice. He laments partiality.

In Psalm 82:2, God cries out: “How long will you defend the unjust and show partiality to the wicked?” In the succeeding verses, God’s demand is unequivocal:  “Defend the weak and the fatherless; uphold the cause of the poor and the oppressed. Rescue the weak and the needy.”

There we see clearly where the heart of God lies.

When we turn to the New Testament, we encounter the same spirit. For Jesus himself, his calling was to “proclaim the good news to the poor” and set the captives free (Luke 4:18).

In a famous passage, Jesus, going into the Temple, was furious when merchants turned it into a “den of robbers.” No less than the prophet Jeremiah first used this phrase in the Old Testament to describe the state of the Temple whose worshippers took advantage of the poor. The sanctuary where the God of justice should have been exalted became the very center of injustice.

For Christ it was a travesty.

The Temple was meant to be a place where the most vulnerable were welcome. “Even the sparrow,” the psalmist proclaims, “found a nest for herself near your altar” (Psalm 84:4). That was why Jesus overturned the tables in the Temple – a sign of angry protest.

We do not deny that there are times when restraint is necessary. There is wisdom, after all, in opting for silence and measured response in certain situations.

But wisdom accompanies anger as well.

In the first place, people are angry because they know that things could be better. Out of anger, protesters stick their heads out because they believe that what is unjust needs to be corrected.

This is why protest and terrorism are two different things, no matter what this regime and its callous supporters might say.

Secondly, the wisdom of anger lies in fighting for those whose voices are deliberately dismissed.

For living through it on a daily basis, it is the ones who suffer who know what injustice means, based on which they can form new alliances and envision a better future. Sociologists call them “communities of feeling.”

Yes, anger can be disruptive, which is why it is often associated with disorder. But with the disorder that anger might bring comes the hope for a new order.

The words of theologian Beverly Wildung Harrison come to mind: “We must never lose touch with the fact that all serious moral activity, especially action for social change, takes its bearings from the rising power of human anger.

In other words, human anger is important for social transformation. And from the point of view of the Bible, God is angry at injustice.

So, why aren’t Christians angry? – Rappler.com

Jayeel Cornelio, PhD is Associate Professor and the Director of the Development Studies Program at the Ateneo de Manila University and Associate Editor of the journal Social Sciences and Missions (published by Brill).

Rico Villanueva, PhD teaches Sacred Scripture at the Loyola School of Theology at the Ateneo de Manila University. He finished his PhD in Hebrew Scriptures at the University of Bristol, United Kingdom. He is the Commissioning Editor for Langham Literature.