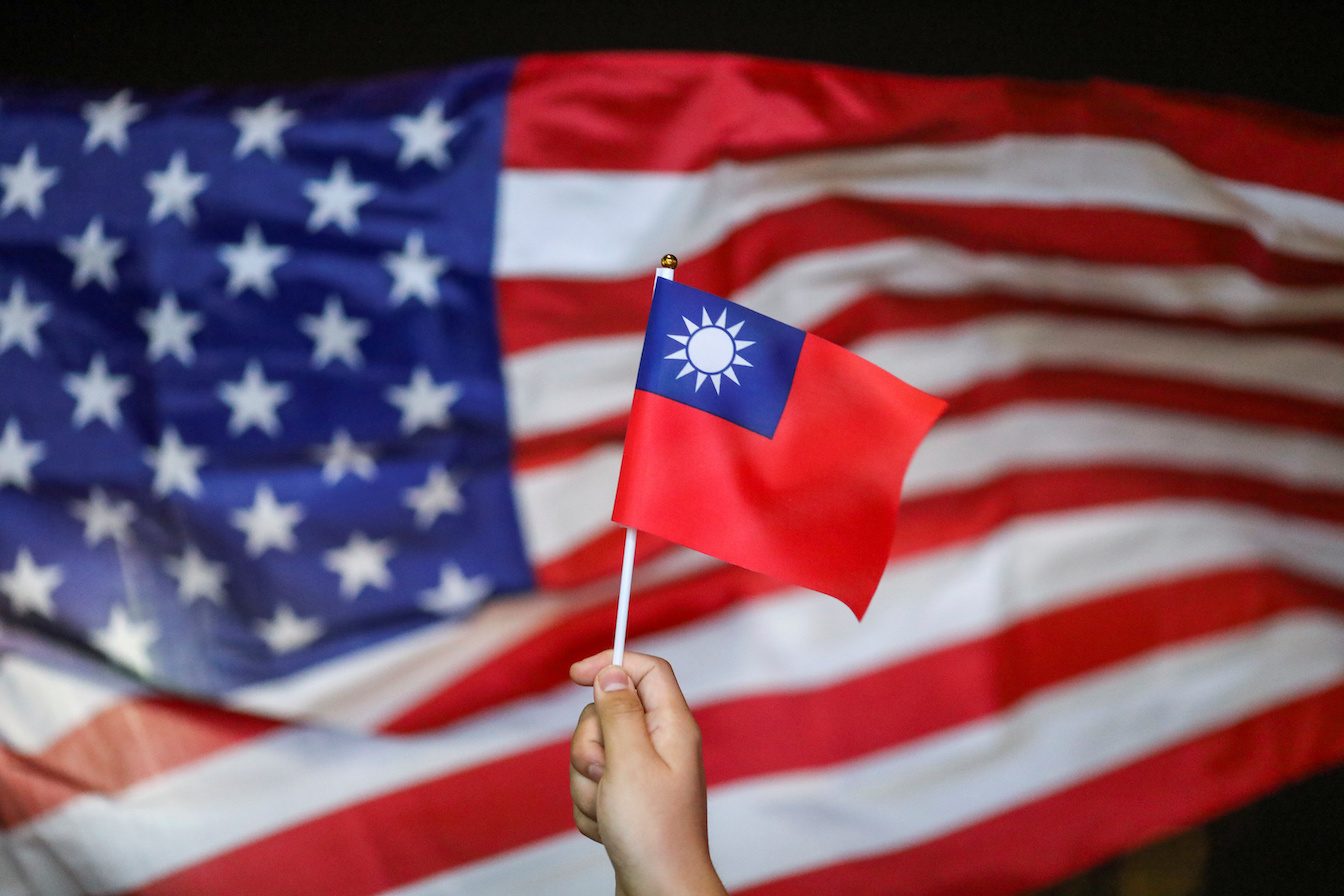 FLAG. An anti-government protester holds a Taiwan national flag as a US flag flutters in the background during a demonstration to celebrate Taiwan's National Day at Harbour City in Tsim Sha Tsui district, in Hong Kong, China October 10, 2019.

Facebook Twitter Copy URL
Copied
The Taiwan question, China’s foreign ministry spokesman says, is 'the most important and sensitive core question' in China-US relations, which is founded on the One-China principle

Tracking geopolitics in the Taiwan Strait shows a looming confrontation between the US and China over Taiwan. And the US has something to do with it.

The percolating tension between China and its island province of Taiwan is fueled by powerful and sleazy vested interest groups in the US Congress working in tandem with Taiwanese lobbyists. They provide the political incentive that bolsters Taiwan President Tsai Ing-wen’s and her ruling Democratic Progressive Party’s resolve to separate the island from Beijing. President Joe Biden is part of this game despite his recent promise to Chinese President Xi Jinping that the US upholds the One-China Policy.

In the last two years, there has been an escalation in legislative moves to elevate US-Taiwan relations. The latest is a report by the Financial Times about the US government seriously considering renaming the Taipei Economic and Cultural Representative Office (TECRO)’s to the “Taiwan Representative Office.” The news came out after Chinese President Xi Jinping and Biden held a phone conversation in which the latter said the US has no intention of changing the One-China Policy.

Earlier in March two pro-Taiwan House Republicans, Tom Tiffany and Scott Perry, introduced a brazen resolution calling on the US to resume diplomatic relations with Taiwan, negotiate a bilateral trade agreement, and support its membership in international organizations. The two House members virtually asked for the abrogation of the One-China Policy for being, according to them, “obsolete.” At the Senate in November 2020, Republican Senator Tom Cotton filed the Taiwan Assurance Act to strengthen US-Taiwan ties. The bill came on the heels of the Taiwan Fellowship Act that was introduced by Democratic Senator Ed Markey earlier in June.

The array of legislative actions authored and supported by American lawmakers is hatched in both the House and Senate Taiwan Caucuses, whose members today include 11 senators and 120 representatives. Working closely with them is Taiwan’s DPP, which runs a mission in Washington, DC. The mission’s intermediaries are led by the Formosan Association for Public Affairs and two other political action committees that lobby and raise funds to promote pro-Taiwan legislations.

Inevitably, such collaboration supports US arms sales to strengthen and modernize Taiwan’s defense systems – a program which has been sustained by billions of dollars since the 1950s. Last August, the Biden administration through its state department approved a $750-million weapons sale to Taiwan. Weapons sales underscore US commitment to the 1979 Taiwan Relations Act, which allows Washington to maintain “unofficial” relations with Taiwan and deliver arms supplies on the pretext of self-defense. The US Defense Security Cooperation Agency said the sale of the artillery system will enhance Taiwan’s “ability to meet current and future threats” while “further enhancing interoperability with the United States and other allies.”

In a similar vein, a bipartisan group of 161 members of Congress wrote the US Trade Representative in December 2019 to negotiate for a bilateral trade agreement with Taiwan. The island was being eyed as a global player in high-end chip making at a time when the US was pushing for a decoupling with Beijing in high-tech product lines. Taiwan companies were encouraged to take on bigger investments that would tie them closely to the US technology ecosystem.

Now, Biden’s act is to allay fears in Taiwan about any shift in US policy that will overtly support its reunification with China. To the contrary, Biden’s political record speaks of a consistent pro-Taiwan posture. As a senator on the Foreign Relations Committee in 1979, he voted in favor of passing the Taiwan Relations Act, which, to this day, stands at the core of US security cooperation with the island. Twenty years ago, Biden said he remained committed to preserving Taiwan’s autonomy as he was when he voted for the Taiwan Relations Act.

Interviewed by ABC News last August 20, Biden said the US has a “sacred commitment to Article 5” that if any country attacks NATO allies “we would respond.” He added it would be the “same with Taiwan.” Tsai Ing-wen’s administration profusely thanked the US president for evincing a “rock solid” commitment to Taiwan. Clearly, a tighter US-Taiwan cooperation which can potentially lead to formal diplomatic ties serves America’s geopolitical objective of increasing its leverage for Biden’s wider strategic competition, which aims to suppress China’s development and undermine its Communist Party leadership. It shows once more the chicanery and double-dealing that characterize US foreign relations.

The lead taken by Biden for a tighter US-Taiwan cooperation in conjunction with Congress’ contributive bipartisan moves emboldens Taiwan’s pro-independence movement, assured as it is of stronger defense capability with US military backing. The conditions are now being laid by the US and Taiwan to downgrade if not liquidate the One-China Policy, thus decreasing the possibility of a peaceful reunification of China and its island province of Taiwan.

Chinese State Counselor and Foreign Minister Wang Yi was right in cautioning the US not to “play with fire.” The Taiwan question, China’s foreign ministry spokesman also said, is “the most important and sensitive core question” in China-US relations, which is founded on the One-China principle. The bigger risk is eclipsing further diplomatic efforts aimed at dousing waters to a flashpoint that is increasingly heating up and which can potentially trigger a confrontation. – Rappler.com

Bobby M. Tuazon is the Director for Policy Studies of the Philippine-based independent think tank Center for People Empowerment in Governance (CenPEG). An editor and co-author of 15 books, Tuazon teaches politics and international affairs at the University of the Philippines.