Facebook Twitter Copy URL
Copied
'[Duterte] knows that that he could end his days in humiliation after being held accountable.... This is the worst thing that could happen to a narcissist.'

In recent months, the targets for extrajudicial killings are no longer just drug addicts and pushers, but those who have been “red-tagged” – activists, lawyers, human rights advocates, and labor leaders identified with the Left. President Rodrigo Duterte has declared open season on communists and groups considered as their legal fronts. He has given a shoot-to-kill order on them. Non-combatants are the usual victims of police and military operations with the same “nanlaban” (they fought back) justification.

Those who have been following the rise of Duterte up close from mayor to president are probably wondering why this is happening. Before he showed loyalty and subservience to Xi Jinping and the Chinese Communist Party, he had a previous association with the “Reds.” This is obvious not just in the pre-election interview with Rappler where he admitted being a leftist and socialist and expressed his intention to enter into coalition with the Reds.

Duterte’s rise to power can be credited to a close adviser and strategist – an ex-priest and former CPP leader captured by the military and imprisoned in Davao during Martial Law. Duterte was the prosecutor but they became friends. Many believe that he was able to perpetuate himself in power due to his connection with the Reds.

Every time the CPP celebrated its founding anniversary on December 26th, Duterte would often go up to their mountain lair, accompanied by Bong Go, bringing lechon and other goodies. When people complained about revolutionary taxation by the NPA, Duterte just told them to pay up. He also allowed the public funeral procession of slain NPA leader Leoncio Pitao, whom he regarded as a friend. Duterte was even nominated to be part of the NDF negotiating panel in peace negotiations with the government, but this was rejected by Secretary Jesse Robredo, because as a government official it would have been inappropriate to do so.

In a speech during the turnover ceremony of policemen captured by the NPA, Duterte was recorded on video as raising his fist chanting, “Mabuhay ang NPA.” He promised the NPA that when he was elected, they would have “one foot” in Malacanang (all of this can be found on YouTube). Thus, Duterte became president with the apparent support of the Reds in spite of the previous alliance between the Makabayan bloc and presidential candidate Grace Poe.

There is a video-recording of him in a Skype conversation with Joma Sison. There were even expectations that he would visit Joma in the Netherlands. He appointed in his cabinet four persons nominated by the CPP. The Makabayan bloc party-list representatives identified with the Left were part of the super-majority ruling coalition in the House of Representatives. After his inauguration, he invited leaders of Left-leaning groups to dinner in Malacanang. He ordered the release of many political leaders. Later, he welcomed the newly-released CPP leaders, Benito and Wilma Tiamzon, to Malacanang. A ceasefire with the NPA was declared.

He boasted that the communists would be willing to defend him and die for him. He was sure of their loyalty to him. He even invited them to participate in the war on drugs. He allowed members of the urban poor militant organization Kadamay (who would be later red-tagged) to take over houses which were already built but remained unoccupied. There were high hopes that under his administration a peace agreement would be reached due to his association and friendship with the Reds. This turned out to be false hopes.

The repeal of RA 1700  means that being a communist is not a crime in itself unless one has been proven to have taken up arms against the government. Red-tagging is despicable and dangerous, especially for those exercising their civil rights and expressing dissent.

If there is someone who can be red-tagged, it should have been Duterte himself. Of course, he is not a communist or a socialist. Neither was he a “Manchurian candidate,” but rather an opportunist who was able to dupe the Reds into supporting him in his quest for power. Since they are no longer useful to him, they are now considered enemies and terrorists. This is the height of hypocrisy. 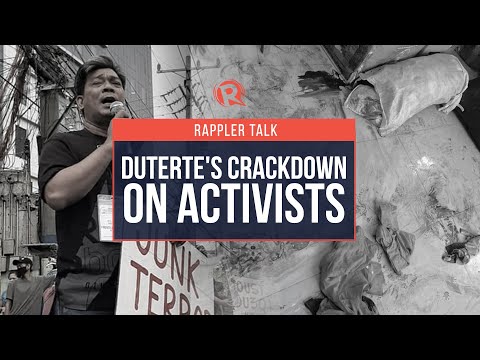 Why has he turned his back on his former “friends and comrades” and targeted them for red-tagging and elimination? His excuse for withdrawing from the peace negotiations were the ambushes carried out by NPA units that claimed the lives of civilians as collateral damage. This is not a sufficient reason to stop the peace process, which has made a lot of progress. Lately, he said that the real reason was that the CPP was demanding too much – a revolutionary coalition government. But it was he who broached this idea during the campaign to get their support.

The real reason for his change of mind can be deduced. One should bear in mind that the falling out was manifested in the non-confirmation of the four leftists in their cabinet positions. Here are some reasons that I would like to put forward:

Ironically, by becoming like his idol Ferdinand Marcos, Duterte has become the prime recruiter of the NPA. More and more young people are joining the ranks of the revolutionary movement out of anger and frustration toward his brutal and corrupt regime. With less than two years before his term expires, Duterte’s main obsession is how to stay in power and even extend it by other means. He knows that that he could end his days in humiliation after being held accountable – tried and meted life imprisonment for his crimes against the people and humanity. This is the worst thing that could happen to a narcissist.

Meanwhile, his repressive and murderous policy will simply escalate the spiral of violence. The CPP armed city partisans – the sparrow units – are being unleashed to go after abusive police, military, and civilian personnel. Tactical operations in the countryside are increasing. This is a war without victors – only victims. The peaceful resolution to the age-old armed conflict which Duterte promised and which won over the support of the Reds remains an elusive dream. This is one of Duterte’s broken promises. – Rappler.com