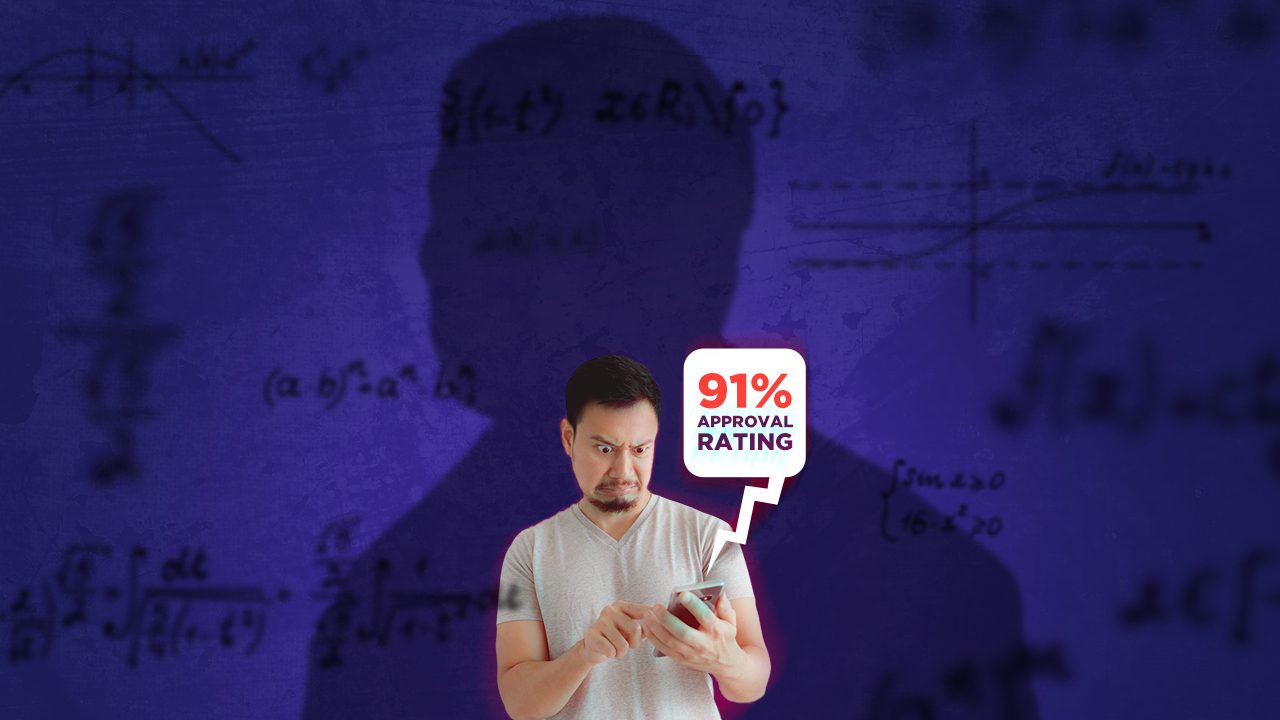 Facebook Twitter Copy URL
Copied
'When you live in a shanty, you are keenly aware how one loose comment can reach the wrong person, and get you kicked out. And that was before the drug war, not to mention the pandemic.'

We have a botched pandemic response – possibly the worst in Southeast Asia. Thousands of businesses have closed. When almost everyone knows at least one person who has lost their job, you know things are really bad. And things being what they are, a “91% approval rating” invites inquiry. That number leaves so few unhappy that reality seems to be turned on its head.

It is unfair to allege impropriety. Pulse Asia gains nothing by compromising its survey services. The Duterte administration is a blip compared to the long history of a survey outfit like Pulse Asia. But one would be forgiven to wonder what exactly Pulse Asia’s results represent. Of course, Pulse Asia and other survey companies will insist that they have strictly adhered to time-tested methods. And yet, what if the questions and the sampling methodology itself are no longer appropriate and are the source of distortion? What if getting a 91% approval rating is the sign of how off things really are? (READ: [OPINION | Newspoint] False trust)

Surveys have been a trusted barometer for decades because we simply cannot sit down and conduct extensive research on everyone. A sample, both in size and quality, will have to do. But when Trump won in 2016, pundits were aghast. Hillary Clinton was leading in almost every poll. How can the surveys be so wrong? Just like Pulse Asia, the US pollsters’ methodologies were “time-tested” through decades.

But later studies showed that was exactly their flaw. The surveys were being conducted under the presumption that society was still the same as it was in the 80s, 90s, and the early 2000s. Is today’s society really working under the same dynamics? Is it safe to ignore the effects of Facebook, Twitter, Instagram, and chat groups on survey methods?

Like everything else (governance, journalism, behavioral studies, economics) the science of polling needs to evolve and take into account the force of massive information/disinformation networks. MIT Professor of IT and Data Systems Sinan Aral calls this the “hype machine.” Prof. Aral draws from his previous work with tech giants, being an investor, and current role as Director of MIT’s Initiative on the Digital Economy. His book (PenguinRandomHouse, 2020) details how the hype machine disrupts elections and economies, as well as our responses to the current pandemic. It is a bleak account of how current methodologies continue to underestimate – and miss – the effects of social media.

We see this in Pulse Asia’s interview, which saw its head use survey figures about Filipinos’ preferred news sources (i.e. Filipinos replied that they get their news from TV, not Facebook) to minimize observations on how social media could be affecting their survey results. Anecdotally, I think the primary spreader of information (fake and real) during the past few months wasn’t even TV or Facebook – it was Viber chat groups.

There is a reason why Cambridge Analytica used our country as a test bed for its democracy-bending techniques using social media. And there is a reason why the results of those Philippine tests were successful in other countries, including the United States. It took two years, but when it finally came out, the Mueller Report describes how Russia used social media networks to systematically undermine American elections and toy with their democracy. The US felt secure with its “strong democratic institutions,” but now, as it struggles with disinformation on mask wearing and fringe groups like QAnon, we should know better. Ignore social media at your own peril.

Disinformation networks leverage basic human psychology, bolstering their ability to evade detection by pollsters. Humans layer their thoughts. (This doesn’t mean that we lie all the time; we’re just not comfortable telling strangers the whole truth). In the US, this played out in Americans telling pollsters one thing, but actually voting another way. Some Americans simply refused to respond to pollsters. Consider this: the number of Republicans who refused to respond to polls significantly outnumbered Democrats. It seemed that failing to account for “partisan nonresponse” was part of the reason why Hillary was leading in almost all pre-election polls. When you reflect on the number of times Trump tweets to his 8 million followers “fake news” and “fake polls,” you get a grasp of what is happening – and what could happen again.

To this you have to add how Filipinos as a people are even more secretive than Westerners. The disconnect between staid Western methodologies and the Filipino psyche spurred Dr Virgilio Enriquez to establish “Sikolohiyang Pilipino.” Consider the simple situation of “Kain tayo.” You enter a house (or the office pantry) where someone is eating. Pinoys will always say, “Kain tayo (Let’s eat).” But try joining them immediately and you will be in for a surprise. Research indicates that a genuine invitation (“Kain?”) needs to be repeated at least 3 times (you are expected to refuse the first and second ones).

If a simple invite to eat can be buried in multiple culturally-specific layers, can you imagine a situation where a stranger arrives in your house and asks you, “How much do you approve of Duterte?” As a final element, imagine being asked that question: (1) while waiting for “ayuda” or (2) after witnessing many EJKs in your barangay?

Localizing Aral’s research and the findings of US researchers on the 2016 US election results is a huge and expensive task. Still one hopes that our own pollsters would consider testing new methods that account for disinformation networks, the effect of these on Filipino psychology, and the twin factors of the drug war and the pandemic. (READ: EXPLAINER: Duterte’s high ratings despite poor COVID-19 response)

I grew up walking the streets of Vitas, Intramuros, and, Blumentritt. The truth is not something you pick up off those streets so easily. When you live in a shanty, you are keenly aware how one loose comment can reach the wrong person, and get you kicked out. And that was before the drug war, not to mention the pandemic.

Of course, time-tested methods should not be discarded. But when faced by the reality of the hype machine, thinking that these same methods will continue to deliver reliable facets of truth as they have in decades past will be the first step on a slow path to irrelevance.

In the spirit of fairness, I will discuss in future pieces why law must also revisit its time-tested concepts (like the “marketplace of ideas”). Because the hype machine is here. It will steamroll all disciplines. And it is not going anywhere. – Rappler.com