Tourism: What PH must do to be more competitive 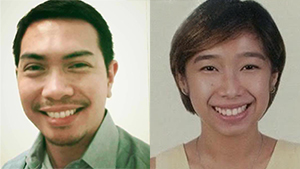 At 82nd in 2013, the country jumped eight notches, making it the Philippines’ most improved ranking since 2007.

Also, the Philippines has experienced sustained record growth in domestic and international tourism, both in terms of sheer number and increased revenue. Earlier this year, the Department of Tourism (DOT) reported a 3.25% increase from 4.68 million in 2013 to 4.83 million tourist arrivals in 2014, marking the fifth consecutive year of record international arrivals – but this was also part of an overall 18-year trend interrupted only by global political, economic and health crises.

There is indeed every reason to hope for the industry’s potential growth.

The World Travel and Tourism Council (WTTC) estimates that tourism directly contributed 4.2% of national GDP, or PHP 533 billion, in 2014. It projects that this direct contribution will grow 5.6% annually to PHP 964 billion by 2025. Together with government’s reinvigorated attitude and vision towards tourism promotion, the DOT will still likely attain record arrivals this year and the next, even as it falls short of the projections indicated in the National Tourism Development Plan.

Congratulations are definitely in order. Key reforms initiated by previous and present DOT Secretaries, and those enshrined in the Tourism Act of 2009 (Republic Act No. 9593), have helped the industry reach where it is today.

However, fully understanding our progress, and properly formulating policy, require deeper analysis into the context of the achievement.

Our understanding of our performance must consider the question of capacity. An examination of the top rung of the TTCR rankings would show that they, by and large, are occupied by developed countries that have the resources and instituitions to devote to tourism and its supporting or related industries.

There appears to be a correlation between the level of economic development and tourism rankings. Indeed, a wealthier country is able to develop infrastructure, provide social services, improve the quality of education and skills of its people, and protect natural and cultural heritage that support the tourism industry.

Figure 3.  TTCI score and GDP per capita from the 2012 WEF ASEAN Travel and Tourism Competitiveness Report 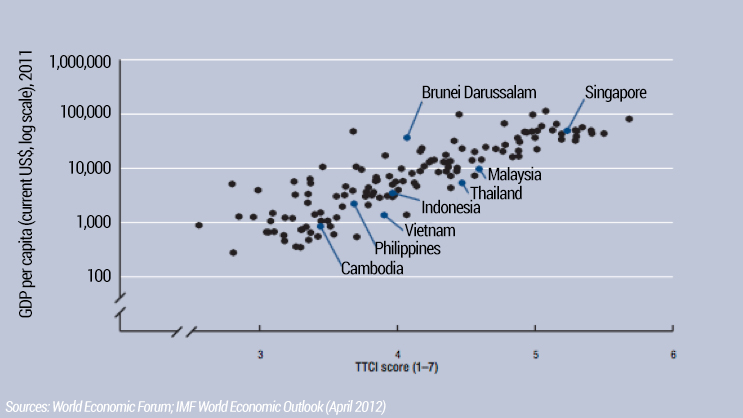 This was an observation specifcially noted in a special 2012 WEF TTCR for ASEAN, that “in 2011… the first 34 countries – and 41 of the top 50 – are advanced economies, including Singapore, the only ASEAN member to belong to that group.” In the current ranking, using World Bank income data, twelve middle income countries make it into the top fifty, with China (17) leading the pack. But all except one (Indonesia [50]) were classified by the World Bank in 2013 as upper middle income countries (with an income per capita of USD 4,126 to 12,745).

We think that it is in this context – evaluating our performance against our economic capacity or potential, and within the context of the Southeast Asian Region – that we can obtain a fairer, more nuanced assessment of our own ranking over time. 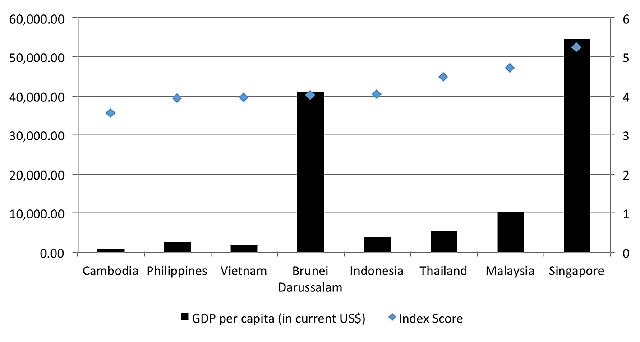 Let us disregard for now the outsized performance of Singapore and Brunei, which as micro-states, present different developmental contexts. Focusing on the other five economies – excluding the Philippines – we find that their TTCR performances correlate to their levels of economic development.

The Philippines however displays a different pattern.

In 2009, its TTCR rank and GDP per capita rank coincided, placing it between Vietnam and Indonesia. That pattern however breaks in 2011 and 2013, with Vietnam outranking the Philippines despite having a lower GDP per capita.

We posit that, during that period, the Philippines was performing below the capacity of its economy to support the growth of the tourism industry. While the situation was rectified in 2015, the Philippines was only marginally better, with a TTCR score higher than Vietnam by 0.03 points, despite having a GDP per capita higher than Vietnam’s by 38%, with Malaysia, Thailand and Indonesia leading the pack.

In sum, our tourism performance is improving, but it is not yet at a level at which our economy should allow us to perform. Indeed, to be truly competitive, we should even be performing above that level. That is where dedicated government commitment should take us.

Given its potential to generate opportunities and investment throughout the country, tourism has always been identified as one of the key priority areas of the Philippine government. But improving the state of the industry should go beyond tourism marketing and promotion, but also to allocating and devoting the proper resources to support other aspects of development that support tourism – strengthening land use planning and tourism standards regulation, establishing tourism enterprise zones, building the airports and seaports, improving public services, among many others.

In the proposed P3 trillion budget for 2016, P 2.95 billion will be allotted for the Department of Tourism (DOT), almost 30% higher than last year’s budget.

The DOT’s attached agencies – the Tourism Promotions Board (TPB) and the Tourism Infrastructure and Enterprise Zone Authority (TIEZA) among others – have modest budgets of their own.

But supporting tourism goes beyond the core tourism agencies.

An examination of the WEF criteria would show that it takes as much investments in infrastructure, health services, education, and ensuring that there is a stable business environment to drive the competitiveness of the country’s tourism industry and in turn, be a significant contributor to the economy.

*Myanmar and Laos were included in the 2015 TTCR for the first time, while Brunei was excluded.

Mark Evidente is President of TwoEco, Inc., a consulting firm specializing in tourism development.  He is both a lawyer and licensed environmental planner by profession, and a senior lecturer at the University of the Philippines’ Asian Institute of Tourism. He graduated from both Yale University and the University of the Philippines, and had worked with Sen. Dick Gordon in drafting the Tourism Act of 2009. Vanessa Pepino is a research associate at TwoEco, Inc., and is a graduate of political science from De La Salle University.