In recent weeks, some have brandished the need for a revolutionary government (RevGov for short) as part of an effort to hasten deep reforms in the country. At the heart of the argument, the claim is that there are many forces – oligarchs, dynasties, and even flawed laws – that keep the country’s development shackled. There is evidence that actually supports part of this diagnosis. In general, lack of competition, in both the economy and in politics, weakens our governance and development prospects. As vested interests persist, the political economy of reforms becomes terribly difficult. As the saying goes “two steps forward, one step back.” But as we will show in this article, RevGov is not the cure for what ails our democracy.

Was there a “Cory RevGov”?

While it may seem that revolution and revolutionary government can be easily defined, there’s no standard universally accepted classification of cases of these two yet. In fact, there’s even as many variants of revolutionary government classifications as there are scholars who examine it. However, in this article we adopt the definition and identification scheme used by Jeff Colgan of Brown University. RevGov is defined as one that transforms the existing social, political and economic relationships of the state by overthrowing or rejecting the principal existing institutions.

Proponents of RevGov, including President Rodrigo Duterte himself, have proffered as justification the supposed “Revolutionary Government” of President Cory Aquino when she assumed power immediately after the 1986 People Power Revolution. Their logic is, if she could do it, so could President Duterte.

This line of reasoning is disingenuous, and misleading at best. First, the conditions that gave rise to President Cory Aquino’s assumption of power are clearly not present now. One of the “whereas clauses” of Proclamation No. 3 issued by her on March 25, 1986 plainly expresses the basis of her extraordinary move:

“WHEREAS, the new government was installed through a direct exercise of the power of the Filipino people assisted by units of the New Armed Forces of the Philippines;”

The support of the people and the military, two elements that underpinned President Cory Aquino’s decision to abolish, albeit partially, the 1973 Constitution are without a doubt missing today. Therefore, this period of our political history cannot be used by this administration as a justifying precedent for their desire to establish a RevGov.

Second, the Cory administration did not actually brand itself as a RevGov as evidenced by Proclamation No. 3. Indeed, only its critics did. During the brief period where President Cory Aquino ruled the country with both legislative and executive power, it was under the auspices of the Freedom Constitution established in Proclamation No. 3. Hence, she did not possess limitless power as imagined by the current administration.

Furthermore, the Supreme Court has ruled in Lawyers League for a Better Philippines vs. President Corazon C. Aquino, that her government was in fact and in law a de jure government. More critically, that the community of nations had recognized the legitimacy of her government. Hence, to characterize it now as a RevGov is historically inaccurate.

It must be mentioned that less than a year after the issuance of Proclamation No. 3, the entire nation was already under the 1987 Constitution. Hence, for 30 years now, we have both enjoyed and endured life under a constitutional democracy. To be sure, reforms under the past administrations could have been much better. But make no mistake, brick by painful brick, the mess left behind by authoritarianism under Marcos was slowly being fixed. Indeed, it continues to be fixed by freedom-loving Filipinos and generations of reformists from the bureaucracy and from different political parties (such as they are).

Is RevGov really the answer?

The source of our national angst is real, notwithstanding reform victories in many areas, not the least of which include our still robustly growing economy and improving human capital investments in our young population. Yet challenges persist in many parts of the country. In Manila over half a million straphangers suffer the humiliation of riding a mass transit system that is not only mismanaged, but by now exposes riders to grave danger. About 7 million underemployed and another 3 million unemployed remain marginalized in the face of a fast-growing economy. Every year, an additional 1 million young workers join the labor force looking for decent jobs, yet our economy generates only a fraction of that. About 3 million farmers, and almost 2 million fisherfolk remain stuck in low-value-added agriculture and fisheries. And well over 90% of Philippine firms – the vast majority are small and medium scale enterprises – do not directly benefit from the benign credit environment which remains heavily biased towards much larger firms.

Persistent income and human development inequality threatens to further divide the nation, where it matters which island you are born in. Based on UNDP statistics, the level of human development in urban centers like Manila rival those of the best in ASEAN; but in places like Maguindanao and Tawi-tawi, they match the likes of Afghanistan and Zimbabwe.

Clearly, much can still be done, and the work ahead is considerable. The proponents of RevGov are essentially tapping on this national angst, potentially fueling an under-appreciation of reform gains and an over-emphasis of reform blockages. Their weakness lies in a very simplistic theory of change – that concentrating power in the hands of a few would give them the means to execute the key reforms necessary to move the country forward.

This argument is flawed in many ways. And unfortunately, the equally flawed recollection of our recent history feeds into this. Indeed, “revolutionary government” is a red herring. The real question we should be asking is whether authoritarian rule trumps incremental democratic institutional reforms.

Cory’s government hastened to transition the Philippines back to democracy and away from the authoritarian rule of President Marcos. As mentioned earlier, the drafting of a new constitution was quickly put in the works when she took over, and this was democratically ratified by the people within less than a year.

Yet, RevGovs in general are slow to transition back to democratic institutions. In fact, protracted revolutionary governments are often accompanied by high uncertainty and risks of abuse. This uncertainty and potential instability, in turn, could likely impede the country’s current economic momentum.

Historical data of 68 identified revolutionary governments in the past 50 years show stark economic development patterns before, during and after each revolutionary period. Average GDP growth is weaker during revolutionary phase—and the country only recovers once it abandons the revolutionary phase or returns to democratic rule. The average length of RevGovs in this sample is 11 years; and it is likely due to the authoritarian risks that all RevGovs inherently carry. 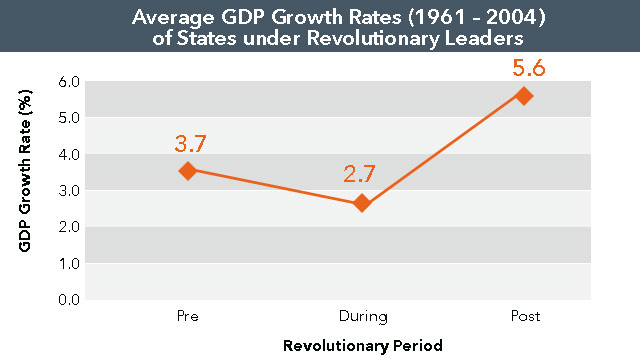 Several scholars have also previously emphasized how different variants of political upheavals, emphasizing revolution as one trigger, lead to mass violence. Nam Kyu Kim of Sung Kyun Kwan University in South Korea found empirical evidence showing that revolutionary leaders are more than 4 times as likely to initiate mass killings as non-revolutionary leaders. The violent behaviors of the revolutionary leaders also do not entirely depend on the political instability brought by the revolution but are also attributable to the leader’s traits and ideologies. Exclusionary ideologies such as those that justify efforts to persecute and eliminate certain groups play an essential role in explaining the leader’s likelihood to commit mass murder against unarmed citizens.

Hence, RevGov in the hands of people who are already predisposed to violence, or forms of populism that divide rather than unite countries, are much more likely to be destructive.

The country needs many reforms; and we will need a new narrative for moving the country forward. Ambisyon Natin 2040, the country’s long term development vision, actually puts forward a strategy underpinned by institutions and governance. Its main theory of change remains loyal to democratic institutional reforms, given our long history and worldwide empirical evidence supporting this approach.

In the final analysis, RevGov offers an old narrative that our country already tried – and we paid dearly for over 20 years of authoritarian rule under Marcos that left our economy in shambles. It took almost just as long for some of our main institutions to recover from the damage wrought by authoritarian rule. RevGov actually brings us back to the past. With a very young and vibrant population, why even contemplate going back there? – Rappler.com

Ron Mendoza is Dean and Associate Professor of Economics at the Ateneo School of Government, Michael Yusingco is a lawyer and Non-Resident Research Fellow, and Miann Banaag is a statistician with the Ateneo Policy Center. The views expressed are those of the authors and do not necessarily reflect the views and policies of the Ateneo de Manila University.