Schools in the Philippines regularly face challenges few other educational systems around the world have to deal with: frequent exposure to different kinds of hazards or disasters.

Schools are battered every year by typhoons and floods. In some areas, they have to somehow go through an academic year amid the threat of armed conflict.

It does not take much to disrupt a school year. Events large or small can have negative effects on the quality and pace of learning of school children. If a school in the path of a Signal No. 1 storm is lucky enough to escape any physical damage, it might miss one or two days of classes. The unlucky ones in congested urban areas, for that same storm, might be used as an evacuation center, missing more than one school day. Once school starts back up, students might have to wade through floodwaters around and in the school grounds for several more days.

It’s not just one typhoon a year

Since 2009 and every year since, the Department of Education (DepEd) has been asking school principals to report the number of times their school was hit by natural and human-induced disasters and hazards.

Schools are often the de facto evacuation center of barangays because they are the most accessible publicly owned disaster-ready structure in the area. In 2014 alone, 1,742 schools were assigned as evacuation centers more than once that year. You can imagine how disruptive that might be to both the teachers and the students. They may be disrupted for more days than other schools.

Data source: DepEd, BEIS. Use as an evacuation center was not reported in the data in 2013

All manner of natural disasters and hazards

There are other kinds of natural disasters and hazards that don’t happen quite as often as typhoons, and many of our schools deal with these as well. There are landslides, floods, droughts, earthquakes, and storm surges.

Close to half of all elementary schools report having been subject to between one to 3 natural disasters and hazards in 2014, and 15% report experiencing 4 or more. The level of exposure is particularly high in the Visayas where 74% experienced  one to 3 times and 17% were hit 4 or more times. 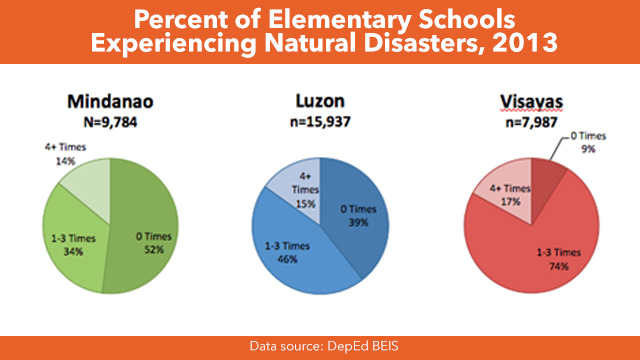 In recent years the DepEd has been able to successfully map the location of nearly all schools, allowing us to take a look at how different areas of the country are vulnerable to different kinds of hazards. Many areas of Laguna, for example, are easily flooded because they are right along Laguna Lake. 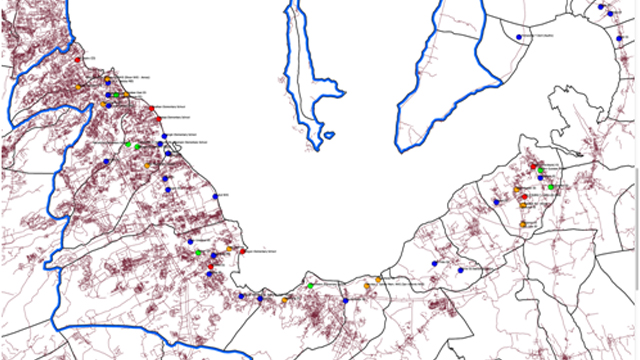 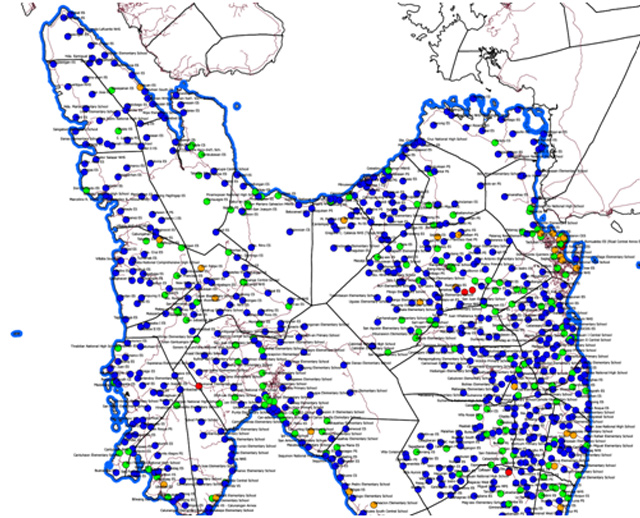 In Bulacan, the problem is flooding. Map 3 shows that some of its schools experience more than 3 floods each year. These are probably schools located in dense urban areas which are easily inundated when it rains. 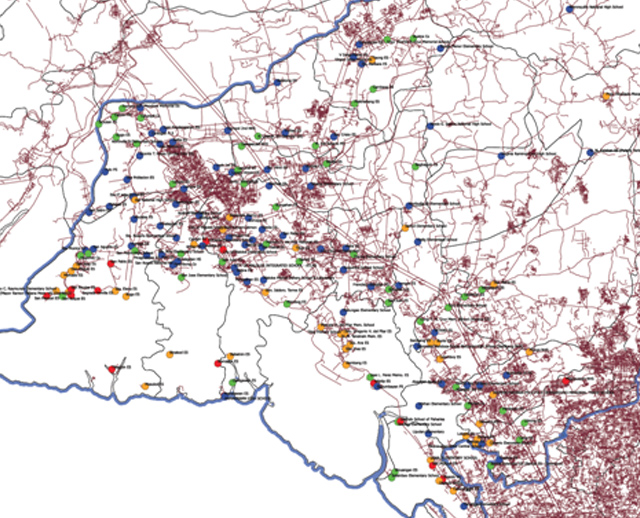 These types of information – maps of adverse events, over-time analyses of vulnerabilities of different provinces, and continued reporting of the types and frequency of disasters and hazards in schools – all contribute to a better and more responsive system within the DepEd, if it effectively applies and deploys its information for disaster risk reduction.

A critical question is whether these disasters adversely impact education outcomes. When a school year proceeds with such unpredictability and instability in the face of multiple kinds of hazards, how can our children’s learning be stabilized? It is important to study this to provide evidence-based priorities for designing mechanisms to make schools, students, and teaching processes resilient against disruptions caused by different kinds of hazards. – Rappler.com

This analysis was supported by a research grant from the UP EIDR Grant C06-013. The authors thank DepEd for providing the data, Dr. Rene Batac, Ms. Anjali Tarun and Ms. Issa Vergara for research assistance. The analyses contained and views expressed are of the authors alone and do not reflect the views of DepEd or UP.