Among the most shamefully ridiculous scriptwriters of the world is the Philippine National Police. “I thought I was reading news from Russia,” says one netizen.

Consider this storyline that the PNP concocted. On November 5, 2016, 15 policemen entered the Leyte sub-provincial jail in Baybay City on the basis of a search warrant they had obtained from a regional trial court judge in Basey, Samar.

The basis of the warrant was the testimony of one Paul Olendan who said that on the previous October 28, he was at the Baybay jail and saw inmate Raul Yap repacking meth (shabu) and fellow inmate Albuera, Leyte mayor Rolando Espinosa holding a firearm.

Police claimed they entered the city jail at 4:10 am of November 5. They said jail guards resisted them and blocked their entry. It took them 15 minutes to enter the jail cells. As they entered, they were welcomed by shots. Hence the policemen decided to retaliate with their firearms. The exchange of gunfire led to the deaths of Espinosa and Yap.

In the very profitable world of disinformation bloggers, the Commission on Human Rights is always depicted as the devil incarnate to the drug war unleashed by Rodrigo Duterte, if not red-tagged by Lorraine Badoy. Unfortunately for the paid disinformation masters of the past regime, it was the National Bureau of Investigation that gathered testimonial evidence and made a forensic recreation of the crime scene. What did the NBI establish that demolished the lousy PNP script that couldn’t even make it to the Famas Awards? First it ascertained that Paul Olendan perjured himself. He was nowhere near the Baybay jail on October 28 but was in Tacloban City 130 kilometers away. His assistant principal at the Leyte National High School attested that Olendan reported for work that day. He even had his biometrics taken. Jail guards and inmates testified that Olendan was never seen at the jail on that day.

Olendan should have been removed from the service. Imagine a perjuring public school teacher that the young can emulate in the wrong ways. The same thing can be said of the judge who signed the warrant on the basis of Olendan’s perjury. It is really true that we have hoodlums in robes.

Police claimed they entered the jail at 4:10 am. NBI secured CCTV footage from the nearby Department of Public Works and Highways showing the police arrived at 3:05. PNP scriptwriters knew they would be questioned why they would conduct a search at 3 am. Stumbling over their lies, police testified in the Senate that Scene of the Crime Operatives (SOCO) arrived at 3:49 am. But the NBI said the police operation was already over by that time.

The PNP said there was “nanlaban,” the standard Duterte-era big lie. NBI forensics found otherwise. In fact, jail guards were ordered by the policemen to face the wall while the inmates were transferred to another cell. Espinosa was heard to have said: “Good morning. Don’t plant anything against me, I don’t have any,” referencing the standard Duterte-era practice of planting evidence.

Yap was killed first, then Espinosa. As they lay dead, a policeman wearing gloves entered the scene of their own crime. He was holding a gun. After he had gone out of the cell, he was no longer holding the gun. The fake plot was predictable: Espinosa “fired back,” the reason why a gun was “found” near his body – without the policeman’s fingerprints.

But the NBI finding showed there was no exchange trajectory of gunshots. “It was a premeditated killing with superiority of force and defenseless, helpless victims.” It was a rubout, not a shootout. It was extrajudicial killing by the Philippine National Police with the predictable script forced down our throats. Even the Senate agreed.

In 2017, French television France 24 reported (sorry trolls, it’s not Rappler): “Philippine policemen accused of killing a town mayor when he was in jail on drugs charges are back on duty, an official said Thursday, in a case cited as a sign of growing impunity under President Rodrigo Duterte.” It was the “function of our justice system,” said then-PNP chief Bato dela Rosa. Take note, International Criminal Court.

Impunity – the Filipino people are taking note. That is why when Percy Lapid was assassinated in typical riding-in-tandem EJK fashion, the widespread perception was that it would be a case to remain unsolved. When Joel Escorial “confessed” in an absurd press conference where the press was not even allowed to ask questions, the immediate perception was he was just a fall guy. His features certainly did not match a still photo taken of the gunman captured from a closed circuit camera. 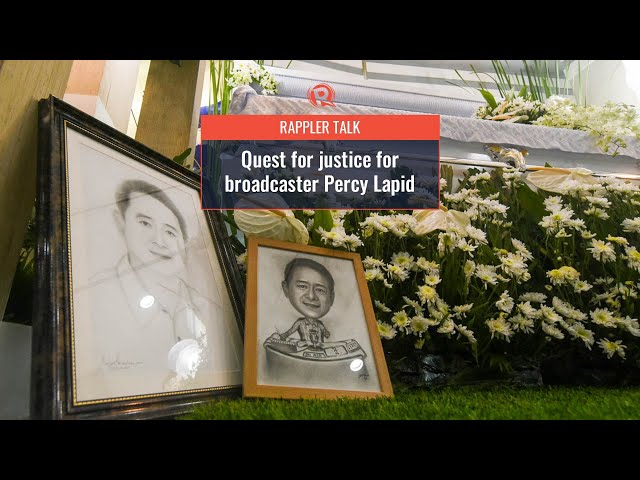 The PNP tried its very best to submit a script that they had thought was believable. Escorial was imaged as a man whose life will be in danger because of his confession – he was made to wear what appeared to be a Kevlar helmet. Sooner or later he will probably be eliminated too, and the police will then cry “nanlaban.”

Thus far, some of the dominoes have fallen. The gun Escorial used to shoot Lapid was a duplicate, after its serial number was traced to the legal owner who showed them the original firearm bearing the same serial number.

On the day of his confession, a “middleman” who he claims was an inmate at the Bilibid penitentiary turned out to have died – yes, on the same day. And the police script? “Undetermined cause of death” was written on the death certificate. But first they fumbled that the middleman died on October 13. Too obvious and predictable. To revive the waning plot, the police then announced there was another “middleman” who was also an inmate.

Among public perceptions expressed on social media: “The people in charge have picked up a rock to drop on their own feet – great going!”

Who had access to Bilibid and made it a factory of faked testimonies from inmates that Leila de Lima was a drug dealer? Go predict the predictable plot. – Rappler.com