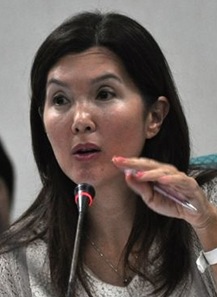 Despite the Senate hearing we conducted last April 1, 2013, and other consultations we had wherein studies were shown by sports psychologists and experts illustrating how the residency period may interfere with an athlete’s training and state of mind, they still chose to uphold their ruling.

It is no secret that this rule came about as a result of the "pirating" of basketball players who were recruited and sponsored as early as high school, only to move to a different university for college. Although there are certainly issues here that need to be addressed, the vast majority of athletes are not even similarly situated, and yet they will pay the price of being benched for 2 years.

Take for example the Bartolome sisters who are both swimmers. Their father Vic described how he, as a government employee, paid for the swim training of his daughters since they were five years old. Although they later swam for UST high school, both girls wanted to go to UP for college. But now, because of the UAAP rule, the younger Bartolome, Mikee – an MVP juniors swimmer – will have to sit out 2 years.

If you think about it, for an athlete taking a regular four-year college course, that’s exactly half of their college sports career spent being forced to sit out.

Close to tears, Vic Bartolome said that without being in the UAAP line-up, Mikee risks losing her competitive edge and may very likely lose her shot at winning the 18 and under title.

I still believe that this ruling denies athletes of their rights to develop their full potential and is an unreasonable limitation on an athlete’s freedom of choice as well as academic freedom to choose which college to enter into.

A student-athlete is a student first, then an athlete second. They must be given the choice of which school they think will maximize their skills and prepare them best for their future. We cannot, and should not, take it away from them.

We are informed that there will be implementing rules coming out but until we see it, all we know is that this rule stands. And until then, I will continue to fight this unjust and cruel rule and will not hesitate to take this issue to court.

For those who want their voices heard, sign the online petition to revoke the UAAP. - Rappler.com