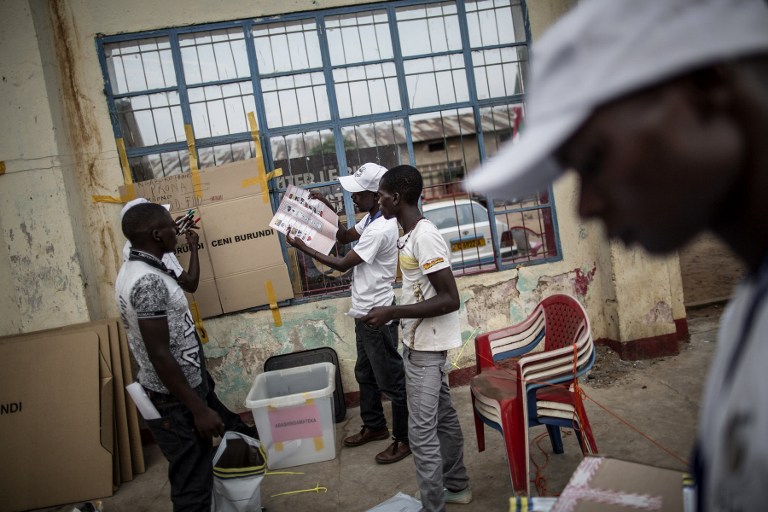 The United States warned that Bujumbura’s dismissal of calls to delay the poll “risks its legitimacy” and risked “unraveling the fragile progress” made by the peace deal that ended more than a dozen years of civil war and ethnic massacres in 2006.

At least two people – a policeman and a civilian – were killed in a string of explosions and gunfire overnight.

Blasts and shootings were heard as polls opened shortly after dawn in the capital Bujumbura, the epicenter of three months of anti-government protests.

Opposition and civil society groups have denounced Nkurunziza’s candidacy as unconstitutional, with many boycotting the polls.

Centers visited by Agence France-Presse reporters in Bujumbura appeared quiet with few queues, although voting was busier in pro-Nkurunziza areas.

Nkurunziza himself turned up on a bicycle to vote in his home village of Buye – where turnout was high with long lines of voters.

United Nations Secretary General Ban Ki-moon urged calm, calling on all sides to “refrain from any acts of violence that could compromise the stability of Burundi and the region.”

Critics fear a win by the incumbent will be a hollow victory, leaving him ruling over a deeply divided nation.

With the election denounced by the opposition as a sham, the 51-year-old president – a former rebel, born-again Christian and football fanatic – is facing no serious competition.

Although eight candidates are on the ballot paper, most have already withdrawn from the race and those remaining are not seen as having a chance against the incumbent.

In one polling station, the Saint-Etienne school in the center of the capital, voters were seen scrubbing off indelible ink from their fingers to avoid reprisals from opposition supporters boycotting the ballot.

“I do not want to return home with ink on the finger,” said one voter.

The International Crisis Group think-tank has warned that the situation has all the ingredients to kick-start a renewed civil war.

“Despite a facade of pluralism, this is an election with only one candidate, where Burundians already know the outcome,” said the ICG’s Thierry Vircoulon.

Former colonial ruler and key donor Belgium said the polls “do not meet the minimal requirements of inclusiveness and transparency,” and repeated warnings it would “review its cooperation” with Bujumbura.

Independent media has been shut down and many opponents have fled – joining an exodus of over 150,000 ordinary Burundians who fear their country may again be engulfed by widespread violence.

Doctors Without Borders (MSF) said Monday around 1,000 people were fleeing each day into Tanzania, crossing the border “through the forest… many travelling in the dark on foot and without belongings.”

‘Sliding into an abyss’

In mid-May, rebel generals attempted to overthrow Nkurunziza in a coup. After that failed they launched a rebellion in the north of the country.

Last-ditch crisis talks mediated by Uganda broke down on Sunday.

“They have refused to save Burundi from sliding into an abyss,” said opposition leader Jean Minani, who like almost all others, has boycotted Tuesday’s poll.

Key opposition leader Agathon Rwasa has not formally withdrawn, but said the election cannot be free or fair and did not campaign.

Poor and landlocked, Burundi is situated in the heart of central Africa’s troubled Great Lakes region.

Analysts say renewed conflict in the country could reignite ethnic Hutu-Tutsi violence and bring another humanitarian disaster on the region.

The conflict also risks drawing in neighboring states – much like in the war-torn east of Democratic Republic of Congo.

Nkurunziza’s CNDD-FDD party scored a widely-expected landslide win in parliamentary polls on May 29 that were boycotted by the opposition.

UN electoral observers – some of the few international monitors in Tuesday’s poll – said the last round of voting took place in a “climate of widespread fear and intimidation.”

The results of parliamentary polls took a week to be announced.