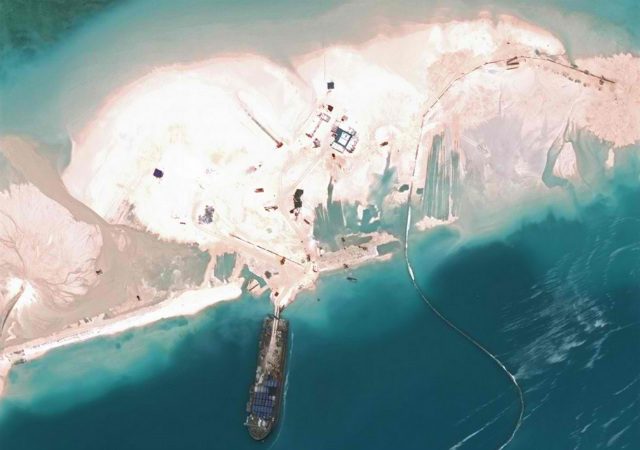 Facebook Twitter Copy URL
Copied
(UPDATED) Ahead of the gathering hosted by the ASEAN in Malaysia, Chinese Foreign Minister Wang Yi signaled no compromise over its island-building activities

KUALA LUMPUR, Malaysia (UPDATED) – China was on a diplomatic collision course with some of its neighbors and the United States over its controversial island-building, as regional security talks opened Tuesday, August 4, in Kuala Lumpur.

Beijing is expanding tiny reefs in the flashpoint South China Sea into islands and topping some with military posts to reinforce its claims over the strategic waters, fanning fears of a conflict.

Ahead of the gathering hosted by the 10-member Association of Southeast Asian Nations (ASEAN) that kicked off on Tuesday in Malaysia, Chinese Foreign Minister Wang Yi signaled no compromise.

During a stop in Singapore on Monday, August 3, Wang insisted that the issue should not be raised at the talks, and that China would press ahead with its controversial land-reclamation works.

“China has never believed that multilateral fora are the appropriate place for discussing specific bilateral disputes,” Wang told reporters before traveling to Malaysia.

Attempts to bring the issue up are “counter-productive” and “heighten confrontation”, he warned.

However US and Southeast Asian officials say the hot-button issue will be raised in Malaysia this week.

In his opening remarks Tuesday, Malaysian Foreign Minister Anifah Aman took a swipe at Beijing’s refusal to address the thorny issue with its neighbors at the talks.

“ASEAN can and should play a vital part in effecting an amicable settlement” on the South China Sea, he told fellow foreign ministers.

“Above all we must be seen to address this issue peacefully and cooperatively. We have made a positive start but we need to do more.”

Vietnam, the Philippines, Malaysia and Brunei – all ASEAN members – also have various claims to the South China Sea, as does Taiwan.

Beijing has long insisted that disputes must be handled on a bilateral basis with rival claimants, rather than with a united bloc.

Adding to the tensions, a Washington-based think tank said this week Beijing could be preparing to build a second airstrip on an artificial island.

China is already building a 3,000-meter (10,000-foot) runway on Fiery Cross reef, which could ultimately be used for combat operations, according to the Center for Strategic and International Studies (CSIS).

Wang rejected calls by some rival claimants and the United States to suspend the land reclamation.

“The freeze proposal may seem even-handed on the surface but it is actually unrealistic and will not work in practice,” he said.

Foreign Secretary Albert del Rosario of the Philippines, which has been one of the most vocal critics of China’s actions at sea, said on the meeting’s sidelines that Manila was checking into the reports of a new runway.

Only Southeast Asian foreign ministers met on Tuesday, but the talks will expand over the following two days into the ASEAN Regional Forum (ARF), attended by US Secretary of State John Kerry, China’s Wang, and envoys from the wider region including Japan, the Koreas, Russia and elsewhere.

Kerry is to meet Wang on Wednesday morning on the sidelines.

He had been due to meet his Turkish counterpart Mevlut Cavusoglu on Tuesday evening, as both sides grapple with the threat posed by the Islamic State (ISIS), but the one-on-one has since been dropped from a schedule provided to journalists. – Jerome Taylor, AFP / Rappler.com