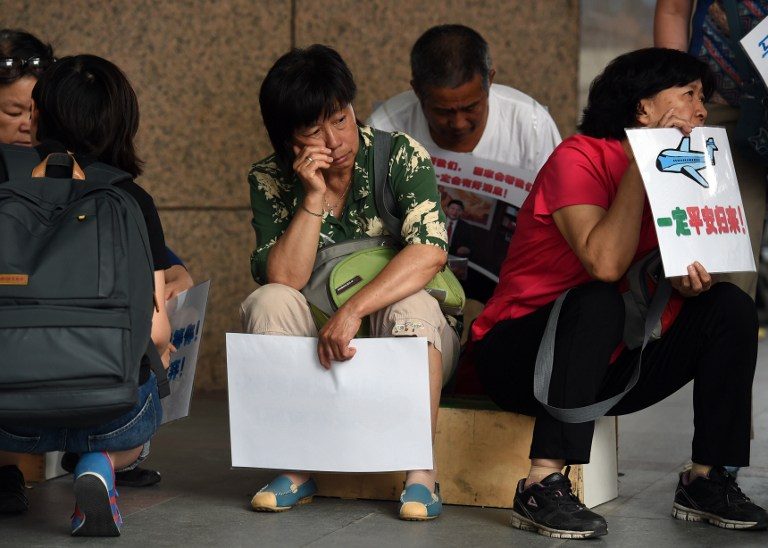 Most of the passengers aboard the flight were Chinese, and around a dozen gathered outside the Beijing offices of Malaysia Airlines, with emotions running high.

“I don’t believe this latest information about the plane, they have been lying to us from the beginning,” said Zhang Yongli, whose daughter was on the plane.

“I know my daughter is out there, but they won’t tell us the truth,” he added, waving Chinese and Communist Party flags.

Bao Lanfang, whose grandson was on board, told reporters, “Everyone has been lying to us”, before collapsing on the floor and crying.

“I will do anything to see him again,” the 63-year-old added through her tears. “Just tell me what I need to do, I’ll do it”.

The flight, with 239 people on board, vanished en route from Kuala Lumpur to Beijing in March last year.

No evidence had been found until the debris, part of a wing known as a flaperon, washed up on the French territory of Reunion, and Malaysian Prime Minister Najib Razak said early Thursday it was from the jet.

French officials who analyzed the wreckage said only that there was a “very high probability” it came from MH370.

“The French examiners were instead very cautious. They haven’t drawn a conclusion,” noted Wen Bai, whose 34-year-old son was on board.

“How can you jump to the conclusion that the plane has crashed simply on the base of a single piece of debris? It could be pulled from other aircraft,” he told Agence France-Presse.

Many Chinese relatives of MH370 passengers have consistently expressed beliefs that their loved ones are alive, perhaps being held at an unknown location, despite the mounting evidence of a fatal crash.

Several gathering on Thursday held signs with a picture of an airplane, reading: “It will surely return safely”.

On a social media group other relatives expressed similar sentiments, saying: “Don’t believe them! They must have switched the debris! We do believe all our relatives will come back safe and sound!”

Elsewhere Chinese people took to social media sites to express skepticism about Malaysia, whose reputation has taken a knock in China for its handling of the incident.

“Malaysia wanted to avoid the large amount of payment for the relatives so it announced that it found the debris in Reunion and that the airplane crashed accidentally. We don’t believe Malaysia,” one comment on the Twitter-like Sina Weibo read. – Rappler.com