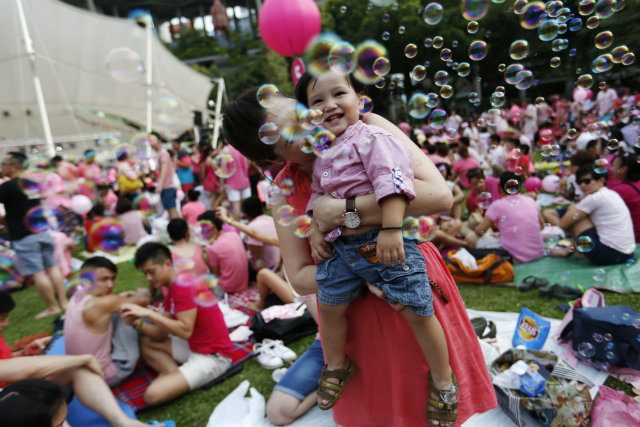 SINGAPORE – “I want my sons who are both gay to be happy and to live fulfilled lives,” says one mother. A son continues, “I want my mom to accept me as a transgender.” A guy smiles and says, “I want my cousin to feel this is a different place than the one that she left.”

The video testimonials are an annual tearjerker for many Singaporeans. Every year in June, thousands gather in Hong Lim Park, the only place in this city-state where free speech is allowed. Yet participants do not protest. There are no rainbow flags or psychedelic costumes. Instead, families and friends turn up, watch performances and speeches, and form a giant pink dot of lights.

Pink Dot SG is an LGBT movement in Singapore. While activists in other countries hold the pride march, the Pink Dot event is more subdued. The approach is intentional in a country where sex between men is a crime, and the prime minister believes society is “still conservative” for gay marriage.

As Singapore celebrates its rise to first-world status on its 50th anniversary, the gay community knows it is not part of the official festivities.

“If you look at modern societies, the advanced economies, this is not an issue. Recently, same-sex marriage became legal across America. We’re there in terms of GDP, skyscrapers but we’re not quite there yet in terms of the LGBT conversation,” Pink Dot SG spokesperson Deryne Sim told Rappler.

Still, judging by the growing numbers in the Pink Dot events and offshoot movements abroad, Singapore is slowly building its own successful model of gay activism.

Pink Dot SG began in 2009 partly due to a change in park rules. Whereas permits were previously required to hold events at the Speakers’ Corner in Hong Lim, registration became the only prerequisite. It provided an opening for Singaporeans accustomed to a government that uses British colonial-era laws to silence critics, and sues bloggers for defamation. Since then, Pink Dot has had 7 events. The latest drew 28,000 participants, making it the largest free speech event in Singapore’s history.

Pink Dot’s events gather straight and gay individuals, Singaporeans and foreigners, parents and grandparents, and even babies and pink poodles. The group calls itself a movement open to anyone who supports “the freedom to love.”

“I was very impressed by what they did. I was in the closet for a very long time. Pink Dot presented a very credible and real front for the LGBT community in Singapore. I watched their videos and I saw that hey, it’s not an abomination to be LGBT.”

The movement adapted to Singapore’s social context. A multiracial society composed of a majority Chinese, and Malay and Indian population, Singapore has religions ranging from Buddhism, Islam, Taoism, Christianity, Hinduism and more.

“If everyone came out in leather, net stockings, we will scare and alienate a lot of people. It will hurt our message,” said Sim. “We don’t talk in abstract terms: human rights or constitutionality. It’s very unappealing. We talk in terms of human stories. ‘This is your gay child. What are you going to do? Your child is cross-dressing. How do you feel about it?’” Social media and an edited Ellen

Getting the message out became easier with social media. Before every event, Pink Dot uploads moving videos on Youtube to invite people to the gathering. Featuring celebrities and famous personalities, the videos become a starting point for conversation, with some LGBT members using these to come out to their families.

A lawyer, Sim said Singapore’s laws bar the mainstream media from “promoting the homosexual lifestyle.” Only negative portrayals are then shown on free TV.

“We get a lot of censorship. For example, Ellen [DeGeneres]. Everyone knows Ellen is married to Portia [de Rossi]. But if you watch it on TV, you will think they are friends or sisters because it’s cut in such a way that they are never mentioned together romantically. Conversely, you have Brokeback Mountain where you have very violent, graphic scenes, that’s allowed.”

The deferential media covers Pink Dot events but calls them “picnics” instead of a movement. Yet with 8 out of 10 Singaporeans able to access the Internet, the group is able to bypass traditional media.

The LGBT in Singapore suffer from bullying in schools, and lack anti-discrimination legal protection at work. Gay couples cannot apply for public housing.

Still, the biggest hurdle remains the ban on sex between consenting men, known locally as 377A to refer to the section of the penal code.

Alex Au, an outspoken gay blogger and political commentator, said the law is outdated even by Singapore standards.

“Singapore is this very funny place where if you look at our legislation, we are nearly on par with Saudi Arabia where the homosexual act is illegal and punishable by jail. It’s not difficult to be out here except for some crazy religious extremists shouting at the top of their voices. Our laws don’t reflect the relatively accepting nature of Singapore society,” he told Rappler.

Sim said Pink Dot supports the repeal of the law but through other means.

“We have a conversation with people. It’s less about the outright campaigning or top-down approach. We’re not there, and that’s not our style. If you lobby for the laws, it’s not going to work. We have to change hearts and minds. When people start thinking, ‘What they are doing in their bedroom is none of our business,’ then 377A will go away.”

Despite the opposition Pink Dot gets from conservative Muslim and Christian groups, it inspired similar movements in conservative societies like Hong Kong, Taiwan, and Okinawa.

“This is very interesting to see how this is a very different Singapore that is actually able to export a body of activism, something we would never have expected in the earlier phase of Singapore,” he said.

Tan said that in the 1990s, organizations tended to work with the state to form what the government preferred to call “civic society” instead of civil society. Now, that space is changing.

Singapore’s leadership is still not receptive to the cause. Prime Minister Lee Hsien Loong identified the LGBT as a “divisive issue” that might challenge “national identity” in the global city’s next 50 years.

Au called the statement flawed. “It’s better to reconceptualize national identity away from homogeneity to diversity. Diversity does not mean everybody is nice to each other but a robust, resilient national identity must be one in which despite strong differences of opinion, we are still one.”

“The freedom to love, how can you argue against it?” – Rappler.com

#SG50: Q and A: ‘Singapore to be capital of Asian century’