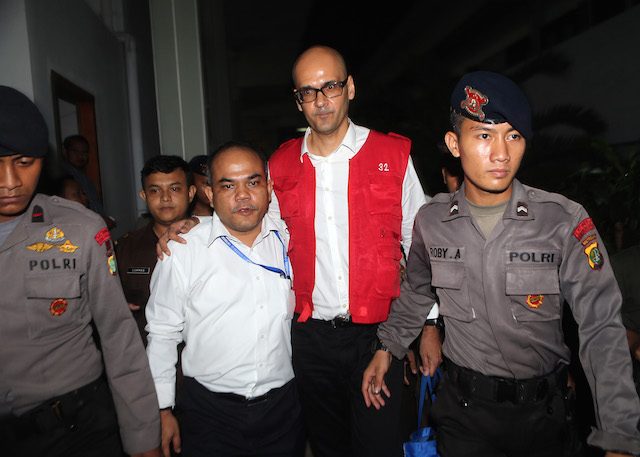 Facebook Twitter Copy URL
Copied
The Jakarta High Court ruling in the men's favor and the speed of their release still came as a surprise after months of frustrated attempts to challenge their convictions.

JAKARTA, Indonesia — A Canadian and an Indonesian jailed for sexual abuse at an elite Jakarta international school walked free from prison Friday to an emotional reception from supporters after unexpectedly being cleared.

School administrator Neil Bantleman, who also holds British nationality, and Indonesian teaching assistant Ferdinand Tjiong were released from jail in the capital after winning their appeals due to a lack of evidence against them.

Bantleman hugged and kissed his wife Tracy, who could not stop crying, as he walked out of the prison gates, and told a scrum of supporters and journalists: “Everybody, thank you for your support.”

The pair were jailed for 10 years each in April and ordered to pay a hefty fine after being found guilty of abusing three young children at the Jakarta Intercultural School (JIS), which has been popular with expatriates and wealthy Indonesians for decades.

They maintained their innocence and received backing from the school and parents, with supporters accusing police of a botched investigation and alleging that the men’s trials were unfair.

Hopes that the men might be released rose this week after a $125-million sex abuse lawsuit against the school was dismissed, a suit that supporters believed was the main reason the pair were being pursued.

But the Jakarta High Court ruling in the men’s favor — which was handed down earlier this week but only passed to their legal team late Thursday — and the speed of their release still came as a surprise after months of frustrated attempts to challenge their convictions.

Bantleman said he had no idea that he would be released until early Friday.

As the men walked free, a small group of sobbing supporters yelled their names.

Tjiong — who was carrying his young daughter — said: “I thank God because the truth still exists in Indonesia. I hope this will never happen again.”

They embraced their supporters one by one before being ushered into cars and driven away.

Their lawyer, Hotman Paris Hutapea, told reporters they were cleared as the High Court ruled there was “no proof”, adding that the allegations against them were “baseless”.

As well as the decision by a Jakarta court to throw out the multi-million-dollar civil suit, the men’s case received a boost last month when the Singapore High Court ruled in favor of the pair in a defamation case against the mother of one of the alleged victims.

JIS is backed by the American embassy — which helped found the school — and officials from the United States have repeatedly expressed concern about the case, saying it raised questions about the rule of law in Indonesia.

US ambassador to Jakarta Robert Blake welcomed the men’s acquittal.

“The rule of law and an independent judiciary are vital components of any democratic system, and we appreciate the fairness and prudence shown by Jakarta’s appeals court,” he said in a statement.

The scandal began last year with claims that cleaners committed abuse at the school — previously known as the Jakarta International School — before allegations were leveled at Bantleman and Tjiong.

Five cleaners were jailed in December over claims of sexual abuse and remain in prison. Their lawyers claim they are innocent, and several who originally admitted to abuse recanted their confessions, alleging that they were beaten by police.

The expatriate community in Jakarta was initially shocked at the claims of abuse, but horror quickly transformed into concern at what supporters say was an unfair attempt to target Bantleman and Tjiong by Indonesia’s notoriously corrupt police and judicial system.

Despite the concerns about the case, the prosecution insisted that the testimony of the alleged victims was the truth. —Rappler.com