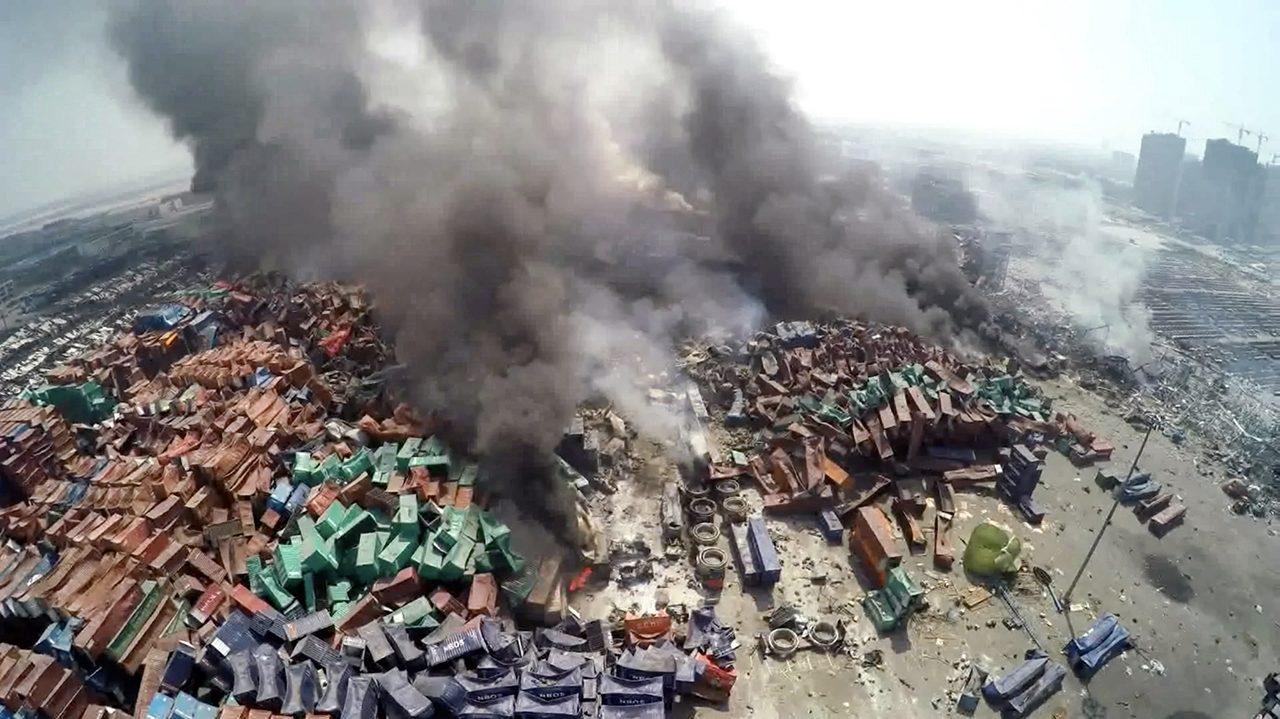 Facebook Twitter Copy URL
Copied
According to rescue headquarters, 722 people have been hospitalized, 58 of whom are in a critical or serious condition

TIANJIN, China (3RD UPDATE) – The death toll from the giant chemical explosions in the Chinese port of Tianjin has reached 104, the Xinhua news agency said on Saturday, August 15, as area residents were evacuated  over fears of cyanide contamination.

A days-long fire intensified at the hazardous goods storage facility with a series of new explosions sending thick black smoke into the air, the official news agency said.

According to rescue headquarters, 722 people have been hospitalized, 58 of whom are in a critical or serious condition.

Earlier on Saturday, 3 days after the gigantic explosions sent a huge fireball into the sky and left a vast swathe of destruction, President Xi Jinping issued a statement warning authorities to learn the “extremely profound” safety lessons highlighted by the tragedy.

The decision to relocate anyone within 3 kilometers of the site came despite official assurances that the disaster had not released dangerous levels of toxic substances into the environment.

However, Xinhua said area residents had been evacuated “in fear of chemical pollutants in the air.”

The Beijing News said armed police were carrying out the evacuation after sodium cyanide was found at the site.

At a barrier on the edge of the evacuation zone, masks were distributed to emergency personnel and police turned back anyone else, as at least 20 fire engines streamed in.

The area itself was already largely deserted, many of the buildings within it ruined, and an acrid smell hung in the air.

One couple carrying suitcases confirmed from behind their masks only that they lived within it, before leaving.

Officials said earlier that specialists from sodium cyanide producers were being sent in to the devastated industrial area where the blasts occurred.

Reports have said there could have been as much as 700 tons of the substance — exposure to which can be fatal — at the site.

Authorities have struggled to identify the substances present at the scene, sparking fears and scepticism among residents of Tianjin, which has a population of 15 million.

At a news conference, Tianjin work safety official Gao Huaiyou listed a host of possible substances that may have been at the site at the time of the explosions.

Personnel from sodium cyanide producers were called in “because they are experts on the chemical’s nature and the ways to deal with it,” he added.

A sewage pipe where the chemical had reportedly been detected had been sealed off, he said.

Authorities had repeatedly said beforehand that air quality in the city generally met requirements, although levels of some pollutants exceeded regulations.

Questions have also been raised over whether firefighters responding to an initial blaze at the warehouse could have contributed to the detonations by spraying water over substances that react explosively to it.

One senior official insisted that firefighters had followed the proper procedures.

“We knew there was calcium carbide, but we don’t know whether the calcium carbide exploded and caught fire,” Lei Jinde, the head of the firefighting department at Tianjin’s public security bureau, said in an interview published by Xinhua.

Lei said that the facility was also listed as holding ammonium nitrate and potassium nitrate.

China has a dismal industrial safety record, and authorities have released only limited information about the accident, a criticism often levelled at Chinese officials in the aftermath of disasters.

Furious victims’ relatives railed against officials outside a news conference Saturday over the lack of transparency and information.

“Nobody has told us anything, we’re in the dark, there is no news at all,” screamed one middle-aged woman, as she was dragged away by security personnel.

The People’s Daily said earlier that the facility’s construction “clearly violated” safety rules, in particular those that require warehouses stocking dangerous materials to be at least one kilometer from surrounding public buildings and main roads.

“I would rather not believe they are true when I see a series of rumours, but the cruel reality has proved their authenticity,” Chinese director Yang Li, the winner of a Silver Bear at the 2013 Berlin Film Festival, wrote in a post on microblogging platform Sina Weibo.

“Why did they (the government) cover it up?”

More than 360 social media accounts have been shut down or suspended for “spreading rumours” about the blasts, Xinhua reported, citing the Cyberspace Administration of China (CAC).

Popular verified bloggers also made comments about the blasts described as “irresponsible”, such as comparing them to the atomic bombs dropped on Japan during World War II, CAC added.

Chinese authorities and Internet companies operate a vast censorship system and while there has been extensive discussion of the explosions, it has been confined within set boundaries.

In a written statement reported by Xinhua on Saturday, Xi said the blasts and a recent string of accidents had “exposed severe problems in the work safety sector”.