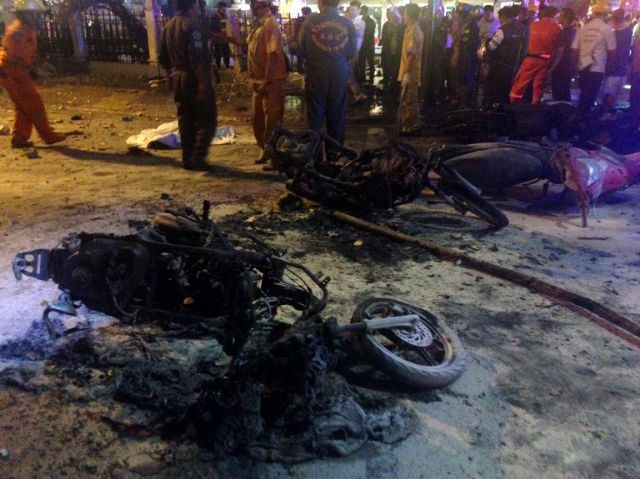 Facebook Twitter Copy URL
Copied
(5th UPDATE) The blast occurs when the streetside Erawan Shrine, close to some of Bangkok's most popular upscale shopping malls, is packed with worshippers and tourists

BANGKOK, Thailand (5th UPDATE) – A bomb exploded Monday, August 17, outside a religious shrine in a bustling hub of the Thai capital, killing at least 19 people and injuring more than 120 others in an attack authorities said targeted foreigners.

The blast occurred about 6:30 pm when the streetside Erawan Shrine close to some of Bangkok’s most popular upscale shopping malls was packed with worshippers and tourists.

“I heard a very loud bang, it made the whole building shake so I ran outside to see what had happened,” Panupan Chansing, 20, a hotel worker at the nearby Grand Hyatt Erawan, told Agence France-Presse. 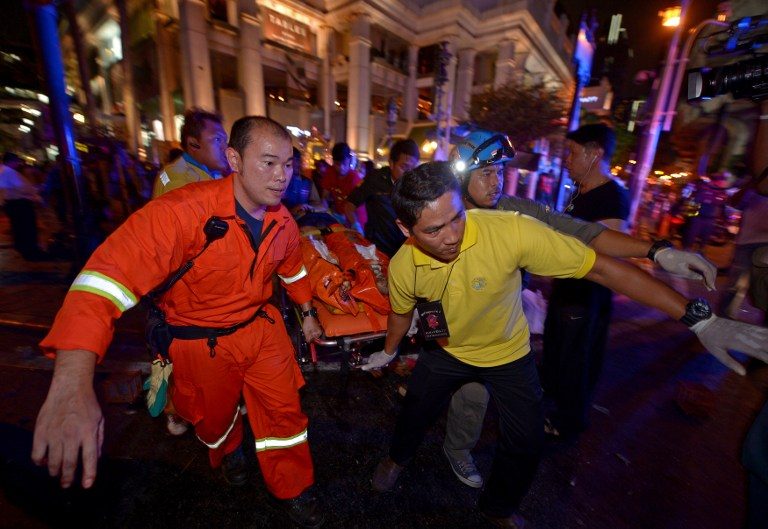 “I saw bodies lying on the ground and I saw vehicles on fire. I feel very sad and sorry that this has happened to Thai people… I’m scared.”

Police confirmed 19 people were killed, including 10 Thais, one Chinese and one Filipino citizen. More than 120 others were injured, according to police.

The nationalities of the other people who died were not immediately clear.

But China’s official Xinhua news agency said two Chinese nationals had died, while the governments of Hong Kong, Singapore and Taiwan reported that some of their citizens were injured. Bangkok has endured years of deadly political violence, with a military junta now ruling the nation, and a decades-long Muslim insurgency in the far south that has claimed thousands of lives. (READ: Filipino killed in Bangkok bombing)

Thailand’s defence minister said the bombing was aimed at foreigners in an attempt to damage the country’s tourist industry, which is a rare bright spot in an otherwise gloomy economy.

“It was a TNT bomb… the people who did it targeted foreigners and to damage tourism and the economy,” said Prawit Wongsuwong, a former general who is believed to have been one of the key coup-makers.

No-one claimed responsibility for the attack, however, and it was unclear immediately who was responsible.

Islamic militants have carried out many attacks in other parts of Southeast Asia, including on Indonesia’s holiday island of Bali in 2002 that killed 202 people.

But they have not made Thailand a prime target.

A government spokesman said it was too early to speculate on who was behind the attack.

The Erawan is an enormously popular shrine to the Hindu god Brahma but is visited by thousands of Buddhist devotees every day. Built in 1956, it is one of the Thai capital’s top tourist attractions.

Glass was strewn across the street after the explosion inside the gates to the shrine, which is in the central Chidlom district close to the famous Sukhmuvit Road shopping strip.

Charred and shattered motorcycles littered the scene, alongside hunks of concrete, with pools of blood on the pavement and two bodies crumpled on the steps of the shrine.

There were also chaotic scenes at Chulakongkorn Hospital, one of a number of nearby medical facilities that received victims as nurses ferried the injured on gurneys.

The attack drew quick expressions of grief from around the world, with UN Secretary-General Ban Ki-moon’s office releasing a statement saying he was shocked.

“He expresses his condolences to the bereaved families and to the people and government of Thailand,” the statement said.

“He hopes that those responsible will be brought to justice.”

The US government released a statement warning its citizens to avoid the area, while also voicing sympathy for the victims.

Although there was no immediate claim of responsibility, the initial comments by Thai police and military cast immediate focus on the kingdom’s rival political factions.

Thailand has been seared by a near-decade of political violence that has left the country deeply divided and seen repeated rounds of deadly street protests and bombings – but none on Monday’s scale.

Many observers had predicted a fresh round of violence after the military seized power in a coup in May last year, toppling a civilian government led by Yingluck Shinawatra.

Self-exiled former premier Thaksin Shinawatra, who is Yingluck’s brother and who was toppled by a 2006 coup, sits at the heart of the political divide.

Parties led by him or his sister or supporters have won every election since 2001 thanks to the votes of the rural north and northeast. But he is loathed by the Bangkok-based royalist elite.

Thailand is also fighting a festering insurgency in its Muslim-majority southernmost provinces bordering Malaysia. More than 6,400 people – mostly civilians – have been killed there.

In the so-called “Deep South”, bombs are a near-daily reality alongside shootings and ambushes of security forces.

Civilians are overwhelmingly the target. But the conflict, which sees local rebels calling for greater autonomy from the Thai state, has stayed highly localised.

There has never been a confirmed attack by the insurgents outside the southern region despite the years of war. – Aidan Jones, AFP / Rappler.com