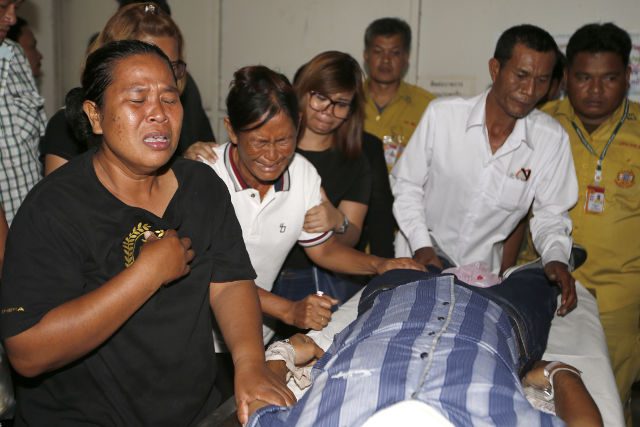 BANGKOK, Thailand – The death toll from a bombing in the Thai capital rose to 20 on Tuesday, August 18, with 123 wounded, police said, with at least 11 foreigners from China, Hong Kong, Indonesia, Malaysia and Singapore among those killed.

Police revised down an earlier toll of 21 dead from Monday’s bombing of the popular Erawan shrine in the heart of Bangkok’s tourist and commercial center.

“The bomb aimed at killing as many people as possible as the shrine is crowded at around 6 to 7 pm,” police spokesman Prawut Thavornsiri toldthe Agence France-Presse

A police breakdown of the nationalities caught up in the blast showed three Chinese, two Hong Kongers, an Indonesian, four Malaysians, one Singaporean and six Thais were confirmed killed.

The three other victims have yet to be identified.

Thais made up the largest number of wounded with 42 being treated, followed by 28 Chinese according to an update released earlier Tuesday.

Japan, Hong Kong, Indonesia, Malaysia, the Maldives, Oman, the Philippines and Singapore all had one or more nationals wounded.

The Erawan shrine sits at the foot of the five-star Grand Hyatt Erawan hotel and is surrounded by a string of other large hotels and malls that draw thousands of visitors each day.

Dedicated to the Hindu god Brahma, it is visited by thousands of Buddhist devotees every day, particularly Chinese visitors who travel to Thailand in larger numbers than any other nationality. – Rappler.com