Facebook Twitter Copy URL
Copied
(UPDATED) Thai police concede they still did not know if a foreign man suspected of planting the bomb at the shrine is in the country or not, nor who he is affiliated with, as they call in help

BANGKOK, Thailand (UPDATED) – Thailand said Thursday, August 20, international terror groups were likely not behind a deadly Bangkok shrine bombing, but appealed for Interpol help in hunting a foreign man accused of being the prime suspect.

The apparent deliberate targeting of tourists and the scale of the explosion had never been seen in the Thai capital and, with no-one claiming responsibility, experts were perplexed over who to blame.

Thai police conceded Thursday they still did not know if a foreign man suspected of planting the bomb at the shrine was in the country or not, nor who he was affiliated with, as they called in help.

Thailand’s national police chief, Somyot Poompanmoung, then gave the most detailed profile of the mysterious group behind the attack, saying more than 10 people were involved and they planned it for at least a month.

But after days of confusing and sometimes contradictory information from Thai authorities over their investigation, they also said they did not believe global terrorist organizations were involved.

“It’s unlikely that it’s the work of an international terrorist group,” Colonel Winthai Suvaree, a junta spokesman, said in a televised update.

He also said: “Chinese people were not the direct target”.

This appeared to be aimed at countering accusations run by some sections of the Thai media that militants representing the ethnic Chinese Uighur minority had carried out the attack.

Adding to the confusion and fears, Prime Minister Prayut Chan-O-Cha said he would not attend a memorial service for the victims at the shrine on Friday because of growing fears for his life.

“I will not go there on the advice of my security. I am not afraid of dying but I am afraid others may die with me as my risk is increasing day by day,” he said at an official function in Bangkok.

Prayut is a former army chief who has ruled the country as a head of a military junta since overthrowing the democratically elected government of Yingluck Shinawatra in May last year.

Thailand has endured a decade of political unrest amid a power struggle that broadly pits the rural and urban poor, led by the populist Shinawatra clan, against a royalist elite backed by the military.

The tensions have repeatedly escalated into deadly violence on the streets of Bangkok, but nothing on Monday’s scale.

An arrest warrant was issued on Wednesday, August 19, for the prime suspect, who was filmed on security footage placing a backpack at the shrine minutes before the blast.

Police also released a sketch showing him in glasses and with dark hair, describing him as tall foreigner with fair skin. 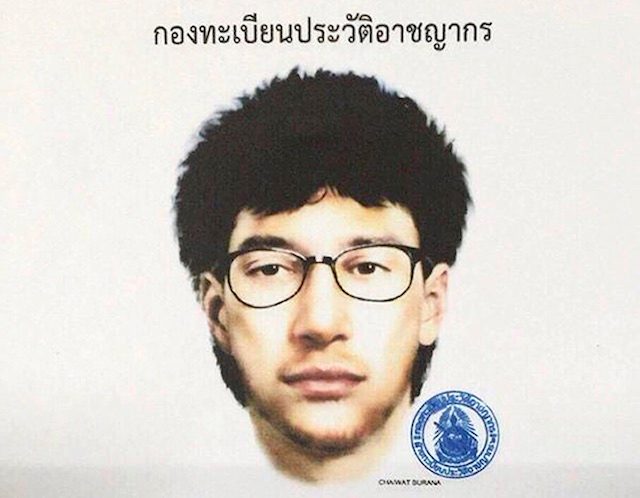 The sketch depicted generally ambiguous features that made it hard to determine his ethnicity.

When asked about his ethnicity, Prawut used a Thai phrase to describe light-skinned Muslims from South Asia, Central Asia and the Middle East.

Police said Thursday they were unsure of his whereabouts.

When asked if the prime suspect was still in the kingdom, police spokesman Prawut Thavornsiri told Agence France-Presse: “I don’t know”.

The bomb struck during Monday’s rush hour in a popular tourist area in the city’s commercial heart, studded by upscale shopping malls and hotels.

It claimed the lives of at least 13 foreigners – from Britain, China, Hong Kong, Indonesia, Malaysia and Singapore.

Another 67 people remained in hospital by late Wednesday, 12 of whom were in critical condition.

It remains unclear who has the capacity and desire to carry out the mass casualty attack on a Southeast Asian nation on an unprecedented scale.

Left with just guesswork, Thai media outlets had cast suspicion on militants from China’s Uighur minority, a group that faces cultural and religious repression in its homeland.

The Erawan shrine is enormously popular among ethnic Chinese visitors from across Asia.

Last month Thailand forcibly repatriated more than 100 Uighur refugees to China, stirring speculation that Monday’s attack may have been an act of revenge.

But Uighur groups are not known to have ever carried out an attack outside China and Winthai’s comments on Thursday appeared to be aimed at quashing that theory.

Islamic militant groups have also targeted parts of Southeast Asia, including bombings on Indonesia’s holiday island of Bali in 2002 that killed 202 people.

But Thailand has not been a prime target.  – Thanaporn Promyamyai, AFP / Rappler.com