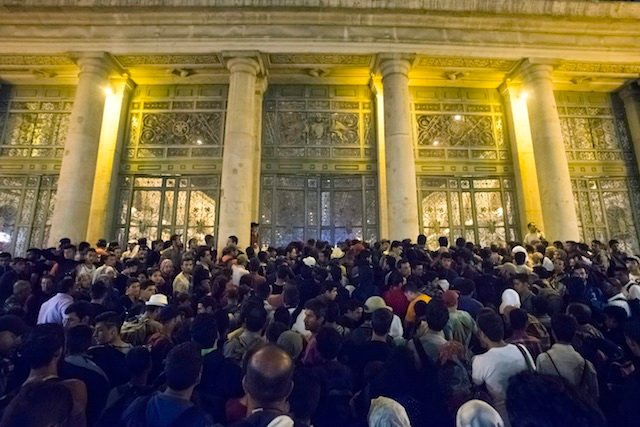 BUDAPEST, Hungary (UPDATED) – Hungarian police evacuated Budapest’s main international rail station on Tuesday, September 1, after hundreds of migrants tried to board trains to western Europe, as new figures showed more than 350,000 have risked their lives so far this year crossing the Mediterranean.

With tensions high as hundreds of police, some in riot gear, moved people out of Keleti station, statistics from the International Organization for Migration (IOM) revealed the gravity of the crisis facing the continent with the biggest movement of people since World War II.

At least 2,600 died on the hazardous journey, drowned or suffocated in dangerous or unseaworthy boats, it added.

Another 114,276 made it to Italy, with most of the other arrivals split between Spain and the island of Malta.

Although there were no clashes between migrants and police in Budapest, several hundred refugees staged an angry demonstration outside the station, an Agence France-Presse correspondent said.

“Germany! Germany! We want to leave!” chanted the crowd, with some holding their babies up in the air.

The station later re-opened but only for non-migrants.

The move came just 24 hours after the EU’s border control procedures were thrown into chaos when police allowed people stuck for days in makeshift refugee camps to leave the Hungarian capital on trains bound for Germany and Austria, despite many not having EU visas.

The decision led the highest number of migrants entering Austria in a single day this year, police confirmed, with 3,650 arriving in Vienna by train on Monday.

Many of the migrants slept at Vienna’s Westbahnhof station, hoping to continue on their journey to Germany, which last week eased asylum restrictions for Syrian refugees.

German police said 2,200 asylum-seekers had turned up in Bavaria by Tuesday morning, many having managed to switch trains in Vienna. The southern German state’s Interior Minister, Joachim Herrmman, said they would not be returned to Hungary.

The wave of people fleeing war, persecution and poverty in the Middle East and Africa “is the greatest challenge for Europe in the coming years”, Spain’s Prime Minister Mariano Rajoy said Tuesday on a visit to Berlin.

The migrants’ plight was brought sharply into focus last week after 71 people, including four children, were found dead in an abandoned truck on an Austrian motorway near the Hungarian border.

So far, police in Hungary and Bulgaria have arrested seven people in connection with the truck tragedy, among them four Bulgarians and one Afghan. The nationalities of the other two were not known.

The grim discovery led to a security crackdown in Austria with huge tailbacks forming along the border on Monday, August 31, and Tuesday, as officers inspected vehicles in search of people-smugglers and migrants.

The escalating situation has divided the 28-member bloc ahead of emergency talks on September 14.

Western European leaders have repeatedly called for greater efforts to help the new arrivals, as countries on its eastern and southern borders warned they were struggling to cope.

Italy on Tuesday said it had rescued 221 migrants crammed into two inflatable boats off the Libyan coast.

But the crisis is rapidly spreading across the continent, with an unprecedented influx of migrants also arriving in Belgium. A makeshift camp has sprung up near the main refugee processing centre in Brussels, where as many as 1,000 queued outside on Monday to apply for asylum.

German Chancellor Angela Merkel earlier warned that the refugee crisis was testing the core ideals of universal rights at the heart of the EU, urging all states to take their fair share of asylum seekers.

She also made veiled criticism of countries like Slovakia which  said it would reject migrants from majority Muslim countries.

“If we start saying ‘I do not want Muslims’… that cannot be good,” Merkel stressed on Monday.

At heart of the crisis lies the question over how to distribute the migrants across the EU and help relieve pressure on so-called “frontline” nations where migrants arrive by sea or land.

Much-flouted EU rules stipulate that refugees should be processed in the first country they reach.

But bloc member Hungary – like Austria, a country of transit for migrants heading to northern Europe – says it cannot host record numbers of newcomers, as 50,000 migrants arrived in August.

Budapest’s right-wing government has criticized Berlin’s easing of asylum rules as “(building) up the hopes of illegal immigrants”.

Hungary’s own response has been to build a razor-wire fence along its border with Serbia to try to keep migrants out.

As vast numbers surge towards Europe with the hope of claiming asylum, a brisk trade in false Syrian passports has emerged, predominantly in Turkey, the EU’s Frontex border agency said on Tuesday.

“There are people who are in Turkey now who buy fake Syrian passports because they know Syrians get the right to asylum in the European Union,” Fabrice Leggeri told French radio station Europe 1.

“People who use fake Syrian passports often speak Arabic. They may come from North Africa or the Middle East but they have the profile of economic migrants,” he said.

Meanwhile, 20,000 people took to the streets of Vienna late Monday in a show of support for migrants, while government officials attended a church service for the 71 refugees found dead last week. – Peter Murphy with Nina Lamparski in Vienna, Austria, AFP / Rappler.com