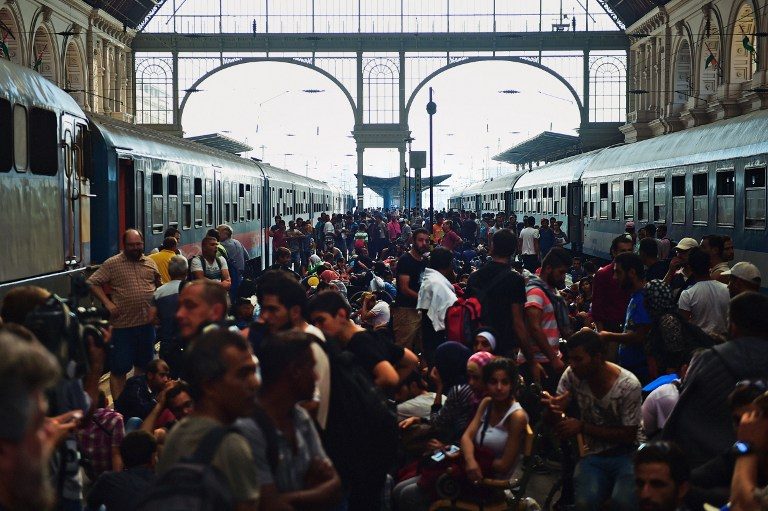 BRUSSELS, Belgium – Europe’s cherished system of borderless travel is increasingly at risk as countries grapple with record numbers of refugees and migrants clamoring to enter their territory, officials and analysts say.

German Chancellor Angela Merkel issued an unusually sober warning this week that the passport-free Schengen zone of 26 countries – hailed as a European success story – was under threat.

With Hungary sealing off its main railway station on Tuesday, September 1, to stop asylum-seekers moving across the European Union, observers fear the genie is out of the bottle and other countries will restore internal borders to curb the flow of humanity.

“If Europe does not take steps as a whole, the current situation is worrying for free movement at the heart of the EU,” Matthieu Tardis, a migration expert based in Paris, told Agence France-Presse.

“Calling Schengen into question is a risk because each state deals with the issue in a very national way based on public opinion – and in the end what is called into question is the crossing of national borders.”

Since its creation in 1995, the Schengen area – named after a border town in Luxembourg – has abolished passport controls for travel between 22 EU countries and non-EU Norway, Switzerland, Iceland and Liechtenstein.

Supporters say Schengen has been a boon for Europe’s single market, slashing costs by doing away with armies of border bureaucrats and sweeping away psychological barriers among Europeans.

But the system is now creaking under the pressure of the biggest refugee crisis since World War II, as people from Syria, Afghanistan and Africa flood into Europe seeking refuge from war and repression.

EU rules say the country where a refugee first arrives must process their asylum claim. But after Germany said last week it would waive those rules for Syrians, there has been a flood of people trying to travel through the EU to get there, and confusion about how migration rules and Schengen overlap.

That in turn is placing huge strain on Hungary, where police blocked hundreds of migrants from boarding trains to Western Europe from Budapest’s main rail station on Tuesday.

Austria has meanwhile tightened controls on motorways near the Hungarian border, where an abandoned lorry was found last week containing 71 dead migrants, four of them children. Police said these were security rather than border checks as they targeted smugglers.

There has been additional pressure on Schengen on the security front, following an attack on a French high-speed train from Amsterdam to Paris last month.

Merkel, Europe’s most powerful leader, brought up the “S” word on Monday, saying that EU states had to settle differences on redistributing migrants from overstretched Italy, Greece and Hungary, or else put the European dream of a borderless continent at risk.

“If we don’t arrive at a fair distribution then the issue of Schengen will arise – we do not want that,” said Merkel, whose country is so far taking the lead on the migrant crisis.

“What is at risk is one of the fundamental pillars of the European Union: the free circulation of people,” he said.

The issue is hugely sensitive, however, particularly because of the crossover with hot-button political issues in the increasingly anti-immigration climate of many European countries.

The European Commission defended Hungary’s right to take steps such as blocking the railway station, as well as refusing to explicitly condemn its new razor-wire border fence with Serbia.

“This is obviously very much Hungary’s prerogative and we welcome efforts to apply EU rules and protect our common external border,” spokeswoman Natasha Bertaud said Tuesday.

But with Brussels expected to unveil new plans to deal with the migrant crisis in coming days, there are signs the EU may take a flexible approach to its huge rulebook in order to ease the Schengen tensions.

Bertaud pointed out that Schengen states were exceptionally allowed to introduce border checks after a security threat – raising the question of whether EU states could claim the huge number of migrants represented just that.

She also acknowledged that “you can never rule out the possibility of future changes being necessary” after pointing out the last Schengen review was in 2013.

Quitting Schengen on the grounds of terrorism or migrants is a “convenient political excuse… but it’s not a solution,” Marc Pierini of the Carnegie Europe think-tank told Agence France-Presse.

“Schengen has brought considerable economic benefits to Europe. We must not forget that.” – Lachlan Carmichael, AFP / Rappler.com