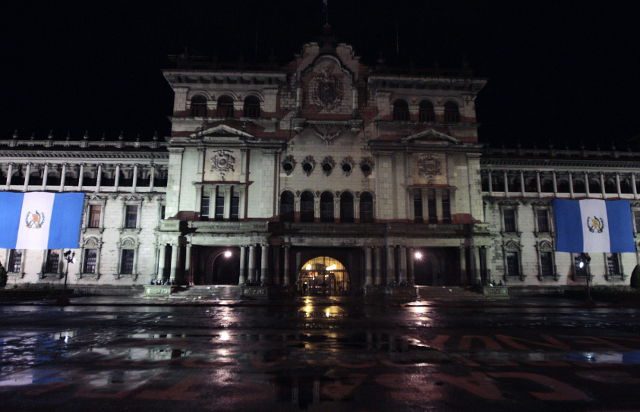 Facebook Twitter Copy URL
Copied
The conservative leader, in power since 2012, decides to step down to confront "individually the proceedings against him,"

The conservative leader, in power since 2012, decided to step down to confront “individually the proceedings against him,” his spokesman Jorge Ortega said, hours after the arrest warrant was issued.

On Tuesday, September 1, Congress stripped him of his immunity, paving the way for him to be prosecuted.

His resignation upsets the political landscape in the central American nation just days before voters go to the polls to elect a new president who will take office in 2016.

Sunday’s election is also being held to choose members of Congress and local mayors.

Vice President Alejandro Maldonado is to assume power until Perez’s successor is sworn in.

Perez is accused of masterminding a huge fraud scheme, known as “La Linea” (The Line), a scandal that already forced his last vice president to step aside.

Six of his 14 ministers have resigned in recent days, along with several other top officials.

Perez is expected to appear before a judge Thursday morning.

Allegations and public pressure have snowballed against his government, leaving him increasingly isolated.

Before the warrant for his arrest was issued Wednesday, Perez’s lawyers filed a court document saying he would cooperate with the investigation, allowing the 64-year-old leader to avoid being taken into custody.

Guatemala’s attorney general said Wednesday she was confident that the embattled former general would be convicted of corruption, after the country’s top court rejected his challenges to prosecutors’ moves to try him.

Investigators accuse Perez of running a scheme in which businesses paid bribes to dodge taxes on their imports, defrauding the country of millions of dollars.

“There’s a criminal case and we will go to trial and then a verdict. In my opinion and based on what I know of the case, it will have to be a conviction,” Attorney General Thelma Aldana told Agence France-Presse.

“At this time we have complete freedom to investigate whatever line of inquiry we deem pertinent in the president’s case,” said Aldana, who was appointed by Perez.

The president had failed in his bid to block the probe, with the Constitutional Court ruling against two motions filed by his lawyers against the investigation and the lifting of his immunity.

Perez is the first president in the Central American country’s history to be stripped of his immunity, a decision that led disgruntled Guatemalans to celebrate Tuesday night, after months of unprecedented protests.

A judge subsequently barred Perez from leaving the country.

Investigators say their accusations are based on some 89,000 wire-tapped phone calls that uncovered “La Linea”, named after a hotline that businesses could call to access corrupt officials and get illegal discounts on their customs duties.

Perez has repeatedly denied involvement and rejected calls from the increasingly virulent protest movement for his resignation. – Rappler.com