Sep 9, 2015 1:24 PM PHT
Agence France-Presse
Facebook Twitter Copy URL
Copied
Immigration, the high cost of living and the need for more assistance to poor and elderly Singaporeans are the main issues being raised by the newly confident opposition 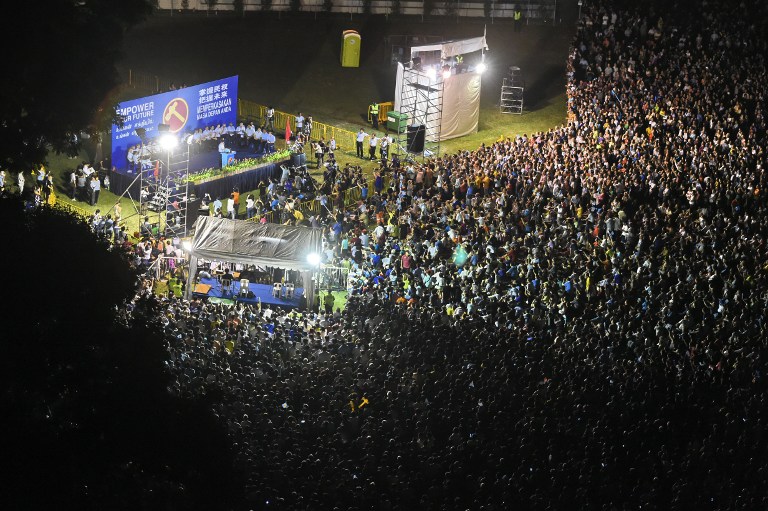 SINGAPORE – Singaporeans vote in snap elections Friday, September 11, that the opposition hopes will dramatically boost its presence in parliament and challenge half a century of ruling party domination, after huge crowds attended its campaign rallies.

Prime Minister Lee Hsien Loong called for polls 16 months ahead of schedule to secure a fresh mandate for the People’s Action Party (PAP), which has been in power for 56 years and is widely expected to win another majority.

The PAP held 80 seats in the last parliament, with the Workers’ Party (WP) occupying the remaining seven – a record for an opposition that has survived a campaign of intimidation that saw some of its figures jailed as dissidents or bankrupted by libel suits.

It will be Singapore’s first election without independence leader Lee Kuan Yew – the father of the current premier – who is credited with Singapore’s rapid rise to prosperity when he was in power for 3 decades.

His death in March generated an outpouring of grief and nostalgia that the PAP hopes will translate into votes on Friday.

But since the 9-day campaign began on September 1, opposition rallies have dwarfed PAP gatherings in both size and intensity.

Immigration, the high cost of living and the need for more assistance to poor and elderly Singaporeans are the main issues being raised by the newly confident opposition.

The repressive tactics that the PAP long used to keep them at bay are gone, under pressure from the scrutiny of social media which sidesteps the government-friendly press, and observers are debating if this vote will finally see the emergence of a two-party system.

All seats are being contested for the first time in half a century but the WP is fielding only 28 candidates for the 89 seats up for grabs, with smaller parties splitting the rest.

“We need at least about 20 elected members of parliament in order for you to have enough resources, minimal resources, to be able to check the government,” WP chief Low Thia Khiang said during a campaign sortie.

An estimated 30,000 people attended a rally staged by the WP in eastern Singapore on Sunday night, September 6.

“It is not only curiosity. One could interpret the large turnouts – by some accounts larger than 2011 – as pointing to WP’s message gaining traction,” said political analyst Eugene Tan, an associate law professor at the Singapore Management University.

“Voters are reciprocating by turning up in full force,” he told Agence France-Presse.

A longtime ban on the publication of pre-election voter surveys makes it difficult to predict the outcome.

In the 2011 election, a public backlash against PAP immigration policies pulled down its share of the popular vote to 60%, its lowest ever. It retained its thumping majority only through a “winner take all” system of electoral blocks.

“It is my expectation that WP will pick up support and has a well-crafted campaign focusing on gradual gains and appealing to concerns of ordinary citizens,” said Bridget Welsh from the Center for East Asia Democratic Studies at National Taiwan University. 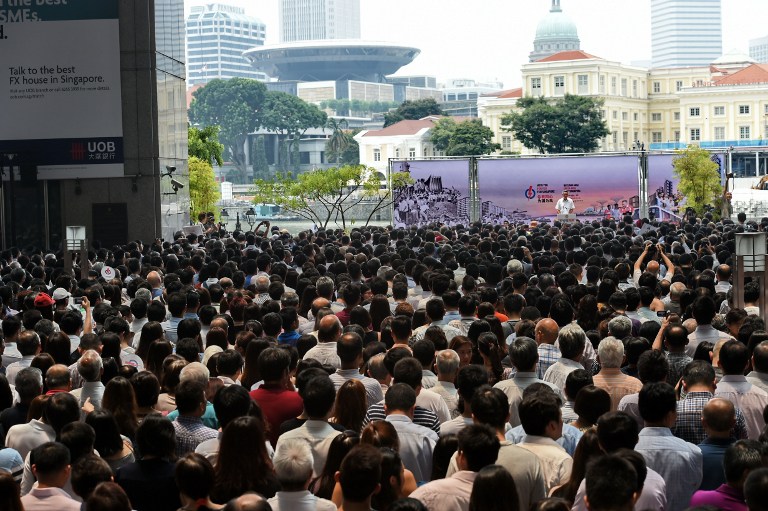 Another opposition group, the Singapore Democratic Party, drew some 5,000 people to a rare rally in the heart of the banking district, held at lunchtime on Monday, September 7.

SDP chief Chee Soon Juan, one of those who endured jail time as well as bankruptcy in a long battle against the PAP, was welcomed like a celebrity and signed autographs.

A PAP rally at the same spot on Tuesday, September 8, led by the prime minister drew a similar sized crowd but most of its other rallies had smaller turnouts.

Immigration remains a hot-button issue in Singapore, which has 2.46 million eligible voters.

Foreign workers and immigrants brought in to mitigate Singapore’s low birth rate have boosted the population from 4.17 million in 2004 to 5.47 million last year.

Citizens complain that newcomers are competing with them for jobs and housing while straining services like mass transport and health care.

Opposition parties say they are not against foreigners – Singapore is an immigrant nation – but are calling for a more calibrated intake.

They also accuse the PAP of failing to address the needs of marginalized people left behind in Singapore’s transformation into one of the world’s wealthiest societies, with a gross domestic product per capita of Sg$71,318 (US$56,284) in 2014. – Martin Abbugao, AFP / Rappler.com