Sep 16, 2015 9:44 PM PHT
Agence France-Presse
Facebook Twitter Copy URL
Copied
However, Colombo did not say whether it would allow international experts to assist its domestic investigation 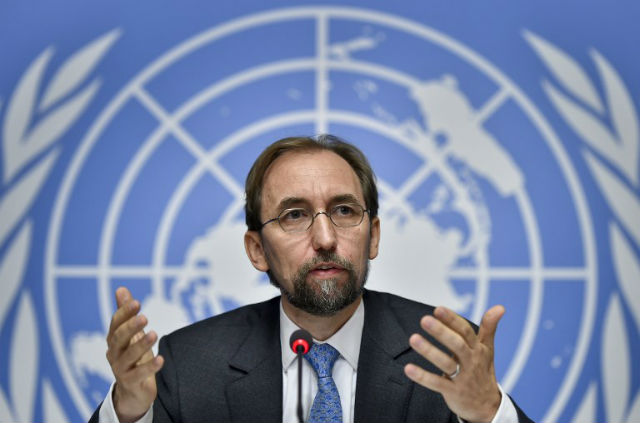 COLOMBO, Sri Lanka – The government told UN rights chief Zeid Ra’ad Al Hussein it was open to dialogue with his office, following the release of the long-awaited report that held both security forces and rebels responsible for war crimes.

Speaking in Geneva earlier in the day, Zeid said Sri Lanka needed international help to address the “horrific level of violations and abuses” during its decades-long separatist war that ended in May 2009.

“(Sri Lanka) takes note also of the OHCHR Investigation on Sri Lanka… and will ensure that its contents as well as recommendations receive due attention of the authorities,” the government said in a response to the 261-page report.

It promised to “ensure dialogue with all stakeholders especially the victims of conflict” as well as communities, international organisations and others “with the aim of achieving reconciliation and durable peace”.

However, Colombo did not say whether it would follow the UN’s key recommendation: that it allow international experts to assist its domestic investigation, a move resisted by previous Sri Lankan governments.

President Maithripala Sirisena came to power in January promising reconciliation between majority Sinhalese and minority Tamils and accountability for atrocities in the conflict, in which 100,000 people died before the Tamil Tigers were crushed.

Colombo, which is planning a series of measures to achieve reconciliation including the creation of a truth commission, had been hoping to win the UN’s backing for a domestic probe.

But Wednesday’s report concluded that “Sri Lanka’s criminal justice system is not yet ready or equipped” to conduct an independent and credible investigation.

Instead, it urged the country to establish a hybrid special court including international judges, prosecutors, lawyers and investigators to probe war-related abuses.

Zeid said a range of previous domestic investigations “were almost designed to fail”, citing deep mistrust of state authorities in the country.

Sri Lanka’s Tamil politicians on Tuesday said they rejected any domestic inquiry, adding that all previous governments had failed to keep their promise to ensure justice for the country’s biggest ethnic minority. – Rappler.com