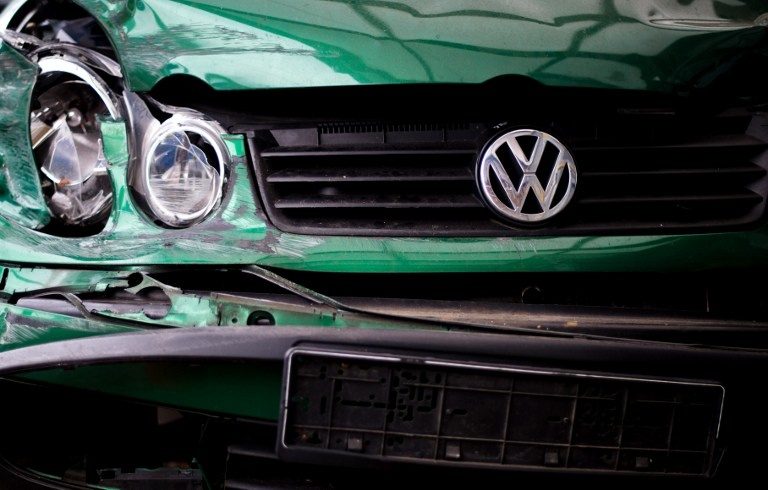 Facebook Twitter Copy URL
Copied
(UPDATED) German auto giant Volkswagen reveal that 11 million of its diesel cars worldwide are equipped with devices that can cheat pollution tests, a dramatic escalation of the scandal that has wiped a third off the company's market value and now threatens to topple its chief executive

FRANKFURT, Germany (UPDATED) – Volkswagen’s pollution cheating scandal escalated dramatically Tuesday, September 22, when the automaker revealed 11 million of its cars worldwide could be affected, wiping a third off the company’s market value and threatening to topple its chief executive.

As the United States opened a criminal investigation into Volkswagen, chief executive Martin Winterkorn offered his “deepest apologies” for the scandal which threatens to tarnish Germany’s pristine industrial reputation.

“I am infinitely sorry that we have disappointed people’s trust. I offer my deepest apologies to our customers, the authorities and to the public at large for our misconduct,” the 68-year-old executive said in a video statement and promised to be “ruthless” in getting to the bottom of the scandal.

The “irregularities… contradict everything that our company stands for,” Winterkorn said. “Manipulation must never again occur at Volkswagen.”

The German firm has halted all diesel vehicles sales in the United States during the US probe, which could lead to fines amounting to a maximum of more than $18 billion.

Authorities from France to South Korea also said they would investigate the affair, prompting Volkswagen to announce that it was setting aside 6.5 billion euros ($7.3 billion) in provisions for the third quarter to cover the potential costs of the scandal.

VW shares, which dived 17% on Monday, closed down a further 19.8% on Tuesday at 106.00 euros, as the automaker’s new revelations, including a warning that it will have to lower its profit outlook, sent investors fleeing.

When US authorities announced Friday that special software on VW diesel vehicles drastically reduced output of pollutants when they were undergoing emissions tests they said it concerned nearly half a million vehicles sold in the United States.

“Further internal investigations have shown that the software concerned is also installed in other diesel vehicles,” VW said in a statement.

“Anomalies have shown up in around 11 million cars worldwide that are equipped with a specific engine type,” added the car manufacturer, the world’s biggest by sales in the first half of this year.

“In order to cover the necessary service and other measures to win back customer confidence, VW plans to set aside 6.5 billion euros in provisions in the third quarter. The group’s earnings targets for 2015 will be adjusted accordingly.”

The impact on the reputation of Volkswagen, whose parent company also owns brands including Audi, Skoda and Lamborghini, is hard to measure.

German Chancellor Angela Merkel called on the company to show “full transparency” to clear up the matter.

While the scandal has been restricted to Volkswagen so far, environment protection groups, particularly in Germany, suspect other carmakers may be using similar technology.

The US Environmental Protection Agency said Monday that it will screen for defeat devices in other manufacturers’ diesel vehicles now on the road, although it declined to identify the automakers whose vehicles will be tested.

German Transport Minister Alexander Dobrindt said however there was no indication so far that others apart from Volkswagen were involved.

Dobrindt said a commission of inquiry – made up of transport ministry staff, employees of the Federal Motor Transport Authority (KBA) and scientists — would travel this week to VW Group headquarters in the northern city of Wolfsburg.

Their mission would be to interview VW experts and examine company documents to verify “whether the vehicles in question were built and tested in full compliance with German and European rules”.

Industry experts believe Winterkorn’s job is on the line.

It said no information has emerged about any decisions taken at the talks, which are to continue on Wednesday.

The regional Hannoversche Allgemeine Zeitung earlier said that “Winterkorn has lost the confidence of the major shareholders”.

The shockwave of the scandal has slashed VW’s market capitalisation by about 25 billion euros to 51 billion euros in just two days.

“Our company was dishonest, with the EPA and the California Air Resources board, and with all of you and – in my German words – we have totally screwed up,” the chief executive of Volkswagen America, Michael Horn, said at an event in New York late Monday, according to video posted by CNBC.

South Korean officials summoned VW representatives for explanations on Tuesday, saying tests would be started by “no later than next month.”

In addition to the environmental probe already under way, the US Department of Justice has launched a criminal investigation, a source told AFP.

The investigation is being led by the US Justice Department’s environment and natural resources division, the source said, speaking on condition of anonymity and confirming media reports.

According to the US authorities, VW has admitted that it had equipped about 482,000 cars in the United States with sophisticated software that covertly turns off pollution controls when the car is being driven and turns them on only when it detects that the vehicle is undergoing an emissions test.

With the so-called “defeat device” deactivated, the car can spew pollutant gases into the air, including nitrogen oxide in amounts as much as 40 times higher than emissions standards, said the US Environmental Protection Agency, which announced the allegations Friday along with California authorities. – Simon Morgan, AFP/Rappler.com