Facebook Twitter Copy URL
Copied
Another tragedy has struck the Hajj pilgrimage, after a stampede kills at least 717 people and injures hundreds more

JAKARTA, Indonesia (6th UPDATE) – Another tragedy has struck the Hajj pilgrimage, after a stampede kills at least 717 people and injures at least 800.

Interior Ministry spokesman Brigadier General Mansour al-Turki is quoted by CNN saying, “We have a stampede accident in Mina and civil defense is dealing with it.”

Al-Arabiya news says the stampede happened during a ritual called “stoning of the devil,” on the third day of the pilgrimage. The tragedy happened in a small street named Street 204. 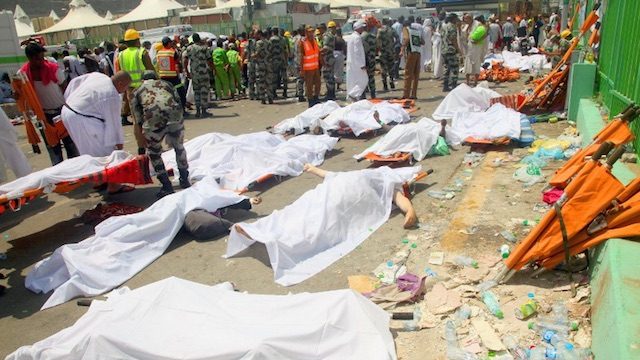 Siraj Wahab, senior editor at Arab News tweeted updates, saying “The tragedy occurred near Jamrat Al-Aqaba, the last of the three wall-like structures, during the stoning of the devil ritual.”

He added, “We are outside Mina Al-Jisr Hospital. Dozens of ambulances are bringing in the injured. Many are semi-conscious.”

Other tweets talked about how the dead and injured are pilgrims of all ages. He said all hospitals around the area are all on high alert.

Two hours after the tragedy, the wailing of ambulances continues to rent the air in Mina. All hospitals have declared emergency.

The entire Saudi leadership is here in Mina monitoring the rescue efforts.

Among the injured are people of all ages, not just the elderly.

Rescue operations are ongoing with the civil defense team leading pilgrims away from the site of the accident. About 4,000 troops have been deployed to restore safety and order, however pilgrims were undeterred despite the accident, continuing their pilgrimage even after the reported deaths.

The tragedy comes less than 2 weeks after a construction crane collapse that killed at least 107 people during a storm at Mecca’s Grand Mosque, days before the annual hajj pilgrimage.

Saudi Arabia decided to continue this year’s hajj despite the crane tragedy.