Police say local politics could still be behind Bangkok blast

Sep 28, 2015 8:44 PM PHT
Agence France-Presse
Facebook Twitter Copy URL
Copied
Strong speculation has also centered on a link to militants or supporters of the Uighurs, an ethnic group who say they face severe persecution in China 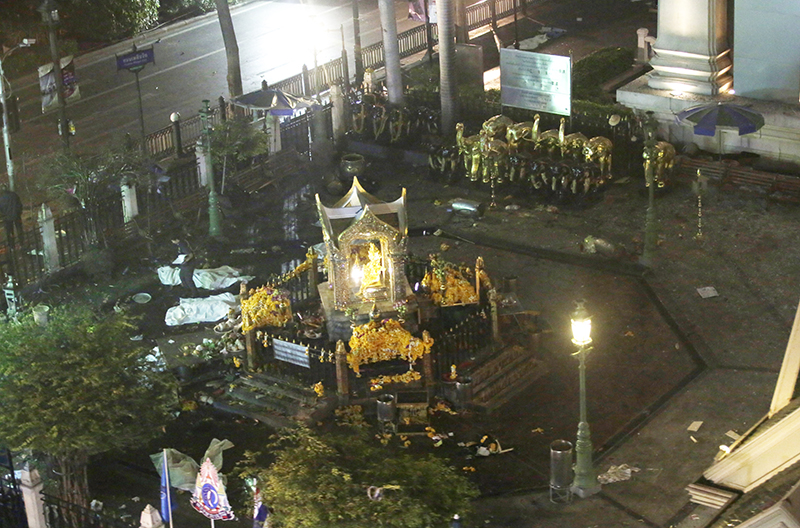 BANGKOK, Thailand – Thai police said Monday, September 28, that domestic politics could have been a factor in last month’s deadly Bangkok blast as they revealed one local suspect was linked to previous bombings in the kingdom.

Mystery still surrounds the motive for the August 17 attack on a religious shrine in a busy shopping district which killed 20 people, the majority of them ethnic Chinese tourists.

Investigators have previously said they believe it was most probably a revenge attack by a people-smuggling gang angered at a recent crackdown on their illicit business.

Strong speculation has also centered on a link to militants or supporters of the Uighurs, an ethnic group who say they face severe persecution in China.

In July, Thailand forcibly deported a group of 109 Uighurs back to China, sparking widespread condemnation.

Two foreigners accused of planting the bomb have been arrested and charged.

One is a Chinese passport-holder with Uighur ethnicity and the other, according to his lawyer, is a Chinese Uighur who settled in Turkey.

Arrest warrants are out for a further 17 others, both Thais and foreigners, some of whom are named.

But they said those with local political grievances might still be involved and could have teamed up with an international people-smuggling gang.

“It could be two groups of people who have the same aims to achieve the same thing. One group might have used the other group but they both earned the same benefit,” national police chief Somyot Poompanmoung, who retires on Wednesday, told reporters.

It is the first time police have suggested a link to Thailand’s turbulent street politics.

Explaining their latest theory in an investigation beset with contradictory and confusing statements, police said one Thai national wanted in connection with the bomb blast was called Yongyuth Phobkaew, also known as “Odd”.

Police said he is linked to a motorcycle bomb last year that killed two and a 2010 blast at an apartment complex in Nonthaburi north of Bangkok, in which four people died.

At the time police blamed the 2010 blast on the “Red Shirt” movement loyal to ousted prime minister Thaksin Shinawatra.

Police believe Odd was also involved in the shrine blast.

“Odd was in the team making the bomb,” Sriwara Ransibrahmanakul, head of the Metropolitan Police Bureau, told reporters. “He does not have enough knowledge to make the entire bomb but he provided equipment.”

Bangkok has endured a decade of deadly political violence amid a bitter power struggle.

On the one side stands the military, backed by the middle class and elite. On the other, the rural and urban poor loyal to Thaksin, toppled in a 2006 coup, and his sister Yingluck who was forced out of office days before the current junta seized power last year.

But experts have said neither side had much to gain by launching such a brutal attack. The Red Shirts have denied any involvement in the shrine bomb. – Rappler.com