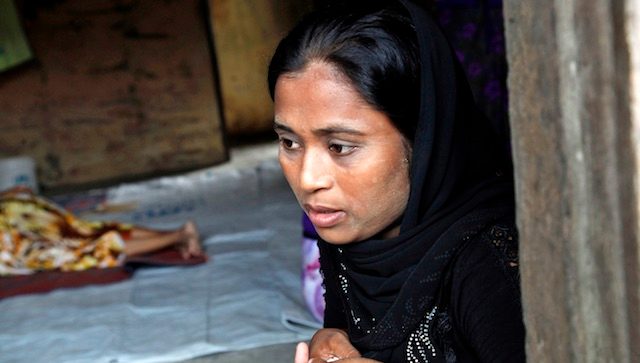 Facebook Twitter Copy URL
Copied
Four Rohingya women, aged from 14 to 28, say they were attacked by a group of local men

BANDA ACEH, Indonesia – Indonesian police were Wednesday, September 30, investigating claims that several Rohingya women were sexually assaulted by local men outside a camp housing members of the Myanmar minority who had arrived as migrants by boat.

The probe came a day after anger at the alleged attack sparked a mass walkout. (READ: Rohingya: The people ASEAN refuse to name)

Hundreds of Rohingya, a Muslim group which has long suffered persecution in Buddhist majority Myanmar, have been languishing in the camp since they came ashore in May.

They arrived during a regional migrant crisis sparked by a crackdown on long-established human-trafficking routes. (READ: Fast facts: Who are the Rohingya?)

Four Rohingya women, aged from 14 to 28, said they were attacked by a group of men on Monday evening shortly after sneaking away from the camp, in Blang Ado, western Aceh province, with 3 children and two men, police said.

It was not clear where they were going, but many who leave the camp head for neighboring, more affluent Malaysia, the favored destination for many of the region’s migrants. (READ: UN: ASEAN ‘better late than never’ on Rohingya)

Rumours of the alleged attack spread around the camp the following day, prompting a mass walkout by hundreds of refugees, many taking their few possessions with them, according to police.

They eventually returned but one volunteer at the camp, who wished to remain anonymous, told AFP anger mounted again when an ambulance later came to take the women to hospital for examination.

“The refugees tried to block the ambulance, and threw stones,” he said.

Two of the women were persuaded to attend the hospital, with police awaiting the outcome of the examination before pursuing suspects, said Triarsono Anang, assistant commissioner of police in nearby Lhokseumawe city.

“We are still investigating and gathering evidence,” he told AFP. “So far, we haven’t questioned anybody because we are still awaiting the results of the doctor’s examination.”

Aceh, a staunchly Islamic province, has generally been welcoming of the Muslim Rohingya.

The regional migrant crisis erupted when a Thai crackdown on the lucrative smuggling industry prompted traffickers to abandon their human cargo of Bangladeshi and Rohingya migrants at sea.

Thousands arrived by boat in Indonesia, Malaysia and Myanmar. Previously, most had arrived in Thailand before walking across the border to Malaysia. – Rappler.com