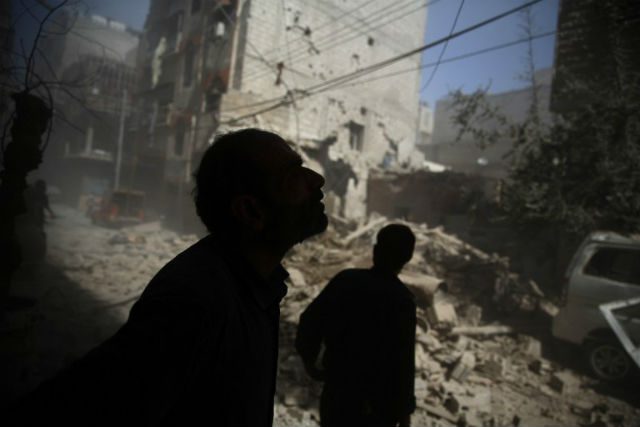 BEIRUT, Lebanon – At least 12 members of the Islamic State group have been killed in Russia’s first air strikes on the jihadist faction’s main Syrian bastion, a monitoring group said on Friday, October 2.

Russian air attacks also targeted the Army of Conquest, the most powerful Islamist coalition battling Syrian regime forces in the northwest, a security source on the ground said.

The defence ministry in Moscow confirmed it had carried out strikes on Raqa province on Thursday, as well as raids on the provinces of Aleppo in the north, Idlib in the northwest and Hama in central Syria.

The strikes are the first time Russia has targeted IS’s stronghold in Raqa province, the de facto Syrian capital of its self-styled “caliphate”.

The Syrian Observatory for Human Rights said those strikes had killed at least a dozen ISIS fighters.

“The residents are very afraid, especially if the Russians are going to operate like regime planes by targeting civilians,” said activist Abu Mohammad who is from Raqa.

Speaking to AFP via the Internet, he said residents were staying indoors, and IS “has started to implement a plan to turn off electricity in a number of areas of the city when planes are overhead”.

Moscow said Friday its warplanes had “conducted 18 sorties on 12 positions held by the Islamic State terrorist group in Syria” since Thursday.

The defence ministry said raids destroyed “a command post and communications centre” held by ISIS in Daret Ezza in Aleppo province and “completely destroyed” bunkers and weapons depots in Maaret al-Numan and Habeet in Idlib province.

According to the Observatory, IS does not control any of these areas. Kafr Zeita is held by Islamist rebels, while the areas in Idlib and Aleppo are held by IS’s jihadist rival, Al-Qaeda’s Syrian affiliate Al-Nusra Front.

According to several military sources and the Observatory, Russia continued its air strikes in several Syrian provinces on Friday.

A security source said that “Russian planes conducted several strikes on military positions and command centres held by the Army of Conquest in Jisr al-Shughur… and Jabal al-Zawiya in Idlib”.

The Army of Conquest fiercely opposes both IS and President Bashar al-Assad’s regime.

Headed by Al-Nusra, it controls all of Idlib province and has advanced on Assad’s provincial stronghold of Latakia further west.

It said Russian raids on Khan Sheikhun in Idlib province had killed two Al-Nusra fighters, and that Latamina in Hama province had been hit as well.

A Syrian military source told AFP that Russian strikes on Friday targeted an ancient Christian town in Homs province seized by IS on August 5.

On Friday, ISIS launched a fierce attack on Syria’s eastern city of Deir Ezzor and a nearby military airport, the Observatory said.

ISIS controls most of Deir Ezzor province and part of the city, but has tried for months to seize all of the provincial capital.

The latest violence came amid concerns that Russia is concentrating on groups opposed to Assad’s embattled regime, instead of specifically targeting ISIS.

Moscow insists it is targeting ISIS and “other terrorist groups..” – Rappler.com