Sports events in Singapore, Malaysia cancelled due to haze

Oct 3, 2015 11:35 PM PHT
Agence France-Presse
Facebook Twitter Copy URL
Copied
The first day of the Singapore leg of the FINA World Championships is cancelled, while the Standard Chartered Kuala Lumpur Marathon set for Sunday will not be held as well 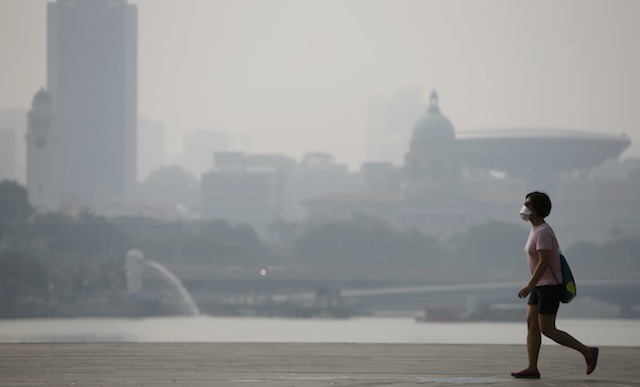 SINGAPORE – A swimming event in Singapore did not push through on Saturday, October 3, while a Sunday marathon in Malaysia was likewise cancelled due to haze from agricultural fires on a nearby Indonesian island.

Organizers on Saturday cancelled the first day of the Singapore leg of the FINA World Championships due to the choking haze.

Fifteen events supposed to be held Saturday evening at an open-air swimming complex were cancelled, organizers said in a statement.

Competitors include 4-time Olympic gold medalist Missy Franklin of the United States, who was slated to make her competitive debut in Singapore for the 200m backstroke.

Organizers said it was the first time that the Singapore leg of the FINA World Championships had been cancelled since the city-state hosted the competition in 2007.

“The level of haze in the venue overpassed the limit established by the Singapore government,” FINA said in a statement.

It said the health of athletes, spectators and officials “is the top priority for FINA, therefore the events were cancelled”.

Organizers offered refunds for spectators who had already purchased tickets.

The cancelled events will not be carried out on the second day of the competition on Sunday.

Competitors will use their best times recorded in Hong Kong, Beijing, and the Singapore heats to decide on the payment of the prize money, the organizers said.

Organizers said Sunday’s races were officially on but they will further monitor the haze conditions and will cancel if the air quality remains above the Pollutant Standards Index threshold.

Malaysia, Singapore, and large expanses of Indonesia have suffered for weeks from acrid smoke billowing from fires on plantations and peatlands that are being illegally cleared by burning on the Indonesian island of Sumatra. (READ: Indonesia declares state of emergency in haze-choked province)

The crisis grips the region nearly every year during the dry season, flaring diplomatic tensions among the neighbours as flights are grounded, schools close and pollution levels reach hazardous highs.

One of Malaysia’s biggest marathons was also cancelled on Saturday over fears that the health of more than 30,000 runners was at risk from thick smoke caused by Indonesian forest fires.

Organizers of the Standard Chartered Kuala Lumpur Marathon set for Sunday said it would not be held due to worsening air quality in Kuala Lumpur, which was shrouded in an acrid grey haze from the slash-and-burn fires.

Robert Field, a Columbia University scientist based at NASA’s Goddard Institute for Space Studies, has been quoted by the space agency as saying that a possible longer dry season might make the 2015 haze crisis “the most severe on record.”

Scientists predict the current crisis could surpass 1997 levels, when out-of-control fires sent pollution soaring to record highs in an environmental disaster that cost an estimated US$9.0 billion.

The fires on plantations and peatlands that are being illegally cleared by burning are located on Indonesia’s huge islands of Sumatra and Borneo.

Close to half of Malaysia’s 52 pollutant monitoring stations around the country, including those in the capital, registered “unhealthy” air quality on Saturday.

“The health and safety of all our runners remains our top priority,” organizers of the marathon, with prize money at $120,000, said in a statement on their website.

Runners applauded the cancellation of Kuala Lumpur’s 42.2-kilometer marathon, with some taking digs at Indonesia over the mess.

Another social media remark read: “Wise decision by the organizers. No one wants to cancel a big event like this but the air quality is really bad. Safety of runners is of paramount importance.”

The annual Kuala Lumpur race has gained popularity since it started in 2009 with more participants from overseas taking part over the years. – Rappler.com