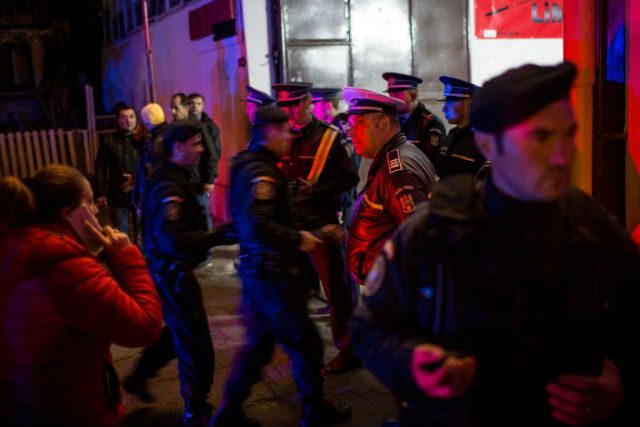 Facebook Twitter Copy URL
Copied
The blaze broke out at around 11:00 pm at the Colectiv night club, where hundreds of people had gathered for a gig by rock group Goodbye to Gravity

BUCHAREST, Romania – At least 27 people were killed and more than 160 injured after a fire ripped through a nightclub in Bucharest late on Friday, in one of the worst accidents to hit the Romanian capital.

The blaze broke out at around 11:00 pm (2100 GMT) at the Colectiv night club, where hundreds of people had gathered for a gig by rock group Goodbye to Gravity.

Hospital sources said the death toll could rise as at least 25 people were in critical condition.

“This is the worst tragedy of its kind” to have ever happened in Bucharest, said the secretary of state for the interior, Raed Arafat.

Witnesses quoted by local media described scenes of chaos when fireworks, let off as part of the show, set fire to a pillar and part of the ceiling.

The crowd panicked as thick smoke engulfed the room, leaving people scrambling to escape from the underground club located in a communist-era basement.

“People were fainting, they were fainting because of the smoke. It was total chaos, people were trampled,” witness Victor Ionescu told local television station Antena 3.

Many of the wounded were suffering from leg injuries after being trampled in a stampede and smoke inhalation, according to health authorities.

The bassist and singer in Goodbye to Gravity, who were playing a gig to promote their new album, were among those seriously injured, Antena 3 said.

Only one exit open

Another witness, Alain Panduru, said the fire spread in seconds.

“People could not get out of the club because there was only one exit open and the stampede happened immediately,” he told online news portal Hotnews.

Several media outlets reported that a second exit was closed when the blaze broke out.

The interior ministry said 27 people had died so far, most of them teenagers and young people, while 162 injured were being treated in several hospitals in the capital.

Police have started an investigation and in the early hours of Saturday morning groups of sombre-faced officers were still sifting through evidence outside the club.

Interior Minister Gabriel Oprea said a meeting had been called of a national emergency committee from 0500 GMT on Saturday, which would include representatives from across the government.

President Klaus Iohannis said he was “shocked” by the incident, adding that he was in “deep pain following the tragedy that took place this evening in the centre of the capital”.

“It is a very sad moment for our nation,” he said in a post on his Facebook page, expressing his “solidarity and compassion” for the families of the victims.

Oprea branded the incident a “tragedy” and his ministry said several telephone lines have been set up to keep friends and family of those hurt informed.

Identifying the victims has proved difficult as many were not carrying IDs. Music website Metalhead has published a list of anyone who has been hospitalised and was able to give their name on its Facebook page.

A Facebook page has already been set up calling on Romanians to donate blood.

“A tragedy has happened this evening in Bucharest. There is currently enough blood, but tomorrow we will need all of you,” said a statement on the page, encouraging people to head to the city’s blood transfusion clinic in the morning. – Isabelle Le Page, AFP/Rappler.com