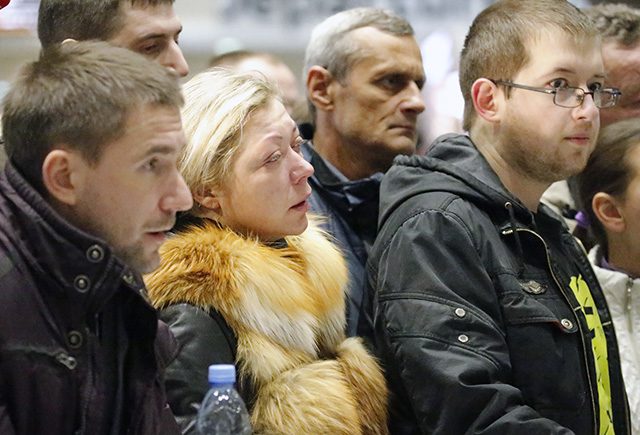 Facebook Twitter Copy URL
Copied
(2nd UPDATE) Officials say the charter flight, which was bound for Saint Petersburg in Russia, had on board 217 passengers and 7 crew members

CAIRO, Egypt (2nd UPDATE) – A Russian plane with 224 people on board crashed in a mountainous part of Egypt’s Sinai Peninsula on Saturday, October 31, with medics at the site reporting casualties, officials said.

Ambulances reached the site and began evacuating “casualties,” officials and state media reported, without elaborating on their condition.

The plane took off early Saturday from the southern Sinai resort of Sharm el-Sheikh bound for Saint Petersburg in Russia but communication was lost 23 minutes after departure, officials said.

“Military planes have discovered the wreckage of the plane… in a mountainous area, and 45 ambulances have been directed to the site to evacuate dead and wounded,” a cabinet statement said.

Officials and the state MENA news agency later said the “casualties” were being transferred to nearby hospitals.

“I am meeting my parents,” said 25-year-old Ella Smirnova, a tall young woman seemingly in shock. “I spoke to them last on the phone when they were already on the plane, and then I heard the news.”

“I will keep hoping until the end that they are alive, but perhaps I will never see them again.”

A senior Egyptian aviation official said the plane was a charter flight operated by a Russian company carrying 217 passengers and 7 crew members.

The official said the plane was flying at an altitude of 30,000 feet when communication was lost.

He said the Airbus 321 did not make contact as expected with air traffic controllers in Cyprus.

“Communication was lost today with the Airbus 321 of Kogalymavia which was carrying out flight 9268 from Sharm el-Sheikh to Saint Petersburg,” Lzvolsky later told Russian television networks.

“The plane departed Sharm el-Sheikh with 217 passengers and 7 crew members. At 7:14 Moscow time the crew was scheduled to make contact with… Larnaca, however this did not happen and the plane disappeared from the radar screens.”

The flight was scheduled to land at Saint Petersburg at 0912 GMT, he said.

The contents of the plane’s last communication with ground crews were not immediately disclosed.

The wreckage was found in a mountainous area roughly 100 kilometres (60 miles) south of the North Sinai town of El-Arish, Egyptian officials said.

State television reported that Prime Minister Ismail Sharif was headed to the site of the accident.

The last major commercial airliner crash in Egypt happened in 2004, when a Flash Airlines Boeing 737 plunged into the Red Sea after taking off from Sharm el-Sheikh.

The 148 people aboard that flight, most of whom were French, were killed.

Millions of tourists, many of them Russian, visit the resort town, one of Egypt’s major draws for tourists looking for pristine beaches and scuba diving.

The resort, and others dotting the southern Sinai Red Sea coast, are heavily secured by the military and police as an Islamist militant insurgency rages in the north of the restive peninsula, which borders Israel and the Gaza Strip.

Militants in the north who pledged allegiance to the Islamic State group have killed hundreds of soldiers and policemen since the army ousted Islamist president Mohamed Morsi in 2013. – Samer Al-Atrush and Tony Gamal-Gabriel, AFP/Rappler.com