Myanmar: Time for the vote

Nov 7, 2015 10:12 PM PHT
Nicholas Farrelly
Facebook Twitter Copy URL
Copied
'It is time for the Myanmar people to have their say' 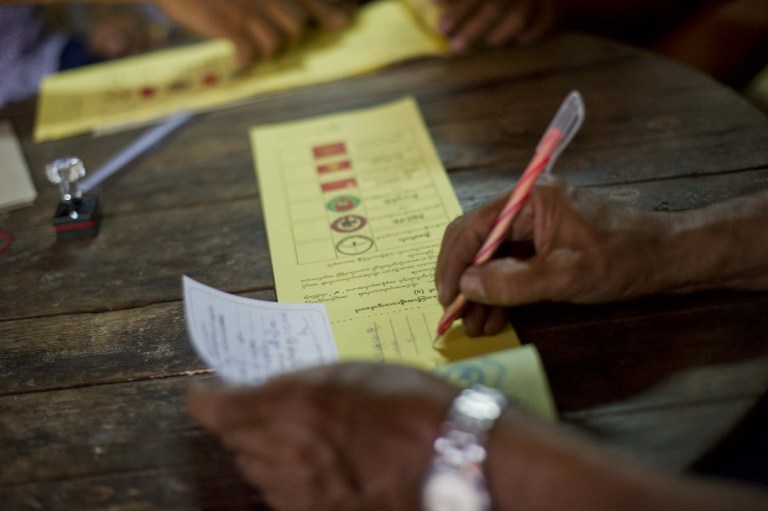 The Myanmar people have waited impatiently for this Sunday’s (November 8) election. It marks another milestone in the slow march toward a more open and prosperous society.

Among the many momentous changes that have occurred this last busy half-decade, improved flows of information must be high on the list. Before President U Thein Sein there were few good ways to get consistent information about what was going on across the country. Rumor regularly substituted for fact.

Researchers, journalists and diplomats struggled for access, and many Myanmar government authorities were simply off-limits.

Nowadays if you want to know answers to significant questions it is often as easy as making a phone call, sending an introductory letter, and waiting for the positive response. Requests for meetings are answered in the affirmative on a surprising number of occasions.

In practice this means that more people than ever before have enjoyed the chance to sit down with Myanmar’s decision-makers, big and small. From militia commanders to Rakhine hyper-nationalists, provincial tycoons to retired Tatmadaw colonels; almost everyone has become available for a chat.

You can see such changes in the increasing number of academic offerings that relate to Myanmar. In 2015 my own institution, the Australian National University, offered 3 Myanmar-themed field courses. One focused on art history, one on the borderlands and one on Myanmar’s new political economy.

The political economy course, as one example, encouraged students to get up close with the changes under way in the country. It offered them the chance to explore Yangon, Bagan and Nay Pyi Taw. They managed to squeeze in high-level meetings, tours of key national infrastructure and classes with their counterparts at the University of Yangon.

These are precisely the types of interactions that were so rare before the Thein Sein government took power.

That political economy course saw the students sit down with a number of Myanmar’s top players. From the Myanmar Peace Center to the Amyotha Hluttaw, they got to ask questions of the people who have been most heavily involved in deciding what happens next.

In a stunning arrangement they even managed an hour of sit-down discussion with the defense minister, Lieutenant General Wai Lwin.

Such rare opportunities will catalyze the next generation of interaction and activity, and help anyone seeking to understand Myanmar to get a better appreciation of its enduring challenges.

One of the reasons I write this weekly column for The Myanmar Times is that, for far too many years, there were draconian restrictions on public commentary and academic debate. Pre-publication censorship starved the oxygen from the open contest of ideas.

With the end of that pitiful system, we have a shared responsibility to show that critical, engaged and thoughtful commentary has a place in Myanmar society.

And with the election on Sunday, we are about to see the busiest period of political coverage in the country’s history. With so many new technologies, and with such relatively open access, the people of Myanmar have a better chance than ever to participate in the process.

The rest of us will also have more data and anecdote to deal with than ever before. The challenge for journalists and analysts will be to quickly absorb as much of this important material as possible.

The fact is that the world’s attention span for Myanmar news is still very limited. Beyond the gushing platitudes for Daw Aung San Suu Kyi, and the standard admonishments of military rule, most reports will struggle to explain the context of 2015’s historic vote.

Yet what such reports should consider is that this election could not have happened without the input and participation of so many people and organisations.

Many have struggled long and hard, from inside the system and from many other places, to help make this vote happen. It will not be the end of Myanmar’s problems but it does offer a further indication that the old system will not return.

Thankfully, that system eventually learned to tolerate a level of dissent and thus unleashed the creative potential of tens of millions of people.

So it makes sense to be optimistic. Those who only see the downside of these changes would, in all likelihood, find even the world’s most progressive governments a perpetual downer.

The fact is that Myanmar does not enjoy a history of any progressive government. Even the National League for Democracy is likely to disappoint those who expect miraculous or immediate change to generations of entrenched practice.

Instead we need to accept that after the election the turbulence will not end. But with more openness than ever, with greater freedom of movement than before, and with a new spirit of inclusion waiting to be embraced, there is every chance that Myanmar will keep getting better.

With that goal in mind, it is time for the Myanmar people to have their say. – Rappler.com

Nicholas Farrelly is director of the Myanmar Research Centre at the Australian National University and co-founder of New Mandala. This piece is republished with permission.

This was first published by The Myanmar Times on November 2, 2015, and on the New Mandala on November 4, 2015. New Mandala, hosted by the Australian National University’s (ANU) Coral Bell School of Asia Pacific Affairs, provides anecdote, analysis and new perspectives on mainland Southeast Asia.