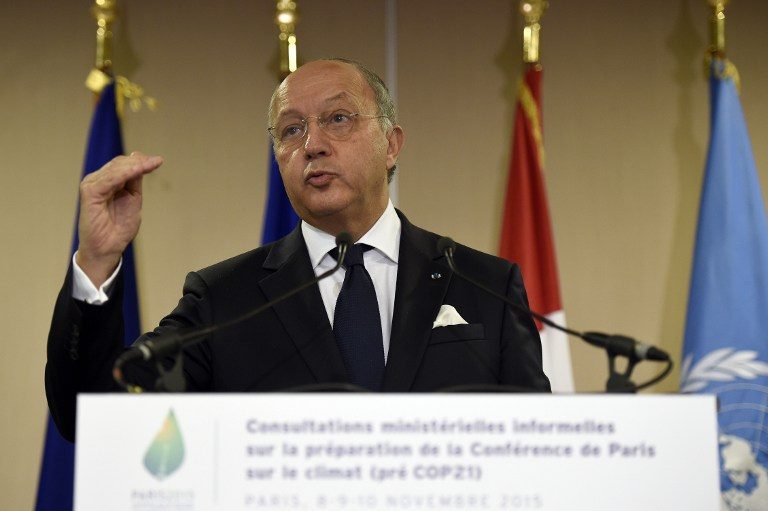 Facebook Twitter Copy URL
Copied
(UPDATED) UN climate chief Christiana Figueres: 'It continues to be entirely possible to come to an agreement... despite all the challenges in front of us.'

PARIS, France (UPDATED) – Ministers and negotiators from more than 75 nations have made headway in talks ahead of a crunch UN climate summit but “the task ahead is considerable”, France’s foreign minister said Tuesday, November 10.

Laurent Fabius, who will preside over the November 30-December 11 conference in Paris, told journalists the 3 days of talks, which ended Tuesday, had been an important step and “progress has been made on at least 5 points”.

But he warned “the task ahead is considerable”.

UN climate chief Christiana Figueres added: “It continues to be entirely possible to come to an agreement… despite all the challenges in front of us.”

Fabius announced that 117 heads of state and government – including US President Barack Obama, China’s Xi Jinping, Narendra Modi of India and Russia’s Vladimir Putin – have confirmed they will attend the summit, tasked with inking a pact to stave off dangerous levels of global warming.

A rough draft of that hoped-for agreement has been drawn up by rank-and-file diplomats, with ministers set to sign the final deal at the end of the Conference of Parties (COP) in Paris.

The deal will be underpinned by national pledges to curb greenhouse gas emissions from burning fossil fuels blamed for climate change.

The “pre-COP” meeting sought to identify areas of potential compromise on issues still dividing nations and so avoid a repeat of the 2009 Copenhagen summit which ended without a binding global pact.

Fabius said there was momentum towards ensuring that countries ratchet up their efforts to slash carbon pollution beyond pledges submitted ahead of the summit.

“A review should take place every 5 years… to prepare an upward revision of national plans,” he said.

Saudi Arabia, the world’s biggest crude oil exporter, filed its climate pledge on Tuesday, saying up to 130 million tonnes of carbon dioxide equivalent per year would be “avoided” by 2030.

“The COP21 will put in place the mechanism to close the gap,” Manuel Pulgar-Vidal, Peru’s environment minister, told Agence France-Presse. “Getting to 2ºC depends on boosting our ambition.”

Enshrining the principle that nations would not be allowed to backtrack on their carbon-cutting promises is also gaining ground, Fabius said.

Another make-or-break issue on the table in the 3-day talks was money for developing nations to help them decarbonize their economies, and shore up defenses against unavoidable climate impacts.

“Climate finance was very central” to the discussions, said Thoriq Ibrahim, Minister of the Environment and Energy for the Maldives, one of many small island states whose very existence is threatened by rising seas.

“Adaptation is a matter of survival for us,” he told Agence France-Presse. “Nobody wants to leave the Maldives, we are there to stay.”

African leaders said they were looking to the talks for solutions to electrify the continent, grow its economies and keep their young people from fleeing abroad.

The 195-nation UN climate forum has officially adopted the goal of limiting global warming to 2ºC, but many vulnerable and poor nations are pushing for that threshold to be lowered to 1.5 Cº.

Recent scientific studies have shown that even if the 2ºC goal is attained, the impact could be devastating in many parts of the world.

A 2ºC rise would submerge land currently occupied by 280 million people, while an increase of 4ºC would cover areas home to 600 million, according to a study published by Climate Central, a US-based research group. – Marlowe Hood, AFP / Rappler.com