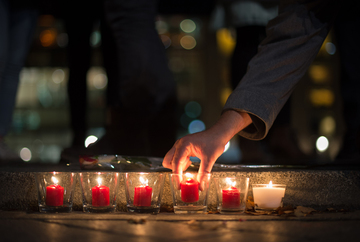 PARIS, France – “This time it’s war,” declared the Le Parisien daily, as France’s media reacted with horror but determination after the wave of attacks that left at least 120 dead on Friday, November 13.

Center-right daily Le Figaro took up a similar theme, splashing with the headline “War in central Paris” amid scenes of carnage at several locations in the French capital. (READ: IN PHOTOS: November 13 Paris attacks)

Many papers called for unity in the country that is still reeling from jihadist attacks in January that claimed 17 lives.

The “terrorist barbarism” has crossed a “historic line,” said the head of the left-leaning Liberation daily, calling for France to stay resolute.

“It is impossible not to link these bloody events with the battles raging in the Middle East. France is playing its part there. It must continue to do so without blinking,” wrote Laurent Joffrin in an editorial.

Papers immediately made the link between the attacks on the Charlie Hebdo satirical magazine that claimed 17 lives in January, spawning an outpouring of solidarity around the Twitter hashtag #jesuischarlie (I am Charlie).

“We were Charlie. We are Paris!” wrote the Republique des Pyrenees regional daily. – Rappler.com