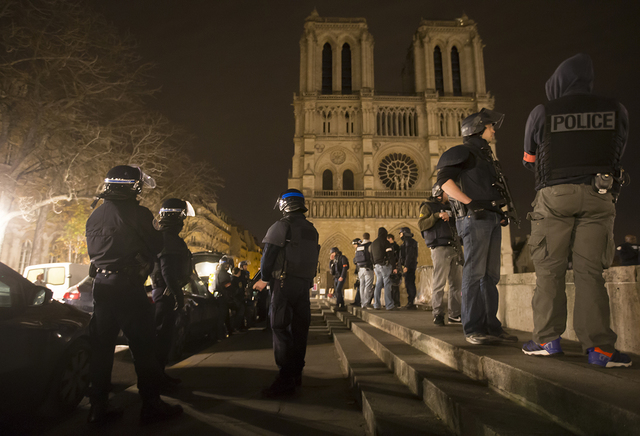 PARIS, France (2nd UPDATE) – Islamic State jihadists on Saturday, November 14, claimed a series of coordinated attacks by suicide bombers and gunmen in Paris that killed at least 128 people at a concert hall, restaurants, and the national sports stadium.

The statement, published in both Arabic and French, threatened further attacks against France “as long as it continues its Crusader campaign.”

It said the targets of Friday’s attacks, which included the national sports stadium and the Bataclan concert hall, “were carefully chosen.”

It added France was guilty of “striking Muslims in the caliphate with their aircraft,” referring to its air strikes in Syria which started in September.

French President Francois Hollande had blamed ISIS, calling the coordinated assault an “act of war… committed by a terrorist army, Daesh, against France”, using another term for ISIS.

Hollande also blamed the Islamic extremist group and called the coordinated assault on Friday night at 6 different sites an “act of war.”

At least 8 militants, all wearing suicide vests, brought unprecedented violence to the streets of the French capital in the worst attacks in Europe since the 2004 Madrid train bombings.

In the bloodiest part of a night of violence, 4 men armed with AK47s and shouting “Allahu akbar” stormed into a rock concert at the Bataclan concert hall in eastern Paris, gunning down at least 82 people and taking dozens hostage.

“They didn’t stop firing. There was blood everywhere, corpses everywhere. Everyone was trying to flee,” said Pierre Janaszak, a radio presenter who was at the concert by US rock band Eagles of Death Metal.

The gunmen were heard raging at Hollande and his decision in September to begin air strikes on Islamic State jihadists in Syria. (READ: Witnesses tell of ‘bloodbath’ at Paris rock concert)

French officials have spoken frequently of their fears that hundreds of French citizens thought to be fighting with IS in Syria and Iraq would return to France and launch attacks.

France has taken part in US-led air strikes on IS targets in Iraq for over a year and in September began bombing the jihadists in Syria, claiming to have hit a training camp and an oil installation.

The death toll of 128 does not include the eight attackers, the first suicide bombers to strike in France.

The assault also left at least 250 wounded, 100 of them seriously.

Hollande said the multiple attacks across Paris were “an act of war… committed by a terrorist army, Daesh, against France”, using another term for IS.

France has been on high alert since January when jihadist gunmen killed 17 people in Paris in attacks targeting satirical magazine Charlie Hebdo and a Jewish supermarket.

Another disaster was narrowly averted in August when a gunman was overpowered on a packed high-speed train in northern France.

No arrests had been made by early Saturday morning and the country was in a state of emergency, decreed by Hollande on Friday night.

Police were screening hours of CCTV footage of the attack sites and were attempting to identify the body parts of the attackers.

As a precaution, sports events were cancelled in Paris, while public schools and many museums were closed.

Hollande himself had to be hastily evacuated from the Stade de France stadium when suicide bombers struck outside during a friendly football international between France and Germany.

At first, few of the crowd appeared to grasp the significance of what was happening and the game continued. When news began filtering in, people surged on to the turf in chaotic scenes.

US President Barack Obama led a chorus of global condemnation, saying it was “an attack on all of humanity”, and New York lit the new World Trade Center in the red, white and blue of the French flag in sympathy.

Obama is one of dozens of world leaders expected to attend key UN climate talks just outside the French capital from November 30.

Authorities had already tightened security at France’s borders on Friday, hours ahead of the carnage in Paris.

The worst of the killing occurred at the Bataclan music venue in the trendy 11th arrondissement where more than 1,000 rock fans were at the sell-out show.

As screams rang out and survivors ran over the injured or dead to make their ways to the exits or places to hide, the militants took hostages and began executing them.

“We heard people screaming – the hostages particularly – and the threats from the kidnappers,” said another survivor, 34-year-old Charles.

Along with around 20 others, he fled to a toilet where he pushed through the ceiling and hid in the cavity.

Three of the militants blew up their explosive belts as heavily armed anti-terror police raided the venues around 2330 GMT, while a 4th was shot dead.

Another attacker blew himself up in nearby Boulevard Voltaire, as the streets were filled with the sound of police sirens and convoys of ambulances shipping hundreds of injured to hospital.

A police officer who took part in the storming of the building told AFP: “It was horrible inside, a bloodbath, people shot in the head, people who were shot as they were lying on the ground.”

Several restaurants near the concert hall were also targeted, including a popular Cambodian eatery in the trendy Canal St. Martin area, where bars and restaurants were thronged with young revellers.

An extra 1,500 soldiers were mobilized to reinforce police in Paris, Hollande’s office said.

Other reactions were a mix of fear and defiance.

Concert-goer Charles, who spoke to AFP at the Bataclan, said he would refuse to be cowed by the scenes of terror he had experienced.

“Life goes on. We won’t give in to fear,” he said. “I’m going to a concert on Tuesday. Keep rocking!”