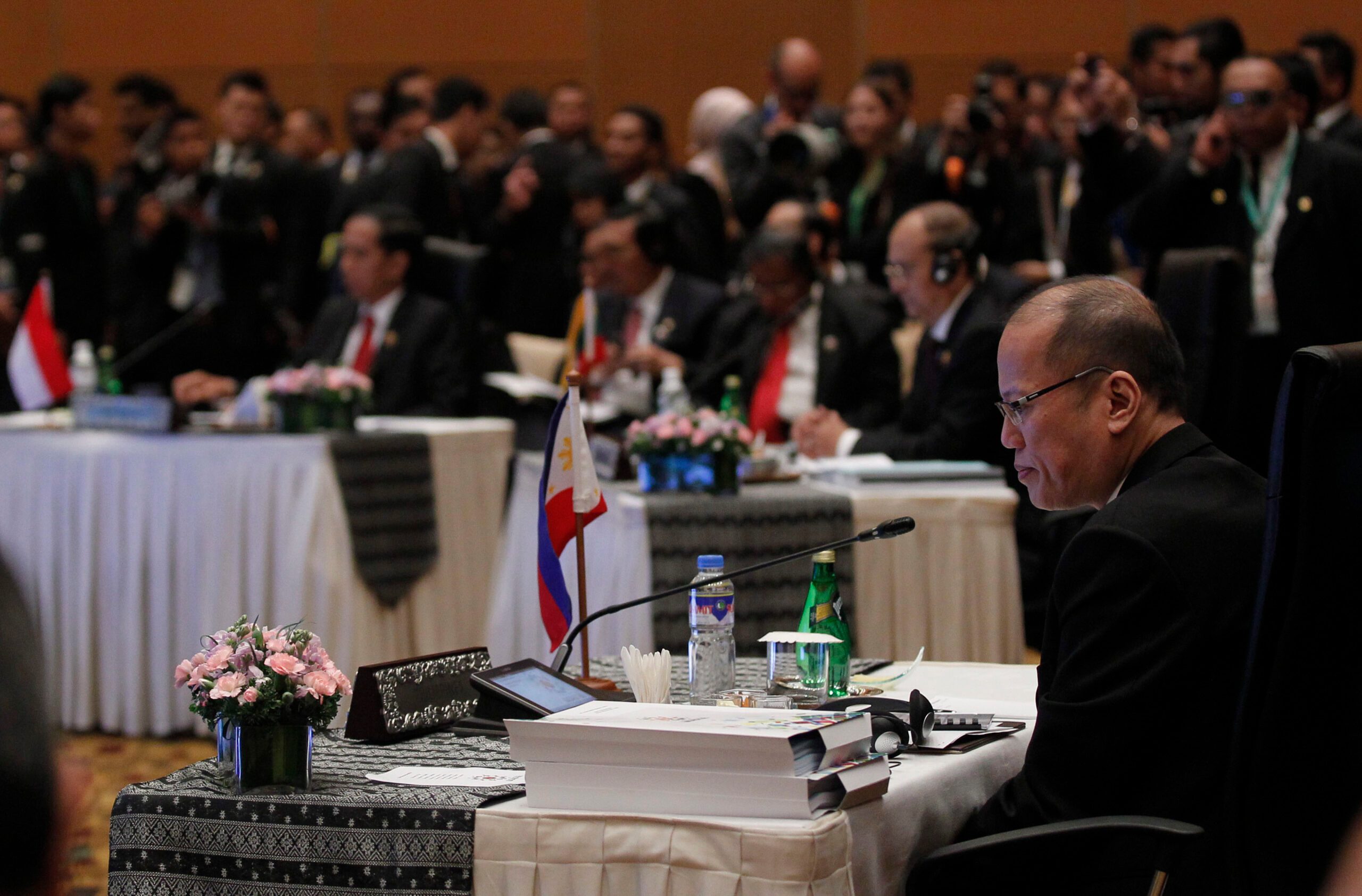 Facebook Twitter Copy URL
Copied
President Aquino says Beijing must ensure the swift establishment of a Code of Conduct on the South China Sea, given its growing economic and political clout in the region

Aquino addressed the call to Chinese Premier Li Keqiang during an intervention at the Association of Southeast Asian Nations (ASEAN) annual summit with China here at the Malaysian capital on Saturday afternoon, November 21.

In clear, strong language, the Philippine leader said Beijing must ensure the swift establishment of a Code of Conduct on the South China Sea considering its growing economic and political clout as an Asian superpower.

“Is it not therefore reasonable to expect China to take the lead in pushing for mechanisms that ensure stability, so that a peaceful rise may truly be achieved, not only by China, but for the entire region?”

Aquino pointed out that it has been 13 years since ASEAN adopted the non-binding Declaration on the Conduct of Parties in the South China Sea, which urges parties to “exercise self-restraint” so as not to complicate or escalate disputes.

Philippine observers including Senior Supreme Court Associate Justice Antonio Carpio have said that the code has yet to be finalized because China was supposedly “dragging its feet” on the issue.

Aquino said: “We should not wait any longer to establish the Code of Conduct and reinforce, without ambiguity or reservation, our political will with respect to the issue.”

Aquino also cited Beijing’s history as a factor that should drive the Asian giant to take leadership on the pact.

“All of our cultures tell us of the value of respecting elders; China claims to be among the oldest civilizations. We therefore hope that it sets an example for the rest of the region and take the lead in promoting harmony among neighbors.”

This is the second time on Day One of the ASEAN and related summits that Aquino raised the maritime row. He refused to discuss the issue when he hosted Chinese President Xi Jinping during the Asia-Pacific Economic Cooperation (APEC) summit in Manila.

The President first spoke during an intervention at the ASEAN Summit involving only the leaders of the 10-member bloc. There, he urged his fellow ASEAN leaders not to allow China to claim almost the entire resource-rich sea without basis in international law.

ASEAN members Vietnam, Malaysia, and Brunei also have claims to the sea, which is a vital shipping lane, fishing site, and a potential rich source of oil and gas.

“Excellencies, at this point when we are trying to manage issues, does not conducting massive reclamation and building of structures in contested waters make our collective task harder? We believe it does,” the President said.

Aquino said rocks, reefs and shoals that once had limited use now “potentially have a lot of use in so many different areas,” possibly referring to military advantages. China has constructed runways in some of the features.

Aquino said: “Such a situation makes the give-and-take more difficult for parties involved, making a previously complex issue even more complex. None of us benefits in the long run; therefore, such actions should be stopped. This, at the very least could return the issue to more manageable levels.”

On Wednesday in Manila, US President Barack Obama made the same call for China to stop its land reclamation. Obama issued the statement after a bilateral meeting with Aquino. The US and the Philippines are treaty allies. In 2014, they signed a military deal still pending before the Philippine Supreme Court.

In the first part of his speech, Aquino explained why he issued his message during the ASEAN-China summit.

The summit is an annual meeting between the regional bloc and China to allow the two parties to deepen relationships and discuss cooperation at a high level.

Aquino said as a founding member of ASEAN, the Philippines pursued ASEAN centrality, meaning it tapped the regional organization as a means to address disputes like the sea row. In contrast, China prefers bilateral talks between individual countries as a mode of settling the dispute.

“Within this context, we recognize the important role of the ASEAN–China Dialogue Partnership in promoting peace and prosperity. In the face of the challenges to the global economy, the value of a stable and dynamic ASEAN-China relationship cannot be understated,” Aquino said.

The President stressed that ASEAN-China engagements must be based on dialogue “guided by obligations enshrined in international law and relevant instruments.”

Citing the UN Convention on the Law of the Sea, Manila filed a historic arbitration case against Beijing to strike down its controversial 9-dash line. China uses the line to claim practically all of the sea. Hearings on the merits of the case will start next week, days after the ASEAN Summit.

“We believe that it is incumbent upon all actors to pursue common interest through mutual respect and understanding, which have been cornerstones of our relationship throughout history,” said Aquino. – Rappler.com