Facebook Twitter Copy URL
Copied
At a summit in Kuala Lumpur, Obama repeats his call for China to stop reclamation, and forges a partnership with ASEAN on areas like maritime security

Obama forged a strategic partnership between the US and the Association of Southeast Asian Nations (ASEAN) on Saturday, November 21, as he met with leaders of the 10-member bloc at an annual summit here.

The deal elevates American relations with ASEAN at a time some members face growing aggression from China over the long-running dispute over the South China Sea.

Obama highlighted ASEAN’s role in peacefully resolving the dispute, and repeated a call he issued in Manila for Beijing to stop its artificial island-building.

“For the sake of regional stability, claimants should halt reclamation, new construction, and militarization of disputed areas,” Obama said in the meeting at the Kuala Lumpur Convention Centre.

“ASEAN plays a vital role in advancing a rules-based order for the Asia Pacific,” he added.

Obama also applauded ASEAN for working to create a legally-binding code of conduct. The statement came just hours after Philippine President Benigno Aquino III urged China to take the lead in finalizing the much delayed agreement.

ASEAN members Philippines, Vietnam, Brunei, and Malaysia all have claims to the resource-rich sea. China insists it has “indisputable sovereignty” over practically the entire sea, and built artificial islands on 7 disputed reefs to support military outposts, piers or runways.

Obama and ASEAN leaders also included the maritime row in their joint statement on the ASEAN-US Strategic Partnership.

“We reaffirm the importance of maintaining peace and stability, ensuring maritime security and safety, and freedom of navigation including in and over-flight above the South China Sea,” the leaders said.

“We reaffirm the collective commitments contained in the Declaration of the Conduct of Parties in the South China Sea (DOC) to ensure the resolution of disputes by peaceful means …. without resorting to the threat or use of force and while exercising self-restraint in the conduct of activities.”

The 2002 Declaration of Conduct is a non-binding agreement. The US and ASEAN said they support ASEAN-China efforts to swiftly seal a legally-binding deal. 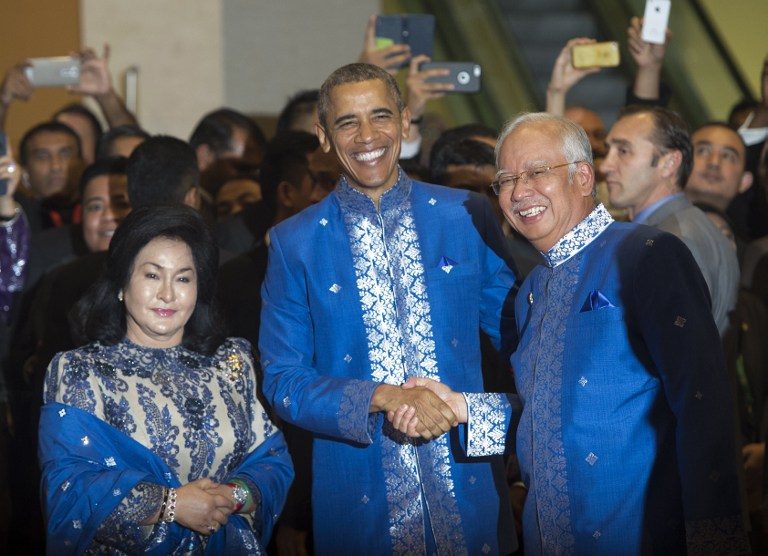 US, ASEAN ‘closer than ever’

The strategic partnership deepens ASEAN-US relations at a time China also seeks to strengthen its ties with the organization through infrastructure and development projects under its One Belt One Road initiative.

The ASEAN-US pact focuses on 5 priority areas of cooperation:

Obama said the strategic partnership made the US and ASEAN “closer than ever.”

He congratulated ASEAN on the formation of the ASEAN Community by year-end, which the bloc will endorse through a leaders’ declaration on Sunday, November 22.

The ASEAN Economic Community aims to create a single market and production base to facilitate the free movement of goods, capital, services and labor across the region.

“We are already a major investor in ASEAN,” Obama said. “We do an enormous amount of trade. You will continue to have the support and partnership of the United States.”

According to the White House, the US and ASEAN traded $254 billion in two-way goods and services. US foreign direct investments in Southeast Asia totaled $226 billion in 2014, the largest of any nation.

“ASEAN, like the rest of the Asia Pacific, is increasingly feeling the effects of warmer temperatures.   Almost all the countries here today have submitted their post-2020 climate targets.   So working together, I believe we can achieve an ambitious and durable climate agreement in Paris,” he said.

Formal ASEAN-US ties began in 1977. The US became the first non-ASEAN country to appoint a resident ambassador to ASEAN in 2010. In 2011, it also joined the East Asia Summit, tackling political and security issues among ASEAN and its dialogue partners. ASEAN-US summits began in 2012. The Philippines’ Aquino commended the US’ role in “promoting a level playing field” in maritime security.

A treaty ally of the Philippines, the US sent a destroyer and bomber planes near China’s artificial islands to show that the area remains international waters.

‘We acknowledge the statements and actions of the US in support of [the rule of law], and welcome the contributions of every responsible nation in rejecting unilateral actions that have changed the status quo and violated international law,” Aquino said in an intervention at the ASEAN-US Summit.

The Philippines resorted to arbitration to resolve the maritime dispute. Hearings on the merits of the case begin this week, just days after the ASEAN summits with the US, China and other partners wrap up this weekend. – Rappler.com