Aquino to China: Why bar us from our own waters? KUALA LUMPUR, Malaysia – “It has come to a point wherein we are now no longer allowed to enter areas within our Exclusive Economic Zone.”

At the East Asia Summit here on Sunday, November 22, Aquino detailed incidents of Chinese aggression in the disputed sea. He urged Beijing to comply with an impending ruling on the Philippines’ historic arbitration case.

It was the 8th time that Aquino mentioned the maritime row in the two days of the ASEAN summit and related meetings. The 27th ASEAN Summit in the Malaysian capital is Aquino’s last as his term ends in 2016.

Two days before the resumption of hearings at The Hague-based arbitral tribunal where the merits of the case is up for discussion, Aquino cited the previous statement of Chinese President Xi Jinping that Beijing has no plans to “militarize” the dispute.

“As the arbitration process we have entered into continues to its logical conclusion, we are hopeful that China would honor its word and respect the rule of law,” he said.

China has said it will not abide by the tribunal’s ruling, which could come out by mid-2016.

Still, Aquino recognized what he called the “growing support” for arbitration from the international community. Obama is among the world leaders who expressed support for arbitration as a peaceful means of dispute settlement.

Despite Li’s presence in the room, Aquino called out China by name.

“It is regrettable that China continues to massively reclaim and build structures in the sea known by many names, in total disregard of international law as well as the Declaration on the Conduct of Parties in the South China Sea,” he said.

Aquino was referring to a pact ASEAN and China agreed upon in 2002, which still lacks a legally binding mechanism called the Code of Conduct 13 years later.

On Saturday, the Philippine president said China must take the lead in finalizing negotiations on the Code of Conduct as a more powerful, richer, and older nation.

‘Our fishermen are losing livelihood’

Aquino began his discussion on the maritime dispute by enumerating the times China violated the Philippines’ rights under the UN Convention on the Law of the Sea (UNCLOS). Under UNCLOS, a country has the exclusive right to exploit resources like fish and oil within a 200 nautical-mile Exclusive Economic Zone (EEZ).

“I have also had to respond to fishermen in my country, complaining about how they can no longer fish in their traditional waters; they ask for explanations why they can no longer take shelter within Scarborough Shoal during times of inclement weather,” he said. 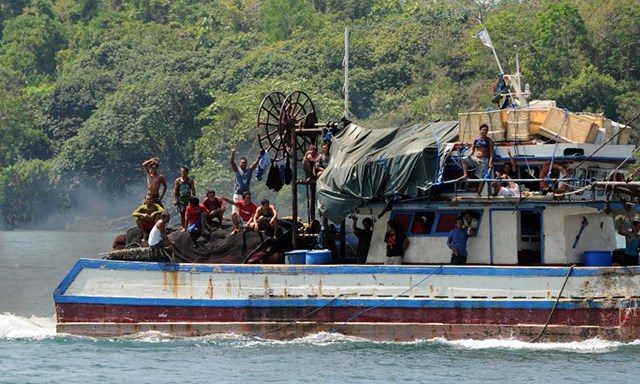 Aquino was referring to the shoal that was the subject of a standoff between Manila and Beijing in 2012. China’s refusal to withdraw from Scarborough Shoal ultimately prompted Aquino to order the filing of the arbitration case.

The Southeast Asian leader said that the first incident of Chinese aggression under his watch was when Chinese vessels forced a survey ship that won a service contract from the Philippines out of the Reed Bank, an area 80 miles from the Philippine island of Palawan.

Aquino reported that another incident was when Chinese fishing boats were caught carrying endangered species just 120 miles from the Philippine province of Zambales.

A recent event was when a Chinese Navy frigate allegedly challenged another survey ship conducting studies on an awarded contract about 40 nautical miles from Palawan.

“We had been asked not to make these incidents public, and we agreed, in an effort to deescalate the situation. However, the incidents did not cease,” Aquino said.

Aquino again brought up the dispute in the ASEAN summit with Japanese Prime Minister Shinzo Abe. Japan also has a row with China over the Senkaku or Diaoyu islands in the East China Sea.

The Philippine chief executive noted that Japan consistently supported the Declaration on the Conduct of Parties in the South China Sea, and the establishment of the Code of Conduct.

“Japan has taken a strong stand against the use of intimidation, coercion, and force, as well as unilateral actions that seek to change the status quo in the disputed areas,” he said.

Aquino highlighted the arbitration case, this time in the ASEAN summit with UN Secretary-General Ban Ki-Moon.

The President said the Philippines filed the arbitration case because it believes in international rules and norms.

With his interventions, Aquino made the maritime row the central theme of his participation in the ASEAN summits.

Security officials have said that the dispute is the Philippines’ biggest national security issue. – Rappler.com