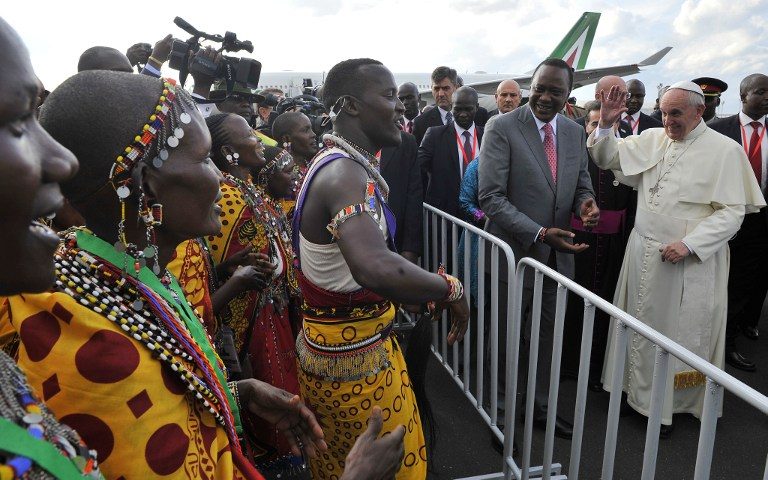 Facebook Twitter Copy URL
Copied
(UPDATED) Francis says he has come with 'joy' to make his first visit to Africa, and plays down safety fears, joking he is 'more worried about the mosquitoes'

NAIROBI, Kenya (UPDATED) – Pope Francis warned poverty fueled “conflict and terrorism” as he kicked off a landmark first trip to Africa on Wednesday, November 25, landing to a rapturous welcome from cheering crowds and traditional dancers.

After joyous celebrations in Nairobi where some greeted Francis in traditional feather headdresses, bright clothes, and beads, the 78-year-old pontiff went to Kenya’s presidential palace to deliver a more somber message.

“Experience shows that violence, conflict and terrorism feed on fear, mistrust, and the despair born of poverty and frustration,” he said alongside President Uhuru Kenyatta.

“I encourage you to work with integrity and transparency for the common good, and to foster a spirit of solidarity,” he said in comments alluding to the corruption and inequality that blights the country.

Kenyatta called corruption a scourge and said his administration was committed to fighting it. “We sacrifice our people and our environment in the pursuit of illegal profit,” he said.

Days before a key UN climate change summit in Paris, COP21, the leader of the world’s 1.2 billion Catholics warned the world was facing a “grave environmental crisis”.

“There is a clear link between the protection of nature and the building of a just and equitable social order,” said Francis who has taken on a vocal role in environmental issues.

His message is likely to resonate in Africa where climate change is already felt and where wildlife poaching is rampant.

‘More worried about the mosquitoes’

The pontiff will also visit Uganda and troubled Central African Republic (CAR) before flying back to Rome on Monday, November 30.

On a trip fraught with security concerns, thousands of police and troops have been deployed, with key roads closed in the capital Nairobi to ensure the visit is peaceful.

Al-Qaeda’s East Africa branch, the Shebab, have launched a string of attacks against Kenya because they have troops deployed in Somalia.

But Francis said he had come with “joy” to make his first visit to Africa, and played down safety fears, joking he was “more worried about the mosquitoes.”

Over a million people are expected to attend a giant open air mass led by Francis in Nairobi on Thursday, November 26, which has been declared a public holiday.

A packed schedule will see the pope visit a Nairobi slum, a shrine to Christian martyrs in Uganda and both a mosque and a refugee camp in CAR. He will make a total of 19 speeches, including one on the environment.

Security chiefs in Kenya and Uganda insist all preparations have been made, although the CAR leg of the trip remains more risky.

Until now, the plans remain in place despite warnings from French peacekeepers that they cannot guarantee the pontiff’s security.

Vatican officials say a last-minute change of program will only take place if Francis is made aware of a precise threat that could endanger the thousands of believers expected to come and see him, many of whom will be traveling long distances from neighboring countries.

Francis is expected to use his open-topped Popemobile during the trip, although he rode from Nairobi’s airport in a simple saloon car.

Aides say he is determined to press ahead with his plans, particularly in CAR where he is due to open a “Holy Door” in Bangui’s cathedral 10 days before the start of a Catholic Jubilee Year dedicated to forgiveness and reconciliation.

Francis is the fourth pope to visit Africa, a continent which now counts one in 6 of the world’s Catholics and whose importance to the Church is set to grow significantly over the coming decades.

Paul VI became the first pope of modern times to set foot in Africa when he visited Uganda in 1969, while John Paul II, dubbed “The African” by a senior cleric, managed to visit a total of 42 countries on the continent during his long papacy.

With the Paris summit due to begin on November 30, there will be particular interest in Francis’s remarks on the environment Thursday when he visits the Nairobi headquarters of the UN’s Environment Programme (UNEP) and Human Settlements Programme (UN-Habitat).

In Uganda, he will honor Christian martyrs, celebrating a mass to commemorate the first African saints – 22 young men burned alive in 1886 by royal order because they refused to renounce their faith or become sexual slaves. – Jean-Louis De La Vaissiere and Peter Martell, AFP / Rappler.com