Climate negotiations move to next round 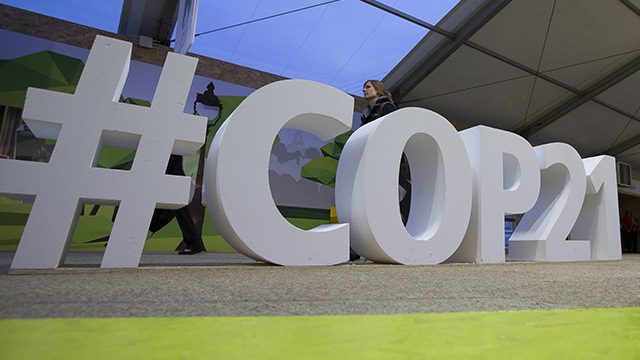 Facebook Twitter Copy URL
Copied
(UPDATED) Dean Tony La Viña, spokesperson for the Philippine delegation in Paris, says all the elements the country wants are included, among them the 1.5 degrees-Celsius cap

PARIS, France (UPDATED) – The United Nations on Saturday, December 5, Day 6 of the marathon climate negotiations here in Paris, released the draft of a climate deal, transitioning into the next phase of the historic talks that seek to combat global warming.

As promised during its unprecedented meeting on November 29, the Ad Hoc Working Group on the Durban Platform for Enhanced Action (ADP) released on Saturday, December 5, a blueprint for a pact to protect humanity from the harmful consequences of rampant emissions of climate-altering greenhouse gases.

Despite being riddled with conflicting proposals on most key points, the 21-page draft accord, which was drawn up in 4 years of tough talks, is the skeleton of what has been described as the most complex and consequential global deal ever attempted.

The stakes are high as ministers from across the world will descend here to try starting Monday, December 7, to transform the draft into an agreement that can rein in emissions that trap the Sun’s heat, warming the Earth’s surface and oceans.

Scientists have warned that as temperatures rise, the planet will become increasingly hostile to mankind. Sea levels will rise, consuming islands and populated coastal areas, while storms will become more catastrophic and droughts, more severe.

Dean Tony La Viña, spokesperson for the Philippine delegation in Paris and one of the negotiators, described the reaction of the body that approved the text. “Very good mood, festive even. Hopeful certainly,” he said.

According to La Viña, all the elements the Philippines wanted in the negotiations were included:

In the proposed 21-page Paris agreement, the working group said it “agreed to transmit the text titled ‘Draft agreement and draft decision on workstreams 1 and 2 of the Ad Hoc Working Group on the Durban Platform for Enhanced Action’ contained in annex I to the Conference of the Parties at its twenty-first session for further consideration.”

It also said it “agreed to transmit the text contained in annex II to the Conference of the Parties at its twenty-first session.”

The ADP is tasked to craft an important negotiating text of the COP21 or the Conference of Parties of the UN Framework Convention on Climate Change.

On to ‘political phase’

The talks enter the next phase, which involves “political discussions” among ministers, according to observers.

Negotiators seem confident they can avert a repeat of a similar effort that failed spectacularly in the 2009 edition of the annual UN talks in Copenhagen, which aimed at a post-2012 deal but broke down, riven by recriminations between rich and poor nations.

It was two years after that failure, at Durban in 2011, that nations agreed to try again for a truly universal climate-saving pact.

Any deal emerging from Paris is likely to fall far short of what is needed to cap global warming at 2.0 degrees Celsius (3.6 degrees Fahrenheit) or below.

Poorer countries have demanded finance to pay for the costly shift to renewable technologies, as well as to cope with climate change.

At stake is hundreds of billions of dollars that would need to start flowing from rich to developing nations from 2020, under the planned Paris pact.

The biggest polluting nations, such as the United States and China, want to enshrine a target of 2 degrees Celsius (3.6 degrees Fahrenheit) above pre-Industrial Revolution levels.

But weaker nations most at risk want a much tougher target of 1.5 C, which would require the global economy to transform away from fossil fuels and be fully reliant on renewables by 2050.

There’s still much work to be done 6 days into the negotiations. The text is heavily bracketed, meaning the wording of various sections is contested by negotiators from member countries.

France’s top diplomat, Laurent Fabius, who is presiding over the 195-nation talks for a UN climate deal, earlier reminded negotiators to hasten the process so as to finish the work by December 11.

Since the high-profile event attended by more than 150 world leaders started on November 30, negotiators have been distilling the draft deal.

The COP21 is scheduled to end at 6 pm (1700 GMT) on December 11, but the climate conference is notorious for textual bickering and running over schedule.

But such deadlines are frequently ignored with weary, sleep-deprived negotiators often slogging through the night to get an accord.

– With a report from AFP/Rappler