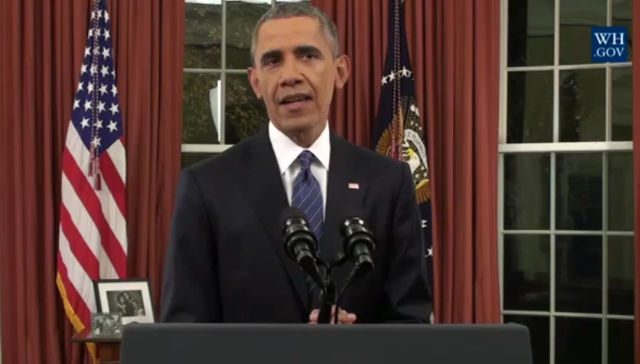 Facebook Twitter Copy URL
Copied
(UPDATED) Facing doubts about his leadership, Obama harnesses the highest trappings of US power to calm a nation put on edge by a rampage in California that killed 14 Americans

WASHINGTON, DC, USA (UPDATED) – US President Barack Obama sought to reassure terror-struck Americans that the Islamic State (ISIS) group will be defeated Sunday, December 6, in a rare primetime address from the Oval Office.

Facing doubts about his leadership, Obama harnessed the highest trappings of US power to calm a nation put on edge by a rampage in California that killed 14 Americans.

“Many Americans are asking whether we are confronted by a cancer that has no immediate cure,” Obama said, striking a notably empathetic tone after an attack that unveiled a new style of homespun threat.

As a father of two daughters, Obama said, he could imagine himself or his kin in San Bernardino or Paris. But the president nonetheless sounded resolute.

“Here’s what I want you to know. The threat from terrorism is real, but we will overcome it. We will destroy ISIL and any other organization that tries to harm us.”

“Our military will continue to hunt down terrorist plotters in any country where it is necessary.”

The president urged Muslims in America and around the world to “decisively and unequivocally reject the hateful ideology that groups like ISIL and Al-Qaeda promote.”

Obama has delivered an Oval Office address – deployed by presidents since Harry Truman to convey resolve in the face of a national crisis – only twice before.

First when the Gulf of Mexico was being flooded with crude oil and later to mark the end of combat operations in Iraq.

His third such address was prompted by the attack in San Bernardino on Wednesday when a young married Muslim couple donned tactical gear and opened fire on an office party full of people they knew, before dying in a hail of police bullets a few hours later.

ISIS has praised the San Bernardino shooters, US-born Syed Farook and his Pakistani wife Tashfeen Malik, as “soldiers” of its self-proclaimed caliphate, while stopping short of claiming outright credit for the attack.

A senior administration official said this decision was designed to convey the seriousness with which Obama was taking the threat.

Obama detailed a multi-pronged strategy against the Islamic State group that will rely as much on community action, technical nous and countering propaganda as military force.

Woven throughout Obama’s address was a plea for unity.

“We cannot turn against one another by letting this fight be defined as a war between America and Islam,” he said, facing down some of his shrillest critics who have called for a registry of Muslim-Americans.

“ISIL does not speak for Islam. They are thugs and killers. Part of a cult of death” he said, “they account for a tiny fraction of a more than a billion Muslims around the world.”

“If we’re to succeed in defeating terrorism, we must enlist Muslim communities as some of our strongest allies rather than push them away through suspicion and hate.”

But he also pressed America’s feuding political factions to rally together.

The latest outrage has prompted little of the patriotism-fuelled solidarity that marked the aftermath of the 9/11 attacks.

After two decades battling jihadism from Afghanistan to Boston, Americans appear increasingly divided on the nature of the problem and how to respond.

Republicans have demanded that Obama back a full-scale deployment of NATO ground forces to Syria and resume controversial interrogations at Guantanamo Bay, which the president wants to close.

Hardline conservatives have also taken issue with Obama’s refusal to use the phrase “radical Islam” which the White House says would confer terrorists the legitimacy of a faith they have betrayed.

The president, elected on an anti-war platform, showed little sign of meeting his political foes in the middle as he reiterated calls for gun control and ruling out a new ground war in Mesopotamia.

“Our success won’t depend on tough talk or abandoning our values or giving into fear. That’s what groups like ISIL are hoping for.”

“We should not be drawn once more into a long and costly ground war in Iraq and Syria. That’s what groups like ISIL want.” –  Andrew Beatty, AFP/Rappler.com