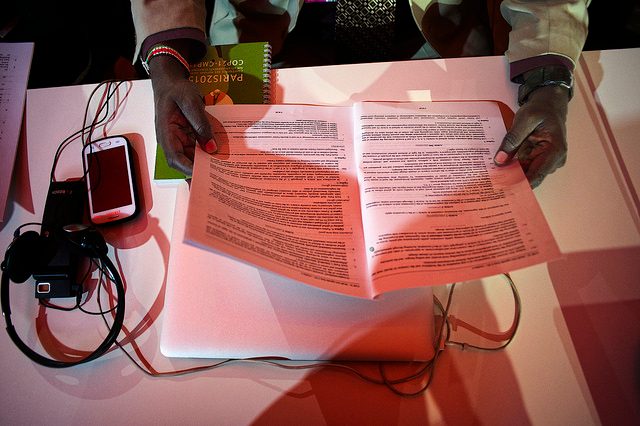 LE BOURGET, France (3rd UPDATE) – A draft of what could be the agreement that will determine the planet’s future is released at the United Nations (UN) climate change conference (COP21), the latest document in the contentious race for a global climate agreement.

France, the host of the crucial climate talks, released the 29-page document on Wednesday, December 9, the latest product of ongoing negotiations at Le Bourget, at the outskirts of the French capital Paris.

Under the auspices of the UN, diplomats from 195 parties are engaged in crunch-time talks to reach a legally-binding agreement to help curb greenhouse gas emissions and limit global warming to below 2 degrees Celsius (3.6 degrees Fahrenheit).

French Foreign Minister Laurent Fabius, speaking at a plenary session of the conference, said the document revealed “emerging compromises” on the way to a historic universal climate deal.

Fabius said the text has been cut down from 43 pages to 29, and that the hundreds of bracketed texts – contentious words or phrases that are the crux of the debates between negotiators on whether to be included in the final text or not – have been reduced by 3/4.

This draft document now goes to the parties for review, and the French organizers of the climate conference aim to have a deal done by the official end of the conference Friday, December 11.

“On several topics we are almost at the end of our efforts thanks to the commitment of the parties,” Fabius told the conference. The newly-released draft “is better,” Fabius said, though there are “still too many” undecided sections.

Despite what he called a “long night” of talks, many contentious phrases and words are still in brackets – and could either be removed or retained based on the progress of negotiations.

For starters, the document still isn’t certain on whether to limit warming to below 2ºC, or below the more ambitious – and many say more critical – 1.5ºC limit.

Climate finance is also still a contentious issue, with countries still debating over who should shoulder the heavy financial burden of climate adaptation.

Fault lines also remain on how to share the burden between rich and poor nations, as well as how to review and scale up efforts to slash greenhouse gases.

Decisions on the most divisive arguments are not expected to be reached until the final moments of the negotiations.

The earlier 43-page document was agreed upon by the parties Saturday, December 5, at the end of the first week of the climate talks – a distillation of 4 years’ worth of negotiations, under the Ad Hoc Working Group on the Durban Platform for Enhanced Action (ADP).

Despite the number of critical sticking points in the talks, there is optimism among negotiators that there will be a global accord by the end of the conference.

“The document contains all that we would like to see in the agreement: an agreement based on solidarity, climate justice, aspirations and ambitions of our country,” Climate Change Commissioner Emmanuel de Guzman, head of Philippine delegation to COP21, said.

“We will have another round of egos on the issues that remain contentious because they are bracketed, that remain as options,” he added.

The Philippine negotiators, like most other country teams, rushed to their office at the conference site to read through each line of the latest draft, comparing differences between the latest version and the one released last Saturday.

The negotiators had a little less than 2 hours prepare before going into a crunch-time meeting discussing each critical article of the document.

Negotiators aimed to be ready with their reaction to the new draft. They may seek to suggest new options or re-wordings that will best advance national interests and those of the G77+China. Host nation France and the negotiators are hoping that this conference will be a far cry from the epic failure of the 2009 meeting in Copenhagen, the last time the world gathered to try to come to an agreement on climate change.

“The goal is still the same: We must reach an agreement on time in order to fight climate change,” Fabius said.

Repeated pledges by world leaders to take decisive action, as well as voluntary pledges by nations to curb their emissions, have fueled the sense of optimism.

Despite this, campaigning groups say they are growing increasingly concerned that world powers, in their rush for an agreement, have been compromising far too much in Paris.

“It looks like countries are appearing to settle for what’s easiest to agree to instead of what’s right for their people and the planet,” said Oxfam Australia’s executive director Helen Szoke.

“Negotiators might be settling for the lowest common denominator in several critical areas.” – With reports from Pia Ranada and Agence France-Presse / Rappler.com