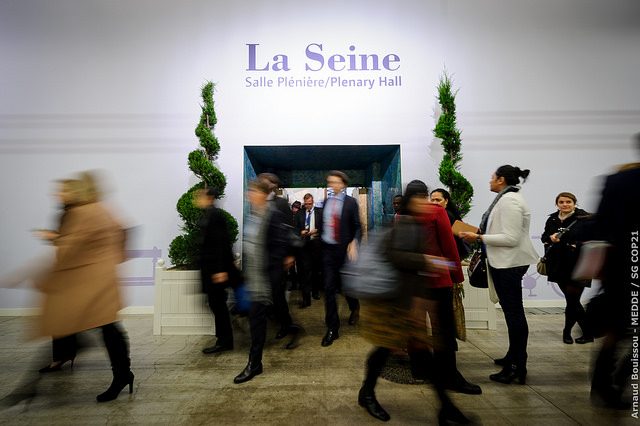 LE BOURGET, France (UPDATED) – The world is now one step closer to a historic climate deal.

The latest draft version of a proposed global climate accord was released late Thursday, December 10 (early Friday, December 11 in Manila), as negotiators hunkered down for another sleepless night in hopes of finally nailing down a universal and legally-binding climate deal.

“We are extremely close to the finish line,” French Foreign Minister Laurent Fabius, acting as the president of the 2015 UN climate change conference (COP21), told negotiators as he delivered the new negotiating text to the assembled delegations.

The new draft document, released at just past 9 pm Central European time (past 4 am Philippine time), is now just 27 pages long, and only has a total of 50 bracketed sections of text – items in the draft that are still under debate and could either be removed or retained in the final deal.

The release of the document was delayed by at least 6 hours – it was originally scheduled to be publicized at 3 pm local time, but was then moved to 7 pm, and then to 9 pm.

As temperatures at the Le Bourget conference site – around 10 kilometers outside the Paris city center – drop to as low as 3ºC, hundreds of negotiators from 195 nations are under immense pressure to finalize a universal and legally-binding deal that would curb global warming to at least below 2ºC (3.6ºF).

Delegations have been given 2 1/2 hours to pore over the new version of the draft agreement, and will then proceed to sessions known as the “Indaba of Solutions,” named after a traditional South African consultation process.

Talks are expected to end in the wee hours of Friday, December 11, and will again resume after a few hours.

Previous UN climate conferences have extended well past their scheduled finishing times, meaning talks could go into the weekend.

However, the French hosts of the conference aim to have an agreement in place on schedule.

“I think I will be able to present final text Friday,” Fabius told the assembled delegates before they went to review the new draft. – Rappler.com