Dec 15, 2015 11:58 AM PHT
Natashya Gutierrez
Facebook Twitter Copy URL
Copied
Jakarta Globe’s explanation as to why they were closing was short and sweet: the high cost of running a paper, as news moves towards the digital age 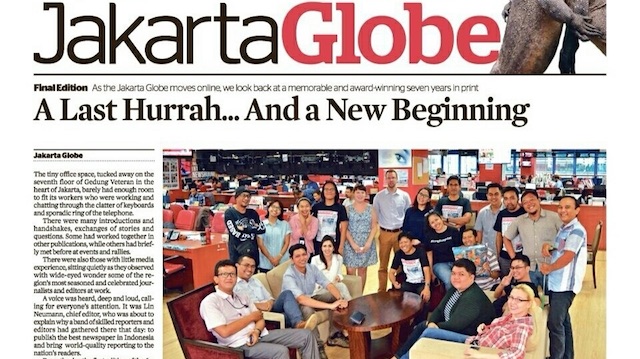 JAKARTA, Indonesia – “A Last Hurrah… And a New Beginning.”

This was the front page of Jakarta Globe on its final print edition on Tuesday, December 15, as it bid goodbye to its readers after 7 years.

“From the day the first edition of the Jakarta Globe was published on November 12, 2008, we have pursued stories that mattered, that shaped people’s lives and guided decision makers in making informed choices,” the newspaper said on its front page article.

The newspaper went on to outline the various topics it has covered including the terror attacks in Jakarta, the 2009 and 2014 presidential elections, corruption, religious minorities and others. The final edition also included “the best, most memorable articles and photographs” throughout the pages of the paper.

Jakarta Globe’s explanation as to why they were closing was short and sweet: the high cost of running a paper, as news moves towards the digital age.

“Much has happened since our first edition – the ballooning cost of printing and distribution, slumping readership, and the rise of the Internet – but our commitment remains the same: even as we eave behind our print edition, we dedicate all of our resources online,” it said.

The paper vowed to continue their work online, “to offer readers a more germane experience in up-to-date news.”

The Globe is part of the Lippo Group’s BeritaSatu Media Holdings (BSMH), an Indonesian media conglomerate. On the same day, BSMH announced it would invest $65 million in the Globe’s digital move.

“With more than 100 million Indonesians expected to be connected by 2020, BSMH’s digital strategy will capture a market of 10 million readers in six years’ time,” it said in a statement. – Rappler.com