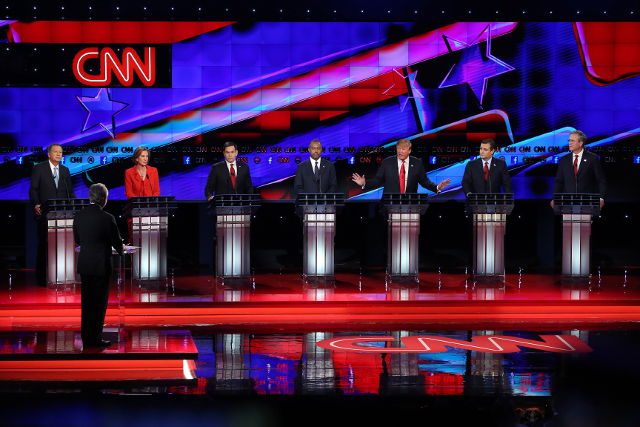 LAS VEGAS, USA – Republican presidential hopefuls put Islamic State (ISIS) jihadists in their crosshairs Tuesday, December 15, as they debated how to keep America safe, with Jeb Bush and others attacking Donald Trump for demanding a ban on Muslims entering the country.

Just weeks after deadly attacks in Paris and San Bernardino, California, Republicans vying for their party’s nomination in the 2016 race for the White House were suddenly confronted with the specter of terrorism on US soil and the steps they would take to defeat ISIS entrenched in Iraq and Syria.

But amid pronouncements that US freedoms are under attack, several of Trump’s rivals aimed criticism at the billionaire real estate mogul during the debate – the Republicans’ fifth and their last in 2015 – over his incendiary anti-Muslim remarks.

“We can’t disassociate ourselves from peace-loving Muslims. If we expect to do this on our own, we will fail,” said Bush, the former Florida governor who came out swinging to try to revitalize his ailing campaign.

“Donald is great at the one-liners,” Bush added, “but he’s a chaos candidate and he’d be a chaos president.”

Senator Marco Rubio, who has been on the rise with 7 weeks to go before voters in the heartland state of Iowa cast the first ballots in the nominations process, dismissed Trump’s ban, saying the proposal “isn’t going to happen.”

Senator Rand Paul piled on. “I think if we ban certain religions, if we censor the Internet, I think that at that point, the terrorists will have won,” he said.

Trump, the tycoon and onetime reality television star who has been the surprise leader of the Republican presidential race, has only gained in popularity since making his abrasive anti-Muslim comments, even as rivals accused him of playing into jihadist hands.

But Cruz stepped gingerly when it came to criticizing Trump, instead clashing at length with Rubio, who described Cruz as an isolationist who has voted against legislation that funds the US military and opposes US boots on the ground in Syria.

Cruz, who represents Texas, insisted that if he were president, “ISIS and radical Islamic terrorism will face no more determined foe that I will be.”

The debate was the first since the Paris and San Bernardino attacks – violence that has brought national security concerns to the fore and heightened Americans’ fears about illegal immigration and Syrian refugees.

Trump was short on specifics about confronting jihadists. He was most prominent when clashing with Bush, who could ill afford another flailing debate performance and held his own Tuesday against Trump as they talked over one another.

“He’s a very nice person,” Trump said of Bush in a backhanded compliment, “but we need toughness.”

“Donald, you’re not going to be able to insult your way to the presidency – and I do have strength,” Bush said.

The prime-time event also featured New Jersey Governor Chris Christie, who said his experience as a federal prosecutor makes him the most experienced in going after terror suspects.

“I will protect America from the wars that are being brought to our doorstep,” he assured viewers.

Christie dueled with Senator Rand Paul over how to handle Russian President Vladimir Putin’s muscle-flexing on the world stage.

Asked if he was prepared to shoot down a Russian plane violating a theoretical no-fly zone over Syria, Christie was unequivocal.

“Not only would I be prepared to do it, I would do it,” he said.

Paul, who opposes a no-fly zone, retorted: “If you’re in favor of World War III, you have your candidate.”

Carly Fiorina, former chief executive of Hewlett-Packard, said she would use her technological expertise to lead the fight against extremism.

And while Ohio Governor John Kasich called for a coalition to bring about the total destruction of the Islamic State group, “we must lead or the job won’t get done.”

Four lower-polling candidates took the stage earlier in an undercard debate, with hawkish Senator Lindsey Graham extending an olive branch to peace-loving Muslims, telling them “you are not the enemy.”

“Donald Trump has done the one single thing you cannot do: declare war on Islam itself,” said Graham, who advocates sending 10,000 US troops to Syria and Iraq to help Arab allies defeat ISIS. – Robyn Beck with Michael Mathes in Washington, AFP/Rappler.com