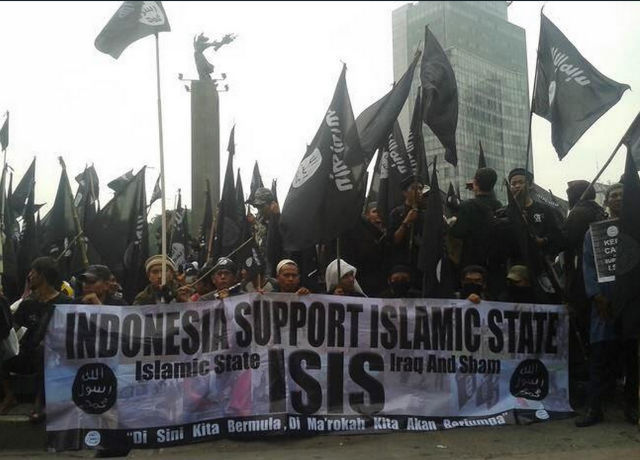 JAKARTA, Indonesia – Indonesian police have foiled a major terror plot with the arrest of several men allegedly linked to a planned suicide bombing in Jakarta during New Year celebrations, according to documents seen Sunday, December 20.

During raids in several cities across Java island on Friday and Saturday, police arrested 5 members of an alleged extremist network and seized chemicals, laboratory equipment and a flag inspired by the Islamic State group. (READ: 4 things you need to know about ISIS in Indonesia)

Among those arrested was Asep Urip, a 31-year-old teacher at an Islamic boarding school in Central Java, and his 35-year-old pupil Zaenal, whom police allege was being “groomed” to carry out an imminent attack.

“From early information, it’s known that Zaenal was a candidate for a suicide bombing in Jakarta to be conducted on New Year’s 2016,” stated police documents into the arrests seen by AFP.

A subsequent raid on the teacher’s house uncovered a black flag inscribed with text “similar to an ISIS flag”, police said, referring to an acronym often used for the jihadist group controlling large swathes of territory in Iraq and Syria.

Elite anti-terror police detained the teacher and the student after swooping on two other men with connections both to the religious school and to expert bombmakers and radicals in other parts of Java.

One of those men, Iwan, had travelled to West Java this month with the intention of building a bomb, police allege.

A 5th man was arrested near the city of Semarang on Saturday, leading to a raid on his home where a wide array of suspect materials was seized including laboratory equipment, chemical textbooks, fertiliser, buckshot and spikes.

Police said the nationwide operation – the largest of its kind in Indonesia for some time – was targeting an organized terror cell.

“These arrests were carried out because of indications these men were involved in a terrorist network,” police documents state.

The raids came just a month after Indonesia increased security at its airports after a threat was directed at one serving the capital Jakarta.

Indonesia, the world’s most populous Muslim-majority country, suffered several major bomb attacks by Islamic radicals between 2000 and 2009, including the 2002 Bali bombings which killed 202 people. But a crackdown has weakened the most dangerous extremist networks.

However the emergence of ISIS has sparked alarm that Indonesians returning from battlefields in the Middle East could revive the networks.

Indonesian police in August arrested 3 people with links to the Islamic State group who were planning to launch bomb attacks during Independence Day celebrations. – Rappler.com