Take a look at the big events around the world in the past 12 months.

7-9: FRANCE – Seventeen people are slaughtered in attacks in Paris on the satirical magazine Charlie Hebdo and a Jewish supermarket two days later.

26: SYRIA – The Islamic State (ISIS) jihadist group is driven out of the Syrian town of Kobane on the Turkish border after more than 4 months of fighting by Kurdish forces backed by US-coalition airstrikes.

12: UKRAINE – The Ukraine government and rebels agree to a “Minsk II” peace roadmap, backed by France, Germany and Russia, but the truce remains fragile. A second truce is signed on September 1. Clashes intensify in early December.

13: VANUATU – Cyclone Pam hits Vanuatu. The cyclone, the most intense in the southern hemisphere for the year, leaves 15-16 people dead.

18: TUNISIA – An attack on the Bardo Museum in Tunis kills 21 foreign tourists and a Tunisian policeman. On June 26 an attack at a holiday resort kills 38 foreign tourists, most of them British, while on November 24 the bombing of a presidential guard bus kills at least 12 people. All the attacks are claimed by ISIS.

23: SINGAPORE – Lee Kuan Yew, Singapore’s founding leader who led the country to prosperity, dies after a long ilness. Lee, one of post-colonial Asia’s most towering political figures, was 91. 24: FRANCE – An Airbus owned by German budget airliner Germanwings crashes in the French Alps with all 150 people on board declared dead. Investigators says co-pilot Andreas Lubitz deliberately crashed the plane.

26: YEMEN – Jets from a Saudi-led coalition bomb Huthi Shiite rebels in Yemen in support of President Abedrabbo Mansour Hadi. The conflict has since left some 6,000 dead.

25: NEPAL – A 7.8 magnitude quake kills around 8,900 people and destroys about half a million homes. A massive aftershock with a magnitude of 7.3 follows in May, killing dozens more. 26: BURUNDI – Deadly protests break out against President Pierre Nkurunziza’s ultimately successful bid for a third term. Hundreds of people are killed in the following months.

23: IRELAND: Ireland becomes the first country in the world to legalize same-sex marriage through popular vote.

29: NIGERIA – Muhammadu Buhari, elected president in March, vows to wage an intense offensive against Boko Haram Islamists, linked to ISIS. The insurgents murder more than 1,500 people since then, however, also carrying out attacks in the neighbouring countries of Cameroon, Chad and Niger.

1: CHINA – A Chinese cruise ship capsizes on the Yangtze river in central China, killing 442 of the 454 people on board.

17: UNITED STATES – A white gunman kills 9 black people at a historic black church in Charleston, South Carolina. The killings follow a series of incidents of police violence against blacks, reviving racial tensions in the United States.

26: UNITED STATES – The US Supreme Court rules that gay marriage is a right in all US states.

28: INDONESIA – The 2015 southeast Asian haze crisis begins, with the first reported incident in Indonesia’s Riau province. The crisis would persist for months, with the haze spreading across the region.

1: UNITED STATES/CUBA – The US and Cuba agree a historic deal to re-establish full diplomatic relations, severed 54 years earlier during the Cold War. 14: IRAN – Iran and major powers reach an historic deal aimed at ensuring Iran does not obtain the nuclear bomb after 18 straight days of talks.

14: SPACE – Pluto is seen up close for the first time, thanks to a close flyby of the New Horizons spacecraft.

12: CHINA – Massive explosions at a chemical storage facility in Tianjin, one of China’s biggest cities, kill at least 165 people. 17: THAILAND – A bomb blast at the popular Erawan shrine in the Thai capital Bangkok, ripping through a crowd of worshippers at the Hindu shrine close to 5-star hotels and upscale shopping malls. Twenty people, mostly foreigners, were killed.

2: EUROPE – The picture of a 3-year-old Syrian boy’s body, washed ashore on a Turkish beach, focuses attention on Europe’s worst migration crisis since the end of World War II.

3: GUATEMALA – Guatemalan President Otto Perez resigns after Congress strips him of immunity over corruption allegations and a warrant is issued for his arrest.

18: UNITED STATES/GERMANY – Auto giant Volkswagen is hit by its biggest scandal ever owing to revelations that it cheated on US pollution tests. 19-22: CUBA – Pope Francis makes a historic visit before going on to the United States. The pontiff also travelled to Kenya, Uganda and the Central African Republic from November 25-30.

24: SAUDI ARABIA – A stampede at the Hajj pilgrimage leaves 2,236 dead at Mina, near Mecca.

30: SYRIA – Russia launches air strikes on Syria, saying its intervention is against the ISIS, while Turkey and its allies say it is targeting moderate opponents of President Bashar al-Assad’s regime.

3: AFGHANISTAN – A US raid on a hospital in the northern city of Kunduz kills 42 during a Taliban offensive on the city. Washington says it is keeping thousands of soldiers in the country beyond 2016 as Afghan forces can not stand up to the Taliban on their own. 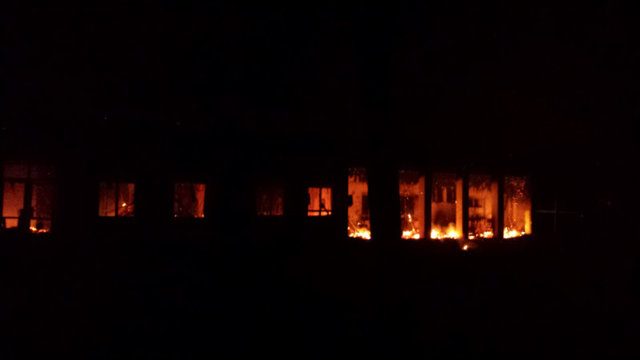 31: EGYPT/RUSSIA – A Russian passenger jet is downed on its way from Egypt’s Sharm el-Sheikh resort to Saint Petersburg, killing all 224 on board. ISIS claims responsibility for what Russia says was a bombing; Egypt says it has no evidence there was a “terror” attack.

1: TURKEY – The Justice and Development Party (AKP) of President Recep Tayyip Erdogan scores a stunning electoral comeback against a backdrop of renewed Kurdish violence and jihadist attacks. They include two suicide bombings on a peace rally in October that killed 103 people — the bloodiest in Turkey’s modern history.

7: CHINA/TAIWAN – The presidents of China and Taiwan exchange a historic handshake and warm words in the first summit since the two sides split in 1949. 8: INDIA – Heavy monsoon rains cause massive floods in the states of Tamil Nadu and Andhra Pradesh. The city of Chennai is the worst hit. More than 400 people die in the floods.

20: MALI – A siege at a luxury hotel in the capital Bamako leaves at least 20 people dead. The attack is claimed by an Al-Qaeda affiliate.

24: TURKEY/RUSSIA – NATO member Turkey shoots down a Russian fighter jet on the Syrian border, saying it had violated Turkish airspace, sparking a bitter diplomatic row between the two countries.

2: UNITED STATES – A radicalised couple massacres 14 people in San Bernardino, California, before they are killed in a shootout with the police.

3: SOUTH AFRICA – South African amputee sprinter Oscar Pistorius, who shot dead his girlfriend in 2013, is convicted of murder after an appeal by prosecutors. He is freed on bail before sentencing, and plans to appeal.

6: VENEZUELA – A center-right coalition wins the first opposition parliamentary majority in 16 years amid an economic crisis in the oil-rich nation.

12: ENVIRONMENT – 195 nations approve a historic accord to stop global warming.

12: SAUDI ARABIA – At least 20 women win seats for the first time in municipal polls, though many restrictions on women remain in the ultra-conservative kingdom. 14: FILM – The highly anticipated Hollywood premiere of Star Wars: The Force Awakens takes place, with some fans camping out for days seeking autographs and pictures.

16: US – The US Federal Reserve raises its main interest rate for the first time in more than 9 years.

18: SYRIA – The UN Security Council unanimously adopts a resolution endorsing a peace process to put an end to the nearly five-year war in Syria, without touching on one of the most contentious issues in the peace effort: the fate of Bashar al-Assad.

18: RWANDA/CONGO – Rwanda votes to change the constitution to allow President Paul Kagame to potentially rule until 2034. In late October in the Republic of Congo, a controversial referendum enabled President Denis Sassou Nguesso to extend his 31-year rule.

21: FOOTBALL – World body FIFA bans president Sepp Blatter and vice president Michel Platini for eight years for suspected corruption, the latest development since seven officials were arrested in a dawn raid in Zurich on May 27. 22: AVIATION – The Falcon 9 rocket becomes the first rocket to successfully be launched into space and return to the ground upright. The launch and landing, operated by the firm SpaceX, is a first in aviation and space engineering.