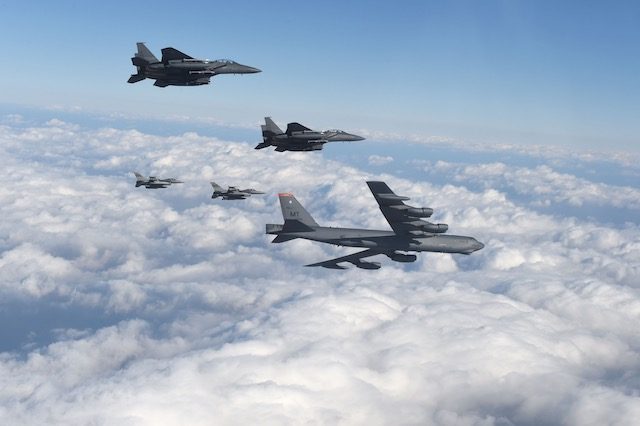 SEOUL, South Korea – South Korea said Monday, January 11, that further US “strategic assets” might be deployed to the Korean peninsula, following a flyover by a US B-52 bomber in response to North Korea’s latest nuclear test.

Seoul also announced additional restrictions on the movement of its citizens to the jointly-run Kaesong industrial park, just a few kilometers (miles) over the border inside North Korea.

The South has taken an uncompromising stance in the wake of Wednesday’s (January 6) test, urging the international community to impose harsh sanctions on Pyongyang, and resuming high-decibel propaganda broadcasts into North Korea.

In a show of strength on Sunday, January 10 a B-52 Stratofortress – flanked by South Korean F-15 fighter jets and US F-16 planes – flew over Osan Air Base, some 70 kilometres (45 miles) south of the inter-Korean border.

The US military said the fly-by was a demonstration of the “ironclad” commitment to its military alliance with South Korea, and a direct response to the North’s fourth nuclear test.

“South Korea and the US are in close consultation about additional deployment of other strategic assets on the Korean Peninsula,” Defence Ministry spokesman Kim Min-Seok told a regular press briefing in Seoul.

US and South Korean media reports have speculated that the nuclear-powered aircraft carrier USS Ronald Reagan – currently based in Japan – as well as B-2 stealth bombers and F-22 stealth fighter jets are among the deployments being considered.

Under the US-South Korea military alliance, there are nearly 30,000 US troops permanently stationed in South Korea, which is also protected by the US “nuclear umbrella”.

South Korea President Park Geun-Hye will make a televised address to the nation on Wednesday, January 13, followed by a rare news conference, her office said.

North Korea claims last week’s test was of a miniaturised hydrogen bomb – a claim largely dismissed by experts who argue the yield was far too low for a full-fledged thermonuclear device.

The test has been widely condemned and the UN Security Council is discussing a new resolution that would tighten sanctions already imposed on the North in the wake of its three previous nuclear tests and banned missile launches.

As well as resuming the propaganda broadcasts, which one top North Korean official warned could bring the peninsula to the “brink of war”, Seoul has also taken measures to restrict movement to the Kaesong industrial park.

On Monday, the Unification Ministry announced that the number of South Koreans allowed to stay overnight in Kaesong was being reduced from 800 to 650.

“The aim is to minimise the presence in Kaesong, while not hampering actual production activities,” a ministry official said.

The Kaesong industrial estate opened in 2004 and currently hosts more than 120 South Korean companies which employ some 53,000 North Korean workers.

The move is apparently motivated by security concerns, with fears that South Koreans staying in the industrial zone could be vulnerable if North-South tensions continue to escalate.

“There has been an increase in troops along the border following North Korea’s fourth nuclear test,” Kim said. “But there are no immediate signs of any imminent provocation.”

North Korea, meanwhile, published a photo Monday of leader Kim Jong-Un posing formally with hundreds of scientists, workers and officials who participated in the latest test.